Rómulo Neto Arquitetos transformed an old school into a facility for the development and promotion of nautical sports in this project. This work, which dynamizes and aims to promote local water sports based on existing infrastructure, is the culmination of a number of small-scale spaces, including a gym, a training room, a dining room, a bar, changing rooms, and medical care.

The project was developed from the moment we accepted the invitation made by the Câmara Municipal of Vagos, to remodel a deactivated primary school, reproduced throughout our country on a large scale in the 20th century, between 1941 and 1969, at the time of the ‘Estado Novo’. We converted it into a training center for the development and promotion of water sports, and we presented our best solution with a reduced budget for the project and work.

In order to accomplish the owner’s objectives, new interior areas were built, but the existing classrooms’ flooring was left in place because of its superior solid pine wood construction. Aluminum panels were made with designs of marine patterns cut in “CNC,” specifically in the separation between the hall and the living room and the bar counter, in order to make the interior resemble the sea. The design of the bunk beds was also a significant task because it included fitting 8 beds into a 33m2 space. They were thoughtfully created in wood and developed so as to provide seclusion, aesthetics, and usefulness. 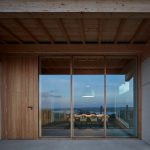 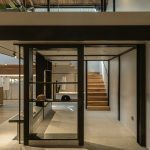