How much does your building weigh, Mr Foster?
Directed by Norberto Lopez Amado and Carlos Carcas
Written and narrated by Deyan Sudjic
Website: www.mrfostermovie.com
The first feature film about Norman Foster founder of the famed Foster + Partners, presents the beginning of a series of Art Commissioners production focusing on iconic figures in art and culture in the 21st century.  View a trailer for this impressive documentary and find more info after the jump:

“How much does your building weigh, Mr Foster?” premiered at the Institute of Contemporary Arts (ICA) Cinema in London on Wednesday 26 January and is on general release at the ICA from Friday 28 January, before touring the country. It is the first feature film about Norman Foster and the beginning of a series of Art Commissioners productions that focus on key figures in art and culture in the twenty-first century.

Tracing Lord Foster’s career, from his childhood in Manchester to the global practice that he founded and chairs, the documentary looks at his architecture, why it matters and how difficult it is to do well. The film uses cinematography to capture the spectacular scale of projects such as the Millau Viaduct, Beijing Airport and Swiss Re, on the big screen for the first time. The Art Commissioners production was directed by Norberto Lopez Amado and Carlos Carcas and written and narrated by Deyan Sudjic.

First launched in February 2010 at the Berlin International Film Festival, the documentary was selected as ‘director’s choice’ in the Berlinale Special. It won the TCM Audience Award for the ‘Best European Film’ at the San Sebastian film festival and was awarded ‘Best International Documentary’ at the Docville international documentary festival in Leuven. “How much does your building weigh, Mr Foster?” has recently been nominated for a Goya Award, Spain’s most prestigious national film prize. 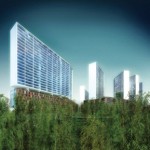