In celebration of its 50th anniversary, the MMCA presents an outdoor project bridging the outdoor spaces of the MMCA Deoksugung and Seoul, and their urban contexts. This exhibition aims to vitalize the exchange of different architectural languages used by artists active in neighboring Asian countries. With the MMCA Seoul’s cultural heritage and historicity as its basis, this exhibition subtitled “Unearthing Future” presents outdoor installation works by Korean and other Asian architects that interpret the different issues in today’s urban environments.

This project is created for a group architecture exhibition by MMCA (National Museum of Modern and Contemporary Art) in Seoul inside the historic Deoksugung Palace. The exhibition takes place from September 2019 to April 2020.

Deoksugung Palace contains the story of a brave emperor who faced a world in transition. Gojong, the last King of Joseon and the first Emperor of Korea, resided here. While welcoming the modernization and industrialization of Korea, Gojong was also facing diplomatic issues and worries of foreign invasion. His life was overlapped with instability and transitions, while hoping to maintain stability.

The history of the Deoksugung Palace reveals a series of overlaps and transitions; Gojong became the Emperor from the King and the nation opened to the West beyond seclusive thinking. William Lim, Founder and Chief Architect of CL3 Architects Limited (www.CL3.com), starts to imagine the life within the palace. While a lot has been written about the buildings, instead William is more interested in the courtyards, the transitional spaces from one building to another. Overlap and transitions become the theme. Lim found a particular interest in the courtyard of Hamnyeongjeon, which was primarily used as Emperor Gojong’s bedchamber, and occasionally functioned as a place for meeting with officials. The courtyard compliments the building as the overlap between the ceremonial and the quotidian. Like the famous Korean drama “大長今” the Korean version of “Downton Abbey”, one can imagine the overlapping paths between the royalty and the servants.

The pushcart has been an ongoing theme for William’s exploration, as this is a dominant component of Asian cities. The mobility of the pushcarts serves multiple purposes and gives a secondary layer of life to Asian cities. With the impact of climate change and the world’s shifting economy, open air activities and outdoor living is becoming more treasured. William’s thesis for this exhibition is to design a series of mobile furniture for an emperor in transition. His furniture pieces will be designed with wheels. The fact that they are on wheels explores the notion of mobility, displacement, migration as well as the overlap of the service and the served.

The series of furniture is conceived on four aspects: The ceremonial, the social, the functional, and the playful. Inspired by the imperial carriages (Palanquin) and traditional Korean furniture, the furniture will be laid out in a ceremonial order in front of Hamnyeongjeon, like attendants ready to serve the Emperor. The mobile furniture takes on an Asian aesthetics and exaggerates the horizontal while relating to physical ergonomics. Incorporating contemporary function such as desking and storage implies a contemporary lifestyle which overlaps with tradition. The playful aspect of some pieces contrasts the somber historic description we learn of the palace.

The pieces include formal seating with a canopy, inspired by the imperial throne, chaise lounge borrowing its profile from Le Corbusier’s furniture, a garden storage unit, bed, and a see-saw piece for recreation. 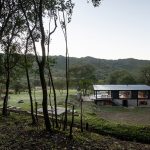 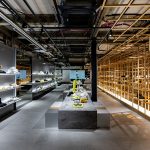