This proposal defines a new icon and a strong identity for the city of Busan and drives a direct link between Korea’s past and Korea’s future image.  In order to do so, the proposed scheme describes the idea of the Korean garden within the building’s shell and the new Opera House within the Korean garden.

The Korean garden is linked to the trees and to the water, but it also concerns the tranquility of the ambience and the strong presence of water within defined boundaries. In the proposal, the boundaries of the artificial, manmade construction lower to the water, in a manner that visitors can have an immediate experience of nature.

The two circles of nature are placed on the pedestrian promenade through the bridge, accomplishing a smooth transition between the city and the new Opera House, through the Korean garden. At the same time the transition from the city to the Opera House is a strong and touching experience, a route that connects Korea’s past and Korea’s contemporary spirit. The main foyer is placed between the circles of nature, with direct sights of the city and the ocean. It is meant to be a sheltered place of transition and rest, as well as a leisure space were different activities can take place. The bridge and the main entrance are aligned with the axis that connects the two circles and the main foyer allows a flow to pass right through the building. A retail route wraps along the west side of the island, arriving at the outdoor space over the sea and at the southwest entrance of the main foyer. The foyer of the Opera House is placed in contact with the water circle at the southwest side of the island, having direct views of the sea. It is also conceived as aninterior garden, with circles of plants defining the routes and the lounges for the visitors.

The island is given the shape of a circle in plan, with two mountainous volumes that sink into the water. The proposal involves a game of strict, absolute shapes in plan and smooth transitions in volume. The design follows the idea of a music island a potentiality of complementary uses, such as retail, and complementary activities, such as listening to music outside, resting in restaurants and cafes, all in touch with the Korean garden. Structure. The  main  structural  system can  be  considered  as a pair of reinforced concrete shell structures. The   thickness of  the   shell   increases  as axial loads accumulate towards the foundation. Especially at the intersection of the hills, a concrete arch is  used  to   compensate  for the interruption of   the shells.

The proposed scheme consists of two main heat pump rooms. Due to the presence of abundant underground water, an underground piping network can be used as a head exchanger to avoid cooling towers. The hot/chilled water is then transferred to local air handling unit rooms, where air duct networks begin. Special provisions are taken for  five dampers and sand traps. 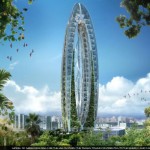 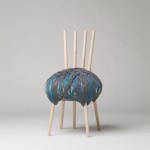