Austin/San Antonio based firm Clayton Korte revealed the design of the State Theatre, a renovation project currently in progress in Austin, Texas. The renovation includes increased capacity and configuration flexibility with seated capacity targeted at 450 and full general admission at almost 600. On the exterior, a rehabilitated Art Deco façade highlights the original 1930s design and celebrates its existing marquee and blade signage, while the interior is reimagined with rich materials and geometric detailing. DIscover more after the jump.

From the architects: Built on Congress Avenue next door to the Paramount, Austin’s original performing arts venue, State Theatre opened as a movie palace on Christmas Day in 1935. Throughout the 1930s and 1940s, the theatre flourished before falling on hard times due to changes in the film distribution industry. In 2000, State Theatre officially merged with the Paramount and formed the Austin Theatre Alliance. Two formerly distinct operational and business models combined the best of both to become one of Austin’s most treasured performing arts resources that produces a range of drama, comedy, music, dance, and spoken-word events. With approximately 300 seats, State Theatre is a genuine downtown Austin venue beloved by performers, patrons, and staff for its approachability, diversity of programs and intimate atmosphere.

The development of a hotel project immediately next door to the theatre prompted a major renovation of the State Theatre and the first significant rehabilitation of the Paramount Theatre since 1979. According to leadership, the singular purpose of the renovation is to give the State Theatre a true reason for its existence; the theatre will serve as an incubator for future Paramount performers and be the entry point for audience segments not yet meaningfully engaged with the Austin Theatre Alliance world.

The renovation includes significantly greater seating and configuration flexibility with seated capacity targeted at 450 and full general admission capacity at almost 600. From a creative standpoint, it is a unique opportunity to re-introduce an 85-year-old building that has virtually no brand history or equity.

The building’s exterior is rehabilitated to better represent the original 1930s design and celebrate its existing marquee and blade signage. The divided light steel and glass infill references a historical photo from 1936. To meet current programmatic needs and code, two new ticketing windows are introduced along with a new pair of egress doors. A new rooftop deck allows for outdoor gathering and offers spectacular views of downtown Austin.

Inspired by the Art Deco façade of the exterior, the interior is reimagined with rich materials and geometric detailing. The double height lobby is reconfigured to provide a tucked bar with a private mezzanine lounge above for exclusive artist meet-and-greets. A new two-sided elevator provides multiple points of connection between the State and Paramount levels and solves a critical accessibility challenge. A dramatic sculptural stair steals the show as it travels through the building, encouraging guests to grab a drink and socialize before heading to their seats. The basement is transformed to allow guests to flow between a new underground bar and lounge and the ground floor of the auditorium. With bars and lounge spaces at each level, the theater’s interior reanimates with activity matching the energy and excitement promised by the exterior marquee and State blade signage.

The auditorium is redesigned to allow multiple seating and lighting levels with audio and projector booths at the rear. Retractable seating replaces fixed seating at the ground floor level and the removal of steel catwalks and platforms overhead allow for the reintroduction of balcony seating. With roughly a 10 foot height difference between the alley and stage, a platform and new mechanical lift provide ease of movement for artists’ equipment. The stage is extended to provide room for backstage functions, a new egress stair, and a connection to the Paramount basement. When the flexible seating is partially retracted, a thrust stage can be configured, creating an intimate setting for a comedy club setup or solo singer/songwriter show. Together with its location and history, increased capacity and a variety of seating and standing configurations will distinguish the theatre from others in the city. 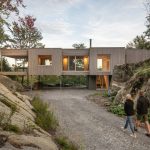