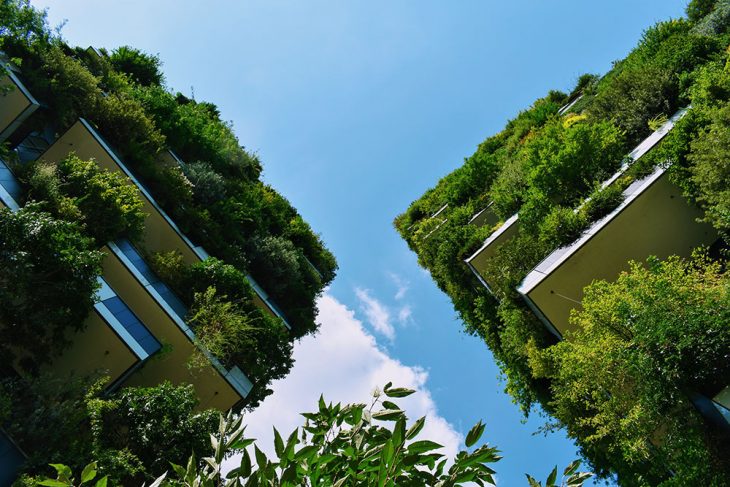 Biophilic design is an extension of the biophilia theory, which recognizes that the human species has evolved for more than 99 percent of its history in an adaptive response to natural factors rather than human-created or artificial causes. We were biologically programmed to recognize and associate with natural aspects and processes.

The term biophilic design is used in architecture to describe a method of increasing occupant connection to the natural environment by including direct and indirect nature, as well as space and place conditions. This kind of approach has several environmental, as well as health and economic benefits for building occupants and urban areas. Greenery, light, water, and other natural features in interiors also have a positive impact on people’s perceptions of space and the amount of time they spend there.

It’s critical to understand that biophilic design is more than just a new approach to make people more productive by employing a cutting-edge technological tool. The effective implementation of biophilic design is dependent on a shift in mindset toward nature and understanding how much our physical and emotional well-being is still directly related to the quality of our connections with the world beyond ourselves, of which we are still a part.

The three pillars of biophilic design are “nature in the space”, “natural analogues” and “nature of the space”. They provide a framework for understanding and intentional implementation of a wide range of methods into the built environment.

“Nature in the space” focuses on nature’s immediate, physical presence in a space or location. Water features, fountains, aquariums, courtyard gardens and green walls or vegetated roofs are some of the most common examples. The most powerful “nature in the space” experiences are created by establishing meaningful, direct connections with these natural elements, notably through diversity, mobility and multi-sensory interactions.

Organic, non-living and indirect evocations of nature are all addressed in “natural analogues”. Objects, colours, materials and patterns found in nature are reflected in the built world as artwork, ornamentation, furniture, décor and textiles.

Our connection to nature has decreased over the years as our lives have gotten increasingly urbanized. However, technological advancements and changing attitudes toward design, as well as some compelling studies on the subject, are resulting in good change, although only in a few ground-breaking projects.

Here are some of the prominent examples of biophilic design in architecture we found: 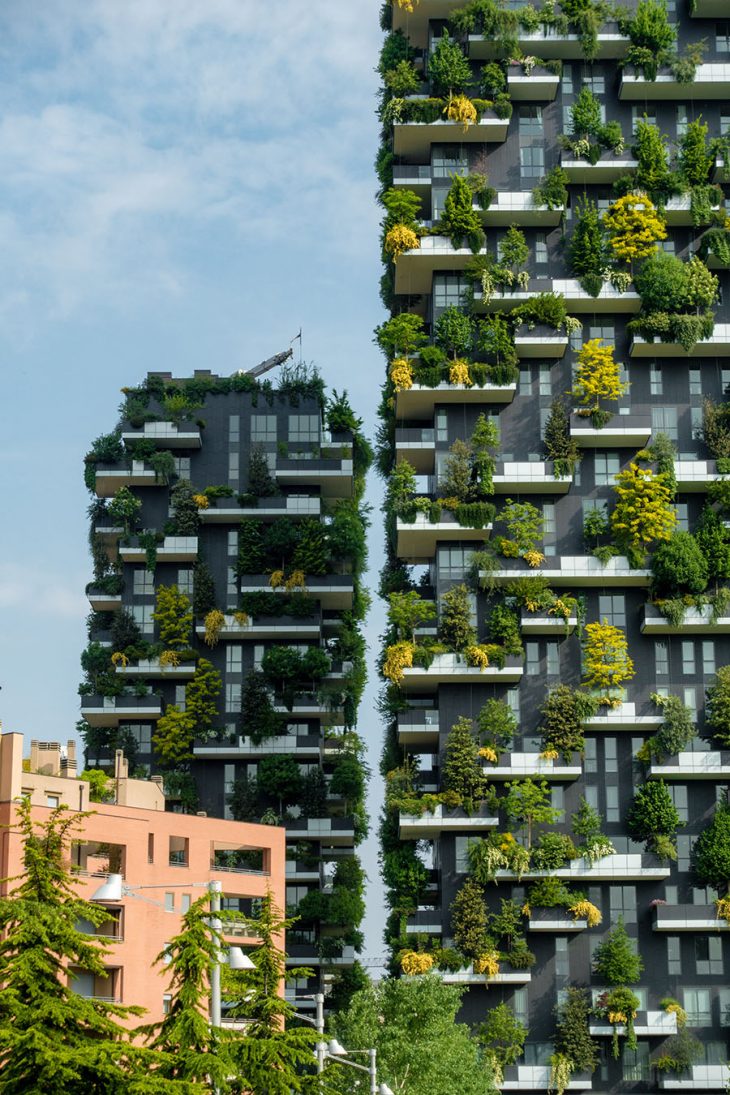 The Bosco Verticale is a pair of residential towers in Milan’s Porta Nuova district. Designed by Stefano Boeri Architetti, these two residential skyscrapers became a key landmark of Milan almost immediately. The architects were inspired by the novel “The Baron in the Trees”, in which the main character decides to abandon the ground and live in the trees.

The twin residential buildings are 111 meters and 76 meters tall, respectively, and are covered in trees and various plants, equating to 10,000 square meters of forest, according to the designers. The plants are totally self-sustaining, thanks to the utilization of renewable energy and wastewater collection. 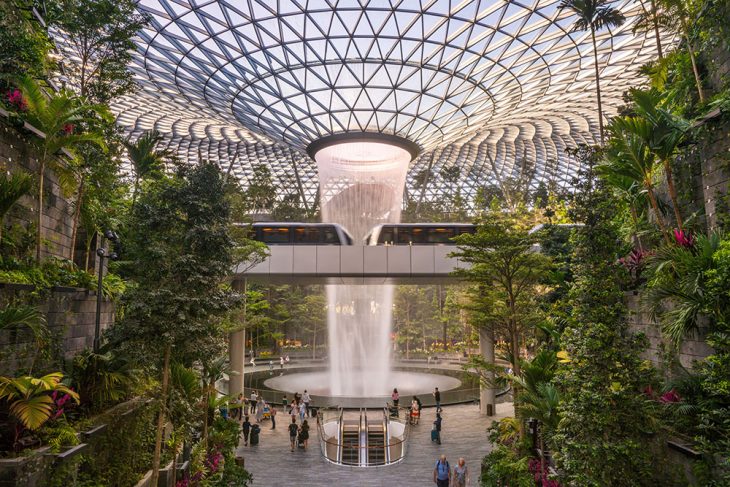 The goal behind Singapore’s ongoing redesign of its urban landscape is to create a city as environmentally friendly as possible. The result is a modern-day exemplar of biophilic architecture. Among many unparalleled biophilia projects, The Jewel stands out as a contemporary model for urban public areas.

On the landside of Changi Airport in Singapore, The Jewel is a nature-themed entertainment and retail complex. The “Rain Vortex”, the world’s tallest indoor waterfall, is the highlight of the promenade, which connects three of the airport’s passenger terminals. This element not only looks impressive, but also helps to ease shopper and traveller fatigue. The building, built by Israeli-Canadian architect Moshe Safdie, was added to a growing list of notable biophilic architecture in Singapore, confirming the tiny island’s image as a nature-infused city-state.

Other features inside the Jewel Terminal include the “Shiseido Forest Valley”, as well as attractions such as the “Manulife Sky Nets” in the elevated canopy park, the “HGdge Maze”, “Mirror Maze” and “Discovery Slides”, demonstrating that airports of the future will no longer be simply places of transit but destinations in themselves.

The Barbican Centre, which houses the magnificent Barbican Conservatory, was envisioned to become a self-contained ideal living and leisure space.

It was built in a area of London that has been devastated during World War II in a brutalism style that featured enormous pieces of building blocks featuring heavy and dramatic lines.

The incorporation of elements such as plants and water, suggestive of a natural pond, produces a beautiful and peaceful juxtaposition with the monumental design of the building.

The Garden House in the City

The “Garden House” was inspired by a home that brings nature back to the city while also encouraging common spaces and social conversation among its members. The design highlights the potential for private urban gardens and the microclimates they produce to improve urban living conditions and decrease global warming.

Green areas are integrated into the house through the planting of gardens on 60% of the ground floor, the use of a green terrace on the first floor, the provision of bee-friendly landscapes, and the planting of 40 different types of native wildflowers. All interior spaces flow outwards and are designed around a central green courtyard sandwiched between two white cubic volumes. Making room for nature in the city not only adds beauty to the urban fabric, but it also supports the return of native bird species and bees. A project such as The Garden House is preserving urban biodiversity, as well as human health and well-being.

ARBORICOLE – The Inhabited Tree For Millennials

With a lush vertical forest conceived as an innovative residential, multi-purpose habitat, Architect Vincent Callebaut, in partnership with Bouygues Immobilier, won the public vote in the “Imagine Angers” worldwide design competition. Arboricole, which translates to “tree” and “cultivation,” is a 50-unit apartment building project with a bar, concert theatre, brewery and art galleries.

By putting people in intimate contact with nature and allowing them to enjoy the urban world more thoroughly, the architects seek to engage individuals into a greater awareness of their environment. 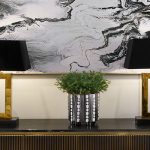 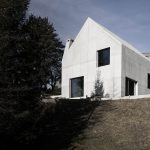