A seat usually consists of many parts and involves complex manufacturing and assembly processes. For some time the studio has been researching the possibilities of simplifying the elements of a seat into only one component made from one material; a single piece of aluminium without any fixtures or fittings. The studio spent eighteen years trying to realise this idea before a facility was located capable of bringing the idea to reality.

A large press capable of exerting up to ten thousand tons of pressure creates the extruded sections by squeezing aluminium through its die (the opening that forms the shape of the profile to be created). Usually the aluminium extrusion process is used to make smaller section components for façade systems, train carriages, automotive parts and so on. Just as when a tube of toothpaste is squeezed, the first and last part come out misshapen, so too with the extrusion process the first and last lengths have unusual and unexpected forms which are conventionally discarded; for these pieces the forms are allowed to exist and are enjoyed for their brutal, sculptural qualities.

Extrusions constituted a show held at Haunch of Venison in October 2009. Seven experimental pieces were shown which comprise the first works that will be derived from fifteen billets of aluminium, to total no more than 200 metres of extrusion, after which the die will be rendered unusable. Each Extrusion will be cut, manipulated and finished under the studio’s direction, and individually signed and numbered by Thomas Heatherwick. 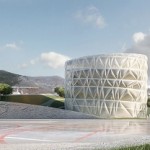 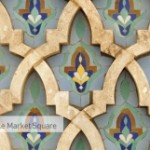