Fractal Transformations deals with the blurring of different software modelling / generating techniques and scripted fractal generators into a spider net-like sculpture. The object deals as visual stimulator for a poetic reaction in human mind; it generates space like a toxic cell, while the human being feels displaced in space, not location. The shadows and light are generating as surreal gap between realizing the statement of a fabric of reality and the will to be inside of the object; to squat the object to touch to feel. The skin mimics an artificial porcelain with its subsurface scattering effect; the reflections of the human as performer are getting blurred on the skin of the object; while in real-time the reflections of the surrounding glass walls are hard and sharp. where is the seduction in AIR? Is Lucy Irigaray still fighting the war of the genders? where is now Heidegger? In there? The blood of the enlightened is white like flashlight in thunders, no red stripes in snow, like an golden ear, van Gogh cut an nice sphere, we are here, what else is there? 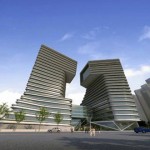 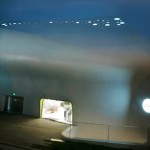