This project sees Professor Eckhard Gerber and his Gerber Architekten team accomplishing one of the most important urban development and cultural projects in the capital, Riyadh. The design functions as the central driving force behind a piece of urban development and rearrangement, and combines the challenge of designing within the existing building stock with respect for Arabian culture. The symbolic cuboid shape of the new building surrounds the existing building on all sides, thus presenting the National Library as a new architectural image in the Riyadh cityscape without abandoning the old building, which now operates as an internal stack, making it the centre of knowledge within the new library as a whole. The square new building is covered by a filigree textile façade following traditional Middle Eastern architectural patterns and linking them with state of the art technology. – from Gerber Architekten

See more of the project below: 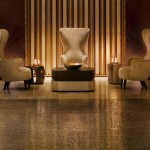 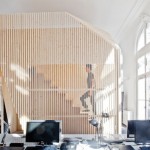