The context in which the Istanbul Disaster Prevention and Education Centre will be located, unlike many of incredible places in the city of Istanbul, does not ask for too much respect.

That’s why we are not fighting with the unnecessary fitting into the environment. Instead of “competing” with large and architecturally inarticulate buildings which surround the place for the construction, we’ve chosen “ignore”. Then we formed a new microcosm, equally traditional and contemporary. Among high rise buildings, we built a flat house.

We are establishing some new/old rules, proposing the space where the visitors and employees will have a bit of a different, better universe. The new urban element is in fact a very old and also characteristic for traditional local architecture confirmed in times by centuries. So that IDPEC would not be unnoticeable right until we come close to it, one lake inside the garden has a high water fountain that makes this site unique and recognizable from bigger distances.

The garden is formed by communication with the length of an athletic track surrounding it.

In it, there are rhythmically alternating specialized areas. Those sections that need more peace for the students are arranged by the outer edge, and the other ones by the internal one, facing the park.

The idea of the atrium is a park, garden, oasis, courtyard, playground and all of this simultaneously, shade under the canopy of trees, water in the lakes, fountain, playgrounds for children and adults. Park is in a function of a hall during the period of nice weather, in case of Istanbul it’s most part of the year.

“Classes” are all different, as a consequence of the program placed inside of them. Above each unit there is a dome, another traditional and at the same time contemporary element, used to place solar panels on the sunny side.

The outer façade of the house is protected by glass brise-soleils and the necessary shade is provided by a system of curtain rails on the ceiling. On the inner side these is a canopy, which reduces the amount of the sun rays. For the same purpose we use the trees which will be very densely planted on the northern edge of the park. Elements of the structure are steel columns that follow the line of the facade and carry a steel grid, all very low-tech.

The building will use any available systems of sustainability, we believe in its pioneering role in this area. 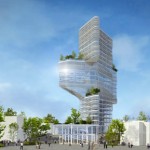 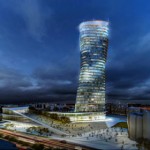