Silicon Valley is revered as the epicenter of relentless innovation and entrepreneurship, but its architectural landscape is an oddly banal place. Companies founded in spontaneous start-up environments—from garages to a friend’s living room—grow up, only to find themselves bound to formula-driven campuses and buildings. And while the technology these companies develop and the way these companies work continue to rapidly evolve, their workplaces often fail to change with them. As a result, a growing number of companies are looking at the typical Silicon Valley office building—with designs based on efficiency and economics—as outdated models for supporting their cultures of work.

Founded on the very principle of being at the forefront with their technology, Silicon Valley visual-computing pioneer NVIDIA wanted a corporate headquarters that reflected their core belief that their people are their greatest asset. With a relentless drive towards constant innovation, work at NVIDIA is increasingly collaborative. This type of work at their current headquarters, however, is hindered by staff located across many small floors in multiple buildings, so NVIDIA has engaged Gensler to design a building that allows staff to work together more efficiently while capturing the culture of their work—a building that is a physical manifestation of the soul of their company.

In fact, research has validated precisely what NVIDIA is experiencing in their current offices. Studies from the MIT Sloan School of Management, for example, show that if two people are separated by floors in a building or by different buildings, the chances of informally meeting during any given day is slim to none. But if these two people happen to be on the same floor, their chances of bumping into each other increases 20 fold. NVIDIA’s co-founder and CEO Jen-Hsun Huang wants a new workplace that actually designs these informal interactions into the building, a home where stairs do not simply connect floors but function as impromptu meeting spaces, and a building where one enters through an activity-filled space that serves as the heart of the buildling rather than a staid formal lobby.

To capture this vision, Gensler is designing phase 1 of NVIDIA’s new headquarters in Santa Clara, a two-story building where the experience of moving through the building is one of unimpeded flow for the estimated 2,500 building occupants. (Phase 2, an identical building on the same campus, will be constructed as needed). The conventional way of planning a building is to start first with thinking of spaces and then how to connect these spaces together. But spaces are inherently confining. Taking a cue from chip design – where the connections for information flow are designed first – the design of each of the two floor plates (250,000 square feet each) is centered around how people move, maximizing the opportunities to connect and enhance collaboration. The design team challenged themselves to create an experience where floor levels are not obstructions but rather unbroken, creating continuous flow. Vertical connections between floors are not designed as stairs but as a series of oversized platforms to accommodate a variety of activities. Enlarged stair treads double as bleacher seating for a casual meeting and over-scaled landings create impromptu meeting places – a veritable ‘stairscape.’

In thinking about the optimal geometry to organize this network of people, the triangle becomes a perfect shape where distances between connections are never too far away nor do people have to travel far to ‘the other side’. The triangle shape also serendipitously symbolizes the work that NVIDIA does. Being a company whose product drives the visual-computing industry, the triangle is the fundamental primitive that defines all shapes in the digital realm.

To house this seamless workplace, the triangular volume is covered by a sculptural roof composed of triangular facets. The roof itself defines not just the outside but the inside of the building, serving to help bring a human scale to the giant floorplate and creating a sense of connectedness throughout the space. The form of the roof is informed by the interior planning of the building where parts of the roof are shaped to create vaulted spaces in shared town-hall community spaces and lowered spaces where private, focus work occurs. Skylights bring ample diffused daylighting into the workspaces and provide for a comfortable work environment.

With this inside-out approach to the design, the building architecture attains an iconic presence as a physical manifestation of NVIDIA’s culture and positions itself as a pivotal project in the transformation of the landscape in Silicon Valley. 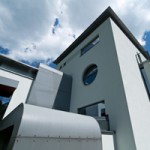 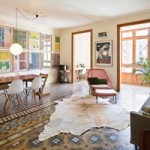