This project changes the manner of inhabiting a flat in Barcelona's Ensanche district through small and very specific operations that make the most of every corner as if dealing with a jigsaw puzzle and giving over the protagonist role to the existing elements, conserving, reusing or modifying them in order to create new spaces that seem to always have been like this.

The project consisted of the integral reforms of a dwelling in Barcelona's Ensanche district that dates from the year 1910 and had never undergone any substantial modification in its 100 years of history. The state of the flat, however, was deplorable, as its previous occupier suffered form compulsive hoarding syndrome and had accumulated all kinds of waste, leaving many of its elements in very poor condition. The ceilings (with magnificent rosettes and mouldings) and the floors (hydraulic paving made from small ceramic pieces) had been conserved relatively well, as was the case with some of the original joinery.

The starting point therefore consisted of conserving a layout that would permit the suite comprising the magnificent existing ceilings and floors to be maintained, concentrating any necessary changes required by the new programme on the spaces that did not possess such characteristics.

In order to meet this objective the work was done room by room in an attempt in each case to adapt the new programme to the rooms defined by ceilings and floors, recessing wardrobes or shifting partitions without modifying the limit of the rooms so that they would gain in functionality without losing their original limits. All the joinery has been conserved in either its original position or by shifting it to new rooms opened up in the flat's "interior" volume, always respecting the original position of the floors and windows giving on the patio.

The generous height of this flat has been made use of to raise the floor of the en-suite bathroom by 60 cm, making room in a single space for the bath underneath the shower as well as a very useful storeroom-pantry underneath the floor, accessible from the corridor and next to the kitchen. This raising of the bathroom also means that in order to access it three steps have to be climbed from the bedroom, giving the flat a greater feeling of "domesticity" by introducing an element that is more typical of a detached family house than of a single-story flat.

A characteristic space of this reform is the long internal corridor, quite common on this dwelling typology of Barcelona's Ensanche. This space had an ideal width for converting it not only into a transit space but also into something more, in such a way that with a few simple shelves that stretch the full length of the corridor and with a few low units of the same length the corridor space has been transformed into an ample library and a place for storage.

A few Ikea tabletop lamps hanging upside-down from the ceiling contribute to giving the space a surrealist touch while providing a very pleasant specific light. 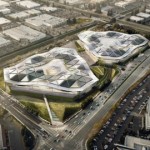 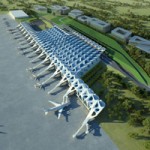