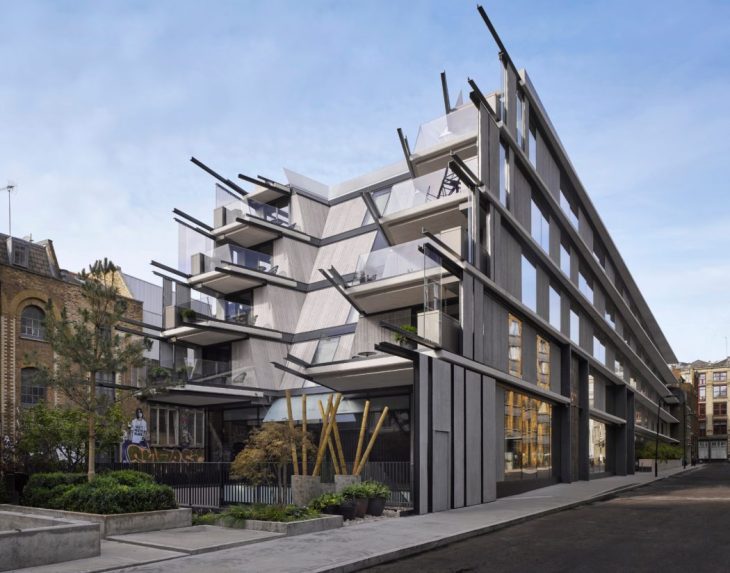 Ben Adams Architects and Studio Mica and Studio designed this inspiring contemporary hotel located in London, United Kingdom. We wrote about the project for the first time in 2014, once the design was announced.

The eye-catching Nobu Hotel Shoreditch project was completed earlier in 2017, take a look at the complete story below. 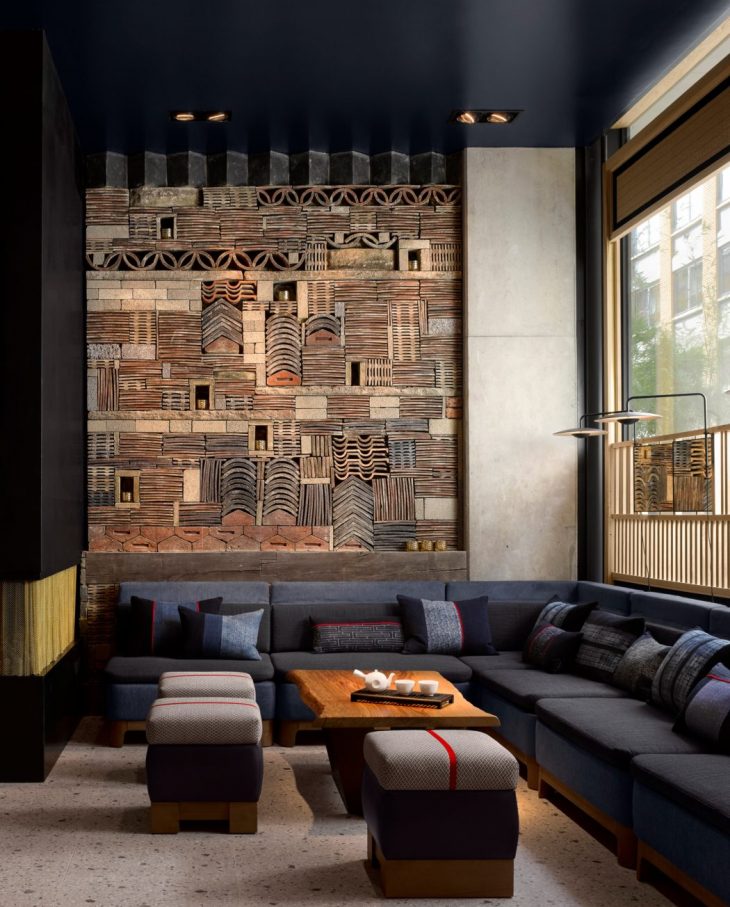 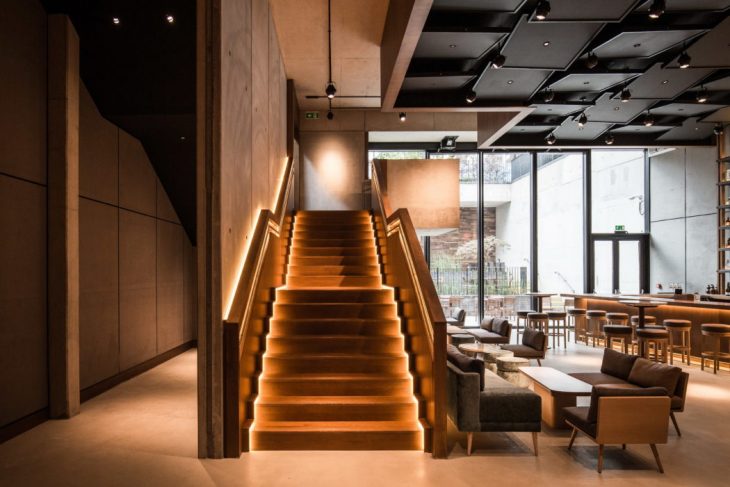 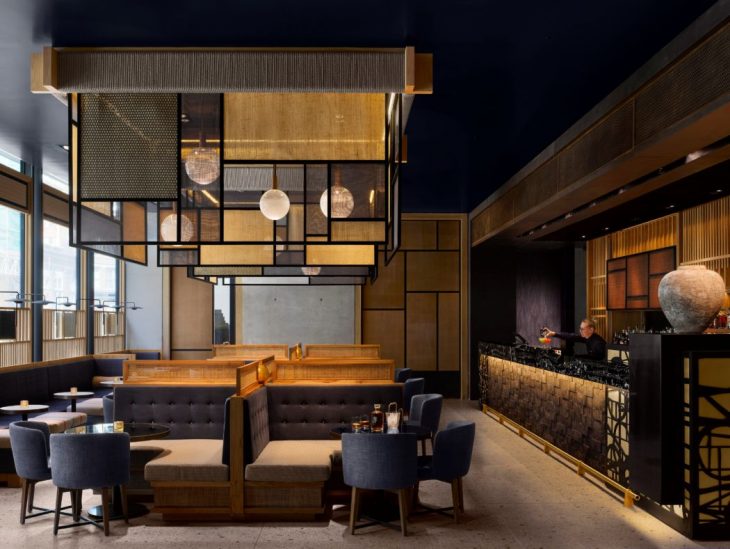 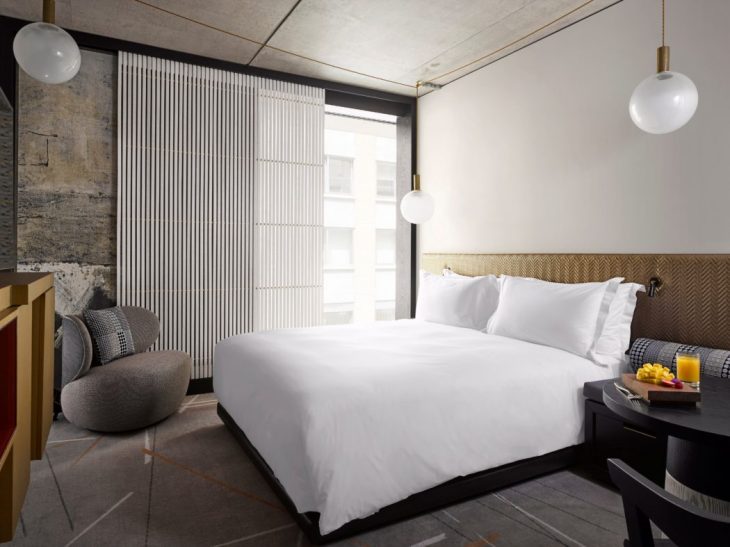 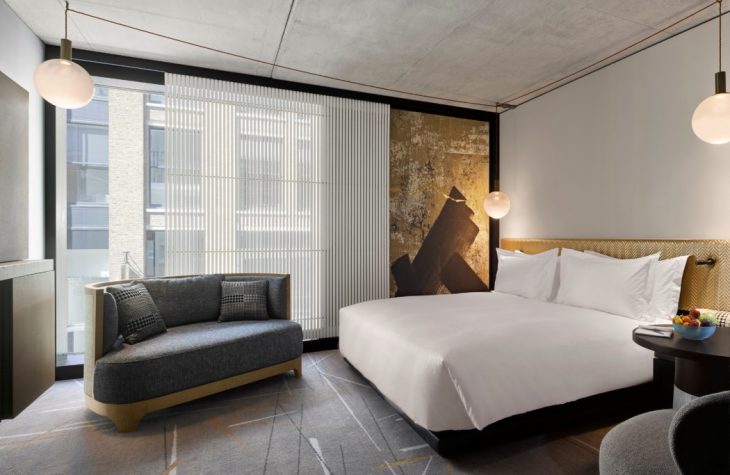 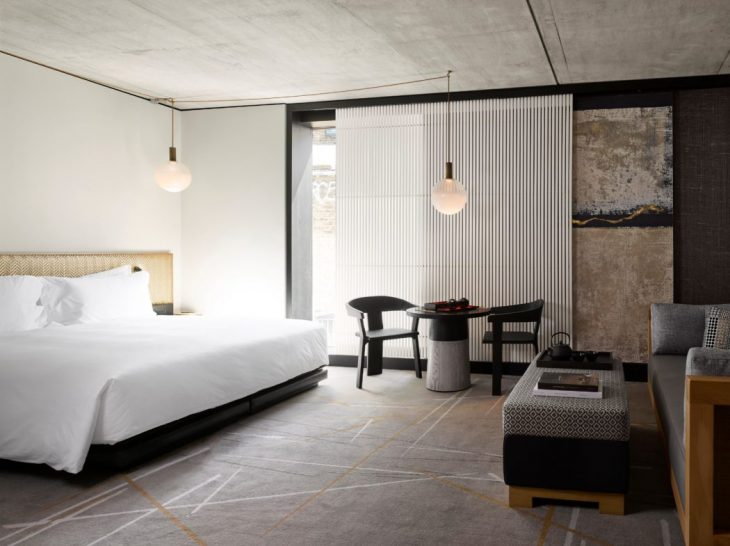 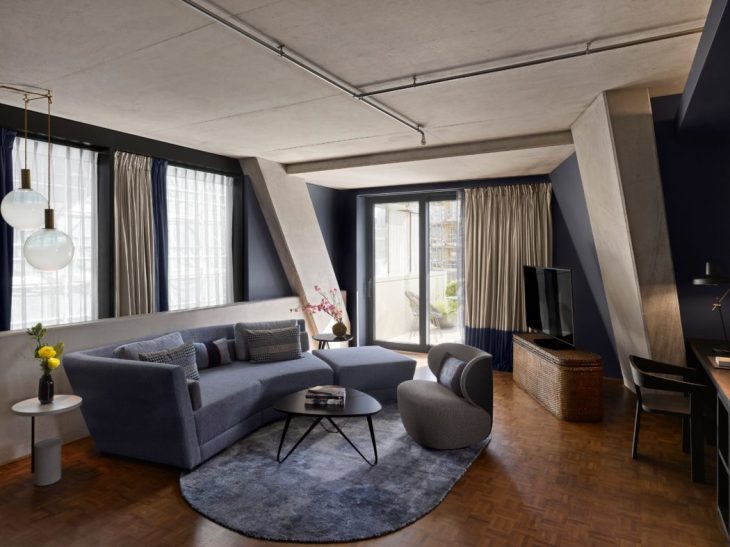 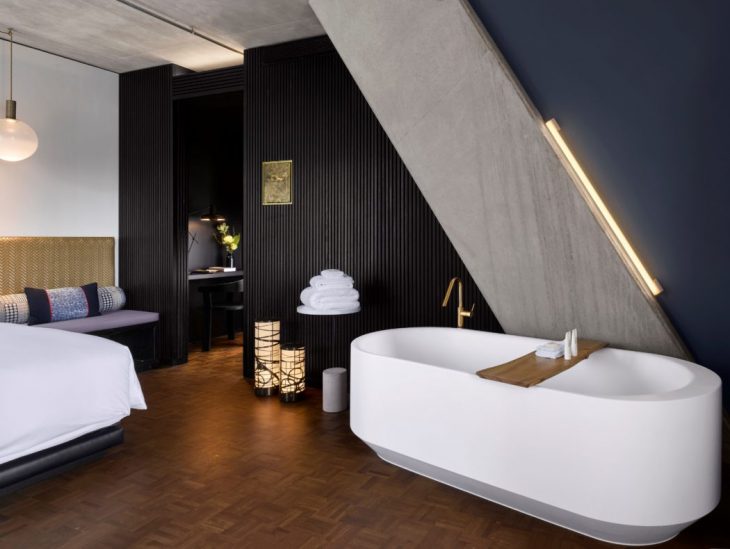 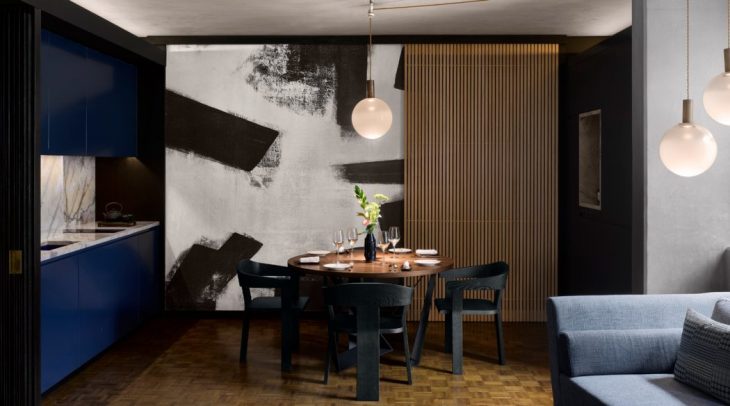 Behind a striking concrete and steel façade on a quiet street just off East London’s bustling Great Eastern Street, one of Design Hotels’™ newest members, Nobu Hotel Shoreditch, emerges as a tangible celebration of the city’s multiculturalism while solidifying its status as a world culinary capital. As an extension of the Nobu Hospitality group, founded by renowned chef Nobu Matsuhisa, actor and director Robert De Niro, and Hollywood producer Meir Teper, it comes as no surprise that the hotel’s culinary offerings take center stage. And yet the eponymous restaurant and bar is just one aspect of Nobu Hotel Shoreditch’s bold concept—which also incorporates a pocket garden; private dining and event spaces; a luxury spa and wellness center; and 148 rooms and suites featuring custom-made yukata robes and traditional Japanese tea sets.

A lesson in textural interplay

Standing as a stunning juxtaposition to the red-brick buildings and warehouses that define the Shoreditch aesthetic, the hotel’s structure is a contemporary tapestry of glass, concrete, timber, and bronze, flanked by cantilevered steel beams pointing east in homage to the hotel’s Asian roots. And it is this marrying of the neighborhood’s industrial identity with a distinct Japanese narrative that also characterizes the interior design of the property. A lesson in textural interplay, traditional patchwork and Asian design pieces contrast with polished gray concrete, patinated metal, and dark stone. A deconstructed geometric pattern based on sumi-e—an ink painting technique central to East Asian art and philosophy—appears throughout the hotel, while white minimalist bathrooms play host to statement brass ceramic basins. In guestrooms, a moving wall of artwork by local talent Sichi acts as a sliding window screen. Upon entering through the grand, double-height doors, guests are greeted by a soothing palette of grays, golds, and blues in the fireside Lobby Lounge and Bar, which serves small bites and handcrafted cocktails in an informal setting. A sweeping, back-lit staircase leads to the spectacular subterranean restaurant and bar— complete with a chef’s table, sushi counter, and an outdoor courtyard—where Chef Nobu’s iconic Japanese Peruvian cuisine pulls in star-studded crowds. As well as Nobu classics, the restaurant offers unique dishes inspired by the creativity and vibrancy of the local area, while the bar boasts an exquisite collection of Japanese whisky and sake.

For the ultimate urban escape, Nobu Hotel Shoreditch will debut its spa and wellness center in January 2018. The Nobu Spa will feature steam room facilities and three treatment rooms, offering a range of bespoke, luxury treatments in collaboration with the renowned Spanish skincare brand Natura Bissé. Signature treatments include Nobu Zen, which incorporates stretching and massage techniques to balance the body and harmonize the mind, as well as traditional Shiatsu rituals. For those looking for a more physically demanding wellness experience, the 24-hour fitness center offers state-of-the-art Artis by Technogym® equipment and personal training sessions.

Location Set in the heart of the pulse-quickening Shoreditch neighborhood, Nobu Hotel Shoreditch is surrounded by hip drinking dens, eclectic restaurants, and oh-so-cool concept stores and yet London’s financial district is just a stone’s throw away. 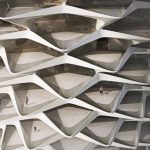