This house was developed having in mind the need to relate two domestic areas; one for a steady marriage couple and the other for their visiting three children with their own families. As well the house explains in to main areas, the first one is developed in a single line compound by the access, dinning room, kitchen, common areas and the master bedroom; understood as the “main house”. The second –that shouldn’t stay separate from the last one but keeping its own individuality-  its  developed as an expanding area, literally inserted in the main volume, used normally at weekends.

The house, though its size, works only in one line (axis) in the regular week and grows according to the guests on weekends.

A aesthetics of the previous, suggested from the use – or why not to say it, from the program – it was the idea of a longitudinal volumetry composed by a thin sheet inside whose(which) principal fold has inserted a luck of cluster that will be recognized both from the exterior and from the interior of the housing as an absolutely imported element.

The predominating materials are metallic structure and glass. 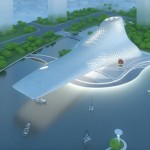 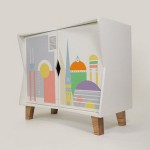