The film editing profession requires small, dark environments free from distraction and light reflection—in essence, hermetically sealed boxes.  Yet at the same time, a film editing company, if it is to be competitive, must exist in a stimulating, socially interactive workspace, alive to workers and clients alike—a place where people will want to be.

It was this challenge to transform the interior of a rough 1940’s 5,000 SF bow-truss warehouse into an entirely surprising and inventive space.  The location of the warehouse—in a featureless, industrial area of West Los Angeles—created few basic restrictions, yet the question of how to incorporate box-like rooms inside a large area while simultaneously creating an alive, interior atmosphere became a major challenge. To answer this question, the architect’s first decision was to treat the building’s warehouse exterior as a kind of horizon or envelope within which to locate a large interior public area, which would enclose the warehouse’s smaller rooms.  Incorporating the client’s program of offices, library, socializing zones, music rooms and editing rooms, the design uses independent forms as well as interior walls of unique materials, to create an entirely new and unexpected world of public and private space.  The dull West Los Angeles neighborhood surrounding the warehouse is at once replaced inside, through a variety of volumes and forms, all kept below ceiling height.  A constant flow of movement and circulation is created, heightening the interior’s excitement and tension. Opposite the café, the reception area grows out of the linoleum floor material, and is deliberately positioned away from the entrance door, so that the visitor must absorb the entire space. In the center of the space are two curvaceous volumes suspended over a shallow pool of water. Their overwhelming presence can be sensed throughout the space. With a skin of sleek gray lead, they resemble a pair of playing ocean mammals; their heavy bodies in mid-air, leaping from the pool, if not the building. The paradox of the inversion of heavy & light is reinforced as the mirror-like surface of the water below reproduces their image, especially when on occasion artificial steam from the pond sheathes the volumes in fog, making them appear to float. The curvaceous lead walls of the studios project a presence that can be sensed in every corner of the building, The white pixilated screens, which also function as windows for the studios, provide low-level naturally filtered light for the rooms’ interiors, as well as a kind of transition from the public to private spaces.  To create the windows’ light diffusion—required for the editors’ work inside the rooms—each glass wall was fabricated from quite ordinary materials: one is filled bottom-to-top with Ping-Pong balls, another with acrylic beads.  From a distance the materials glitter in a kind of fuzzy transparency; only up close do we realize the illusion has been created by common, everyday objects, turning the ordinary into the extraordinary. This same relationship between object and space can be seen at a larger scale throughout the project, where the residual or interstitial spaces between the objects and volumes in the warehouse become niches for informal encounters, waiting zones for clients or terraces on the water, all offering varied views from different vantage points.  Some of these waiting areas become informal areas to relax, even a café, where social activity is thrown into the limelight. The design attempts to create a series of balanced tensions – between isolation and interaction, movement and stasis, weight and weightlessness, light and dark, generating a complex spatial experience, turning an office space into an inspiring playground. 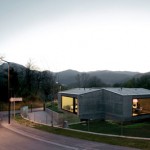 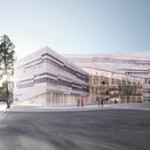