Interior designer Dana Shaked designed this innovative minimalist sales booth for a perfume shop. Take a look at the complete story after the jump.

From the designer: The design process for a booth at a shopping mall is fundamentally a different process from planning and designing a store or a restaurant in a mall. Stand design essentially combines an industrial design of a product, only on a large-scale model, incorporated with graphic design, branding, and interior design in reference to traffic flow, functional positioning of the products, and concept development.

The design process starts with intensive research of the products which will be sold on the stand, local environmental analysis as well as an in-depth study of the global and local competitive market. Work on the design of the stand begins with a thorough study of the products themselves that would be sold at the stand, specific environmental research on the location where the stand is to be established, as well as global and domestic market research – that is, who are the relevant competitors.

A perfume bar design begins with an important advantage – the fragrance. The pleasant smell is a way to engage people with the stand. With that said, most people’s sense of smell is a part of a larger plan. And so, the concept of a perfume bar design should be bold, striking and unusual, that would immediately conquer the heart of the buyer who is in a hurry. This presumes stand was planned to look like an alcoholic beverages bar. The small bottles of perfumes replaced large bottles which were installed hanging upside down on a unique rack made to size.

The rack allows the customer to pore the perfume to smaller bottle, which provides an instant, independent and pleasant engagement. In addition to the silver installments holding the bottles, the bar itself has been designed in accordance with a graphic language developed in advance. The logo has contains white fonts with two thin stripes positioned at the top and bottom, and a black square background. In accordance, the stand has been designed as units of squares which are black on the outside and white on the inside.

Each square is made of a sandwich like wood and topped with shiny black Formica. An illuminated large bottle of perfume was placed within each square. To illuminate the bottle in a prestigious and correct way, the back of the cabin has been planned like a light-box, which is made of a milky Perspex with LED lighting fixture hidden in its scope. In order for the stand to be able to adapt to different locations in various malls and even be assembled in small events or exhibitions, it should be designed in a modular fashion in such a way that you can remove or add more squares and display-cells (building blocks?), depending on the area allocated.

The cells are also functioning as a storage unit covered by shiny black Formica. A branded PVC floor, of the same size as the Pendel doors in the stand entrance, was installed between all cells. A waiting area and seating is planned on the opposite ream from the doors, alongside a packaging area and a cashier desk. Choosing monochromatic hues makes for a spectacular contrast between the colorful and pattern richness of the mall, and the stand which is characterized by clean lines and repetitive modules. 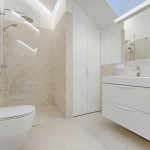 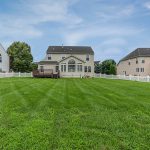