We have already written about the SPD Bank building in Suzhou which is located at the crossing of Zhongyuan Road and the River in Suzhou Induatrial Park and monitored by FTA Architects. Now, the project is completely finished. The SPD Bank building in Suzhou is located at the crossing of Zhongyuan Road and the River in Suzhou Induatrial Park.

The building is composed of a three story high podium building and a 15 story high tower in the form of a board.
With its long elevations the tower faces Zhongyuan Street in the South and the garden in the West. Its short elevations face the East and the river in the West.
The main entrance is on the South side, the employee’s entrance on the West side and the garage entrance on the North side.
In front of the podium building there is a two story high colonnade that defines a transition between the building and the public street. The 3 story high podium building contains all the public functions, as the bank hall, consulting areas, meeting rooms and VIP area.
The tower contains bank offices organized in single rooms, group rooms and open office space.
On top of the tower one floor is used for the management offices and reception rooms.
The core of the tower is place in the middle of the tower with panorama elevators and winter gardens facing the West, offering a spectacular view to the river. All elevations of the building are designed as a curtain wall elevation with dark glasses and dark grey aluminum frames.
This creates a simple, elegant and international appearance.
The SPD Bank and the Ningbo Bank are situated next to each other. Even so their functions are the same, according to both clients’ wishes, their outside appearance is different. 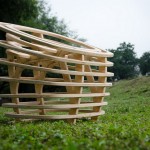 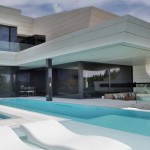