Atelier Archiplein recently completed their latest project in Plan-les-Ouates, Switzerland – The Solid Stone. The project consists of 2 mixed use buildings containiny 68 units of rental and first-time buyer social housing. The purpose of this project is to show that solid stone construction is both practical and affordable in the Swiss setting.Take a look at the complete story after the jump.

From the architects: Standing at the edge of the agricultural belt surrounding Geneva, these two buildings take full advantage of a privileged location offering broad view overlooking fields, vegetable gardens and further, Salève mountain. Promoted by the municipality of Plan-les-Ouates, this project, chosen through a competition, consists of the construction of 68 units of rental and first-time buyer social housing.

The aim of this project is to demonstrate the economic and constructive feasibility of building in solid stone in the Swiss context. Based on the strength of concept, the project is expressed in a simple and rational architectural language with a plan comprised of three successive rings. Entirely built with solid blocks of stone, these buildings have no concrete loadbearing elements. In both the common areas and the flats, the loadbearing rings are left in a raw state. The sone-setting of the walls composed of four 190×80 cm blocks imposes the format, suggests the intention behind the implementation, reveals traces of the saw and especially, exposes the different ancient forces of which it is comprised. Building with natural materials is the opportunity for Archiplein to test the current mode of building production against the yardstick of environmental and climate issues.

The understated façades present ornamental elements that reflect technical necessities, such as, for example, the cornice that repels rainwater well away from the façades and underscores by the shadow it casts the floors and the hollowing out treatment of the façade by means of an inward-facing corner. During showings, visitors are often observed running their fingers across one of the 10,000 blocks of stone or remarking with amazement the cool ness of the façades despite high exterior temperatures. 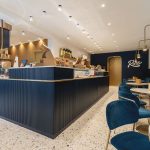 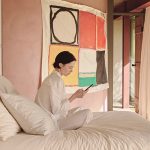