Located at the confluence of the Yangtze and Jialing rivers, the site for this mixed-use project is imbued with a significance that is immediately symbolic. The foremost of Chongqing’s traditional city gates (the Chaotian Gate), where officials received imperial decrees from the emperors, it has long been a historical landmark. As the city’s initial dock area on the Yangtze, it also represents the great tradition of the shipping highway, which has stoked this major inland city’s development and now drives its evolution as one of China’s most important modern cities. The design for the project to be situated at this gateway is generated by the image of powerful sails upon the water. The outer facades of the project’s six towers—the transparent surfaces that will face the water to the north—are meant to recall a fleet of ancient Chinese ships, with their huge rectangles of white canvas filled by the wind.  This image is recognizable in its simplicity, yet iconic in its form.

In addition to serving as an outward-facing gateway symbol, the project also has a strong presence in forming the apex of the city’s peninsula. The south-facing facades—the inside of the arc of towers—look back to the city in a gently embracing way, covered by green hanging gardens that meet the ground at a podium roof level that is itself a green amphitheater “park” of gardens, pools, and public circulation.  This park area gently rises to the north, framing views to the water between the towers—which will house residences, offices, and a hotel—and maximizing views of the project itself from the city. Underneath the park level, the podium consists of five levels of public program, including retail and cultural facilities, as well as hubs for land and water transportation.

The two central outer towers, directly facing the rivers’ convergence to the north, are the project’s tallest structures (348 meters above flood plain), with the central axis of the project proceeding back from between them, toward the city.  Tucked immediately within the two tallest towers, extending the arc, are four shorter towers, across which runs an exterior, connecting bridge that hovers 248 meters in the air.  In addition to linking these four towers—two of which are office space (and actually “twin” stepped segments of the two larger, central towers), and two of which are residential—the garden bridge echoes the amphitheater park far below and creates a dramatic viewing platform that optimizes this site’s unique views back to the rest of Chongqing. Within the bridge level’s hull is a full floor of hotel lobby, restaurants, and clubs. Above are gardens and pools. The remaining two (freestanding) towers, which complete the prow-like arc of six, are residential, making for a project total of 302,000 square meters of prime living units. 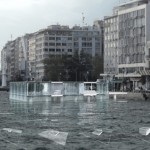 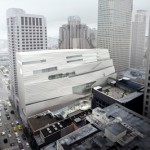