SFMOMA announced that SFMOMA`s architect selection commitee recommended Snøhetta to be their partners in developing an expansion that enhances the museum`s services to the community and its educational, social and economic role in the city.

"Snøhetta`s ability to create original cultural buildings that deliver great art experiences makes them a perfect partner for SFMOMA as we work toward our goal for new", says Charles Schwab, chairman of the museum`s board of trustees.

"SFMOMA`s extension is the natural next step in its evolution, from the museum`s origins in a shared building in San FRancisco`s Civic Center, to its distinctive Mario Botta- designed structure on Third Street!" says Snøhetts`s co-principal Craig Dykers. "The new extension will unite the Botta design with its dynamic urban surroundings, becoming the tissue that merges building and community, supports the museum`s role as an educational and civic catalyst, and opens up the museum to the diverse audiences it serves". Developed by Snøhetta in collaboration with SFMOMA and EHDD of San Francisco, the over 225,000- square-foot expansion will run contigously along the back of the current building and extend from Howard to Minna streets. allowing for the seamless integration of the two structures. The new building will provide SFMOMA greater public profile and an openess that will welcome visitors and project the museum`s role as a catalyst for new ideas, a center for learning, and a place that provides great experience for Bay Area residents and visitors.

On the east side, the building will feature a sweeping facade and an entrance in an area that is currently hidden from public view and largely unused.

This will be achieved through the creation of a mid-block, open air, 18-foot-wide pedestrian promenade running from Howard Street through to Natoma Street. The public promenade will feature a series of stairs and landing terracing up to an entry court that extends from the new east entrance, providing additional public space.

The building also introduces a facade on Howard Street that will feature a large, street-level gallery enclosed in glass on three sides, providing views of both the art in the galleries and the new public spaces.

The building will rise fifty feet higher that the Botta building, and its roofline will be sculpted to frame the skyline of the buildings beyond it to the east when viewed from Yerba Buena Gardens.

The planning of the expansion continues as an intensive collaborative process of museum leadership, trustees, visitors, other stakeholders and the design team. The design of the interior spaces and integration of the two buildings will be unveiled at the end of this year. 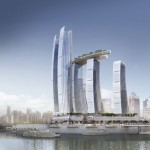 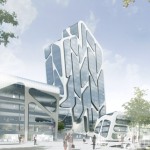