Brusnika Design, in collaboration with Dutch teams ANA Architecten and KCAP Architects & Planners, have completed Southern Quarters, a large-scale renovation project in Yekaterinburg, Russia. The new quarter is divided into four parts, each with its distinctive character: three residential zones and an educational cluster to the north featuring a kindergarten and a school complete with sports grounds. The sports facilities are available to the public outside school hours for working out, jogging or walking. Discover more after the jump.

From the architects: Southern Quarters is a large-scale renovation project in Yekaterinburg, Russia. Some of the wooden houses on the site were derelict or in the state of disrepair. Urban sprawl, proximity to the city centre and transport networks necessitated designing new, denser and more varied accommodation in the area. Brusnika launched the plot redevelopment project in 2018.

The project master planning was accomplished by the international KCAP Architects & Planners. A triangular shape of the plot, with no street grid or building lines were the main challenges to be addressed. With a view to creating quality environment, the KCAP team opted for houses with alternating heights and an integrated system of public spaces comprising all essential residential amenities.

The new quarter is divided into four parts, each with its distinctive character: three . residential zones and an educational cluster to the north featuring a kindergarten and a school complete with sports grounds. The sports facilities are available to the public outside school hours for working out, jogging or walking.

The residential zones change in character depending on their location relative to the existing motorways. Houses with alternating heights, ranging from 7 to 17 storeys open onto the motorways. They form the frontage of the quarter facing the city with their vibrant lower floors hosting shops and cafes. At the same time, all the buildings are closed at the perimeter to form residential clusters with quiet courtyards. 25-storey tower blocks with the city centre view are sited in a row along the eastern border stretching from the motorway to the centre of the quarter. Lower-rise, one entrance 7 to 9-storey urban villas hedged in by greenery and trees are located inside the quarter.

A new grid of streets with pedestrian zones and driveways links the renovated plot to its immediate surroundings. The area is neighbouring a city park, a courthouse, a hospital and a bus station.

A green walking route featuring a variety of activity zones with three squares and a shopping precinct traverses the whole district. The northern and southern squares mark the borders of the new quarter and the points of intersection with major streets of Yekaterinburg.

They link public transport stops, pedestrian routes, the quarter amenities and the Southern Quarters walking zone accessible to the public. The walking route merges into the city park and extends the city’s green space.

According to the master plan, the facades design is conceived to create controlled diversity within a uniform built-up area. The traditional orthogonal window grid is combined with a shifted arrangement and checkerboard pattern. Several facade designs are used in one block to heighten the similarity of variously sized sections and avoid monotony.

One of the principles in facade design is to highlight business and amenity zones, which is achieved by shifting the lower floors from the main facade line. The entrance is protected by an overhang, ensuring a comfortable passageway along the retail zone.

The retail area is additionally marked with a different type of finish, linking together different blocks and creating a frame for an integrated shopping route. By the same token, the facades accentuate inner-block pathways. For instance, the light hues of the buildings’ frontages, facing the pedestrian precinct, outline the public space network.

Working with variously sized buildings, a special emphasis is placed on the roofs – they are constructed as the fifth facade visible from high-rise blocks. Some roofs will feature plants, and some will become terraces for top floors.

The master plan underlies the design of individual buildings, which was assigned to several architectural bureaus. One of the blocks was engineered by the Dutch DROM bureau and the second one — by Dutch ANA Architecten. Both projects have reached the phase of completion.

The third block designed by Brusnika’s workshop is being constructed in collaboration with DOM.RF, a financial corporation to promote development in the housing sector of Russia. The apartments of the latter will be sold and leased out. Brusnika is planning to complete the entire project by 2035. 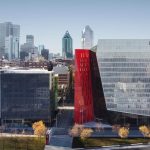 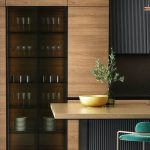