Award-winning Israeli architecture firm Kimmel Eshkolot has been chosen to serve as the main architect for the upcoming Albania Jewish Museum in Vlorë, a distinguished museum that will serve as a symbol of the history of the Jewish community in Albania. The museum pays respect to the history, present, and future of the Albanian Jewish community while embodying the future of sustainability in architecture and design by maintaining significant portions of a historic structure, including a piece of its pitched roof.

The Albania Jewish Museum is being planned to function as a cultural hub within the setting of a historic building. The museum will chronicle the development of the Jewish population in Albania from the early Roman period to the present while placing special emphasis on the experience of Jews in Albania during World War II. Through the design of numerous distinctive spaces, ranging from adaptable display rooms to public areas, the museum will stimulate its urban context and support the civic growth of the city.

We talked to Etan Kimmel, founder of Kimmel-Eshkolot Architects, about the inspiration behind the project, sustainability features and balance between history and future.

What was your main inspiration behind the project?

Our inspiration came from the search of how to combine old and new — and make a building to be as remarkable as the story it tells. The Albanian Jewish Museum is a place that tells the story of the very special history of the country’s Jewish community. The museum will be located in the old city of Vlorë – partly inside a historical monument and partly in a new wing added to it. Our challenge was to create a new cultural hub by finding the right balance between the new additions to the existing surrounding and to find the right way to position the volumes in relation to the larger urban environment.

The first and most important decision is to use an existing building for the museum — a project of adaptive reuse. As embedded in all of our projects, the AJM is designed in a way that will carefully relate to its position regarding climate considerations and sun directions. Since in this part of Albania the summer months are long and hot, the entry pavilion acts as a space that protects from the harsh elements. It includes a rock that allows very limited sun penetration and a mass of concrete and stone that will create a natural cooling effect to the interior spaces of the pavilion. A major part of the museum will be underground with its advantages in energy use. The elevations of the new addition to the old building will be protected from the sun by unique glass panels with metal meshes inserted in between the layers of glass with the south elevation being totally protected from the sun.

What aspects of local culture were used as inspiration while working on the project?

We found the rich lively neighborhood of Vlorë’s old city center to be the perfect location for this project. We created an open “Besa” room between the built parts of the museum as a focal point. A room that gives shelter, hospitality and protection according to the Albanian Besa code, which led to the heroic story of saving the Jewish population during WWII.

Is the interior of the museum intended to accommodate many people, or is it to be more intimate?

We expect visitors from near and far to come and visit the museum because of the very special story it tells. But the museum is also intended to serve the local community with educational functions, events space and a temporary exhibition space.

Open spaces seem to play a huge role in the project. Could you tell us more about it?

By placing the sculptured stone entry pavilion in a distance from the old building connecting them by a glass bridge, we manifested an intimate, protected open space that will be created to host outdoor activities.

For projects of importance such as the Albania Jewish museum how do you achieve a balance between history and future?

The museum aims at two contradicting objectives at once – to be seamlessly embedded within its surroundings while being an iconic architectural object. It aims to respect history and tell its story while looking at a future of trust between all religions. We tried to reach the right balance between the historic building, the new glass box edition, and the new entry pavilion to become one iconic composition. Thanks to the support and initiation of the competition by the Albanian American Development Foundation, we are in the process of creating what will be an important civic and cultural space for the city and an important destination for the world’s Jewish community.

The construction of the innovative cultural space is expected to start in Q4 2022, with delivery scheduled for 2025. 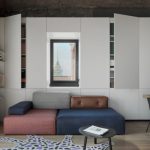 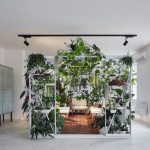