Massimiliano & Doriana Fuksas architects in collaboration with SPEECH have won the first prize in the international competition for the design of 'Moscow Polytechnic Museum and Education Centre' which should be realized by 2017. For a closer look of the winning project continue after the jump: Massimiliano and Doriana Fuksas + Speech, at march 2013, have won the international competition for the design of the ''Moscow Polytechnic Museum and Educational Centre'' in Moscow which should be realized by 2017.

The project is composed of four elements that make up a sculpture of irregular geometry, as cut by the wind, entirely covered by copper pre-oxidized that sends back streaks of green and blue. The elements are connected to each other through the internal levels. They develop across and lay on a transparent case that looks at the city.

The Museum and Educational Centre include: a cafe, a shop, two auditoriums of different sizes (between 500 and 800 seats) designed as parallelepiped made of red wood and three winter gardens with a sliding roof, several conference / auditorium rooms, the Science and Technology Center with support services, exhibition halls, science / art gallery, exhibition area of ??the Museum's collection, exhibition Maths, cinema / auditorium, several laboratories, a library, a workshop, the exhibition area of ??the Science and Technology Museum Center. 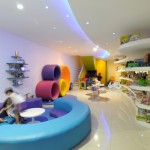