Arrillaga Parola Arquitectos have designed the offices for the new branch of the Association of Argentine Cooperatives in the city of Bahía Blanca, Province of Buenos Aires, Argentina. Take a look at the complete story after the jump.

From the architects: The project for the new branch of the Association of Argentine Cooperatives in the city of Bahía Blanca, Province of Buenos Aires, is located on the corner of H. Yrigoyen and Pirovano streets in the Aldea Romana neighborhood.

This location is strategic since it is located on Av. Cabrera, one of the main access and commercial axes of the city. It is an area in constant growth, which will allow the Association of Argentine Cooperatives to spread its actions at a local and regional level and, at the same time, generate with this building a new urban landmark linked to the notions of production, cooperativism, innovation and sustainability.

The very choice of the terrain to intervene reveals ACA’s vocation to make its actions visible, and its commitment to openness to the environment where it is inserted. The initiative to build a new institutional headquarters of its own speaks clearly of the social commitment and desire to integrate the Association into the community.

From its morphological expression, the project tries to manifest values that ACA promotes in its actions: The public scale of the complex and its degree of openness towards the environment respond to the social responsibility that ACA maintains as a company. The building is presented as a “transparent” object that exposes its interior activity, promoting a dialogue with the community. The project also foresees the treatment of the surrounding exterior spaces and a public square open to the community, which speaks of the link that it will try to forge with the environment.

Its interior spatiality, marked by spatial fluidity and double open levels, generate wide and inclusive visuals, fostering a sense of equality, integration and equity. The work spaces are resolved in continuity and tending to unify the areas that, in the past, were understood as isolated or independent events. This project search speaks of the intention of transversality and mutual collaboration that is intended to be achieved.

The proposal arranges the different spaces of the program on the free perimeter of the building (4 facades), articulated to the interior by a large central void (patio) that notably improves the natural lighting and ventilation conditions of the building. This central void allows the interrelation between all the spaces to be appreciated from any angle, reinforcing the idea of a democratic space and equality.

For the rest, the typology is linked to the concept of “open floor plan”, nucleating the service spaces and vertical circulation against one side and freeing the rest of the floor plan from fixed structures. This solution allows to achieve a structure of high flexibility and versatility of the spaces, enabling growth and adaptation to change.

From the point of view of the materiality of the building, the repertoire of materials used suggests concepts such as modernity, innovation and efficiency. In general terms, the aesthetic commitment is to the honest manifestation of each one of the structural and constructive components. The glazed closures propose transparencies that allow the interior of the building and its operation to be recomposed from the street, resorting to a series of metal parasols to subtly hide the spaces that need some type of climate control or greater privacy.

The metal structure, drywall partitions and slabs, designed as a resource to simplify and speed up the construction process, define a set that is perceived as simple, austere and contemporary.

The project pursues principles of sustainability, accompanying the company’s vocation for social responsibility and efficiency ambition. In the first place, it favors well-ventilated spaces (cross ventilation) and with optimal natural lighting, generated from a series of interior patios that favor this aspect. Towards the perimeter, the glass closure is complemented by a series of parasols that allow controlling the direct incidence of the sun in unfavorable orientations.

The project program is developed in 4 (four) levels:

The project has a first underground level that houses a covered garage for 9 vehicles, together with a machine room and the circulatory core to access the other levels of the building.

On the ground floor are the spaces for public use with the highest influx of visitors. From the main entrance, located on the corner of the planting, the reception and information hall is approached and from there you can access the auditorium for 160 seated people (subdividable to operate in groups of fewer people) and a barbecue area – dining room for 70 people, both articulated by a central courtyard that organizes the layout and improves lighting and ventilation conditions.

Towards the bottom of the land, a large patio is arranged as the main expansion space and for the development of outdoor activities. This open space is accessed from inside the building, or through a secondary and service entrance from the side street. This large patio, in turn, is articulated with a public square on the adjoining land, functioning as an integral open area that improves the link between the building and its surroundings.

On the first floor, all the managerial and administrative tasks of the company are carried out: secretary, meeting rooms of different capacities, management, administrative space and dining room for employees. External public access to these areas, for more private use, is channeled through a second hall that has a balcony in the form of a bridge over the main hall, from which there is access to a reception area that controls and coordinates the influx of external people. The administrative spaces have expansions to an open terrace for recreation from where you can descend to the general patio. In this way, at each level, the interrelation between exterior, interior and intermediate spaces is promoted.

The roof on the 3rd level is free and open in this instance and a machine room and other technical equipment will be located there. 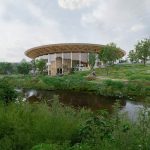