ASI! Arquitectura recently completed their latest project,  an oratory located in the city of Paraná, Entre Ríos – Argentina. The oratory’s design is an extension of the old temple’s front form, with a two-sloped roof, intended to signify the religious community’s expansion and presence in the neighborhood. To raise the size, prioritize the new access, and give it a more contemporary appearance, the roof’s two slopes are combined into one. Take a look at the complete story after the jump.

From the architects: The project is located in a very consolidated urban sector, on a busy street south of the city of Paraná.

Initially, the place was an undeveloped and depopulated area in which a small temple was erected, with a gabled roof and side tower. Then, as the years progressed, the city grew and so did its immediate surroundings. The initial temple became too small for the demand it had to satisfy, and therefore a larger building is built next to it for that purpose. In a third stage, a hall, classrooms and other facilities were built. Faced with such growth, the small initial temple started to house toilets for the whole complex, degrading its symbolism and history.

Faced with this, the implantation and shape of the San Peregrino Oratory seeks to vindicate and revalue the symbolism and original meaning. That is why it is positioned in the atrium of the first temple.

The form of the oratory is an extension towards the front of the form of the original temple with a roof of two slopes, which seeks to symbolize the growth and presence of the religious community in the neighborhood. The roof with two slopes is transformed into one, in order to increase the scale, prioritize the new access and give it a more contemporary image.

The original tower is recovered (the sector where the disabled toilet recently worked) and its height is raised, which seeks to allude to the spiritual growth of the community. Inside the oratory, this tower opens onto it by means of diagonal lintels, to increase the space for use and integrate the two spatial volumes.

The interior space seeks to be a pause within the convulsed rhythm of movements of the environment and of daily life, for which it was sought to recreate an atmosphere of calm and peace. A stripped-down area, where light is the main protagonist and those present find seclusion. It is resolved with a shell that completely envelops this space and leaves only a zenith slit for the entry of natural light, strategically positioned on the cross and symbolizing spiritual illumination. The sunlight was studied, ensuring that the entry of natural light was given the greatest amount of time, both in hours of the day and in months of the year.

In addition to the light, the rain also enters through this opening, thought of as inclement weather, which is always present on the pilgrim’s path and in front of what the spiritual space of the oratory provides containment.

The materiality tries to accompany that symbolism of protection that the oratory provides, through a rustic concrete envelope and a stone floor in the space of use, which try to symbolize a place of refuge for the pilgrim. The tower is materialized in plain white, contrasting with the above. 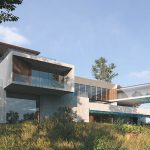 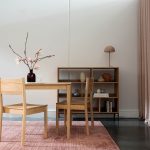