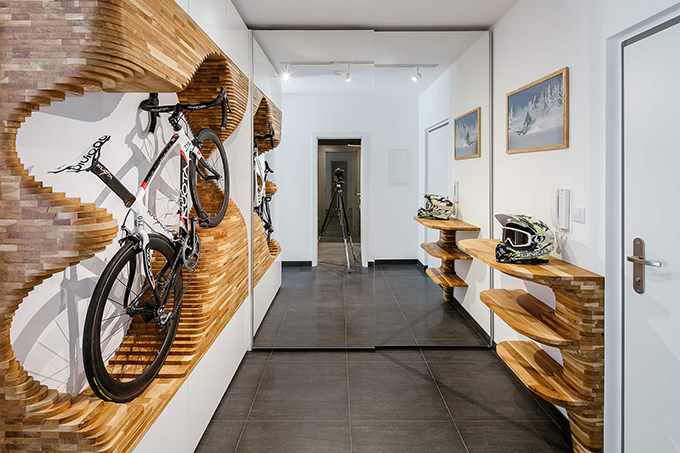 Archistroj design studio has recently completed the interior design project of an apartment in Prague. It is one of a few examples of parametric architecture in the Czech republic. The parametric interior of the apartment is optimized using algorithms based on the user’s lifestyle. The resulting design is particularly interpreted through organically shaped build-in furniture placed in a simple, open, minimalist apartment. This becomes a bright exhibition space through which the wooden interior elements are placed and thuscreating a layer of a certain interior landscape. Take a look at the complete story after the jump. 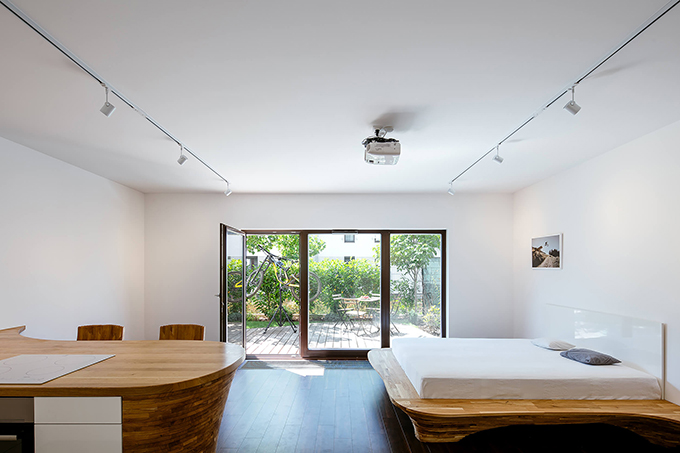 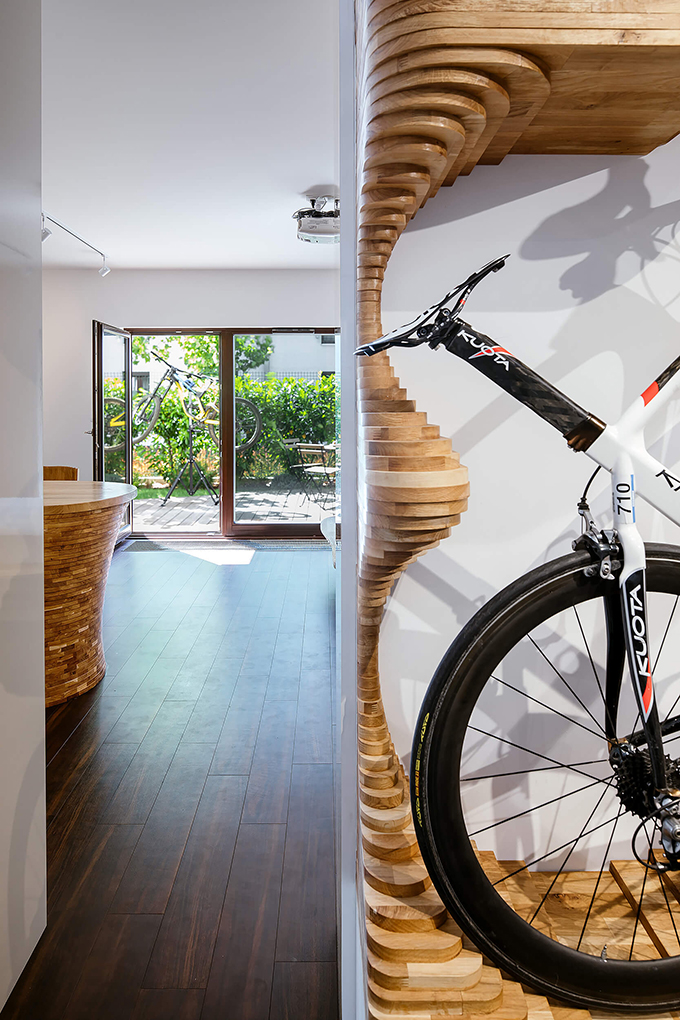 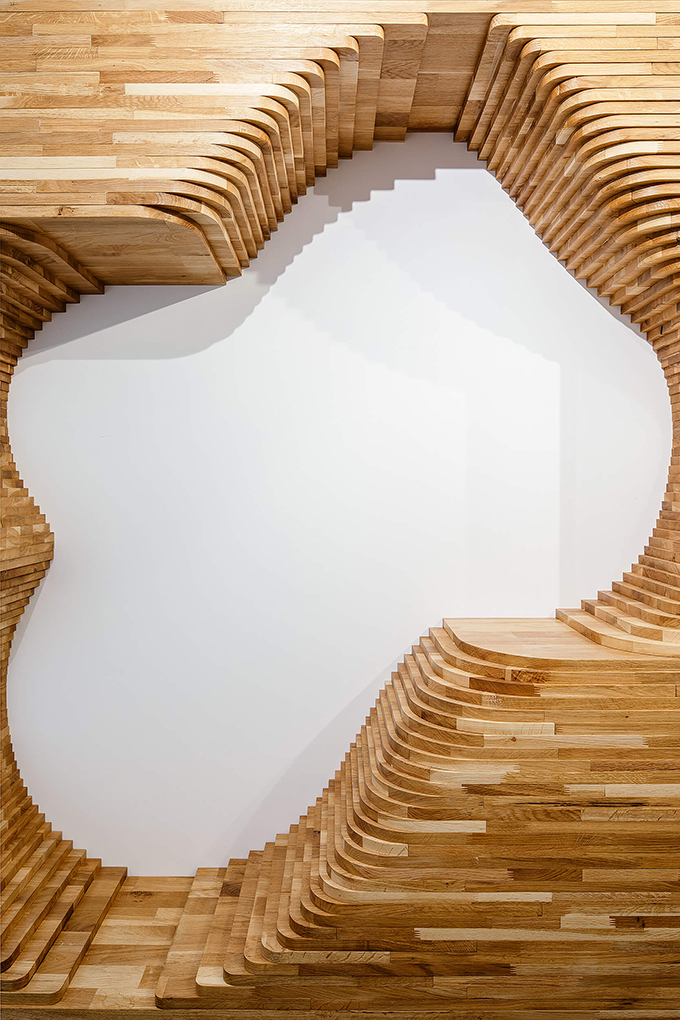 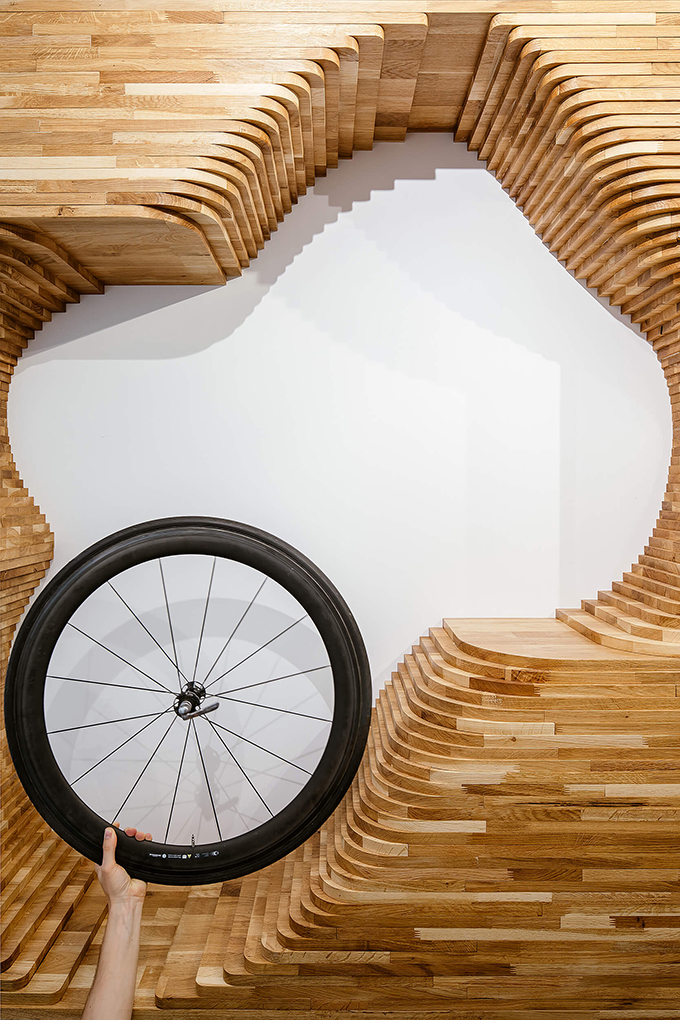 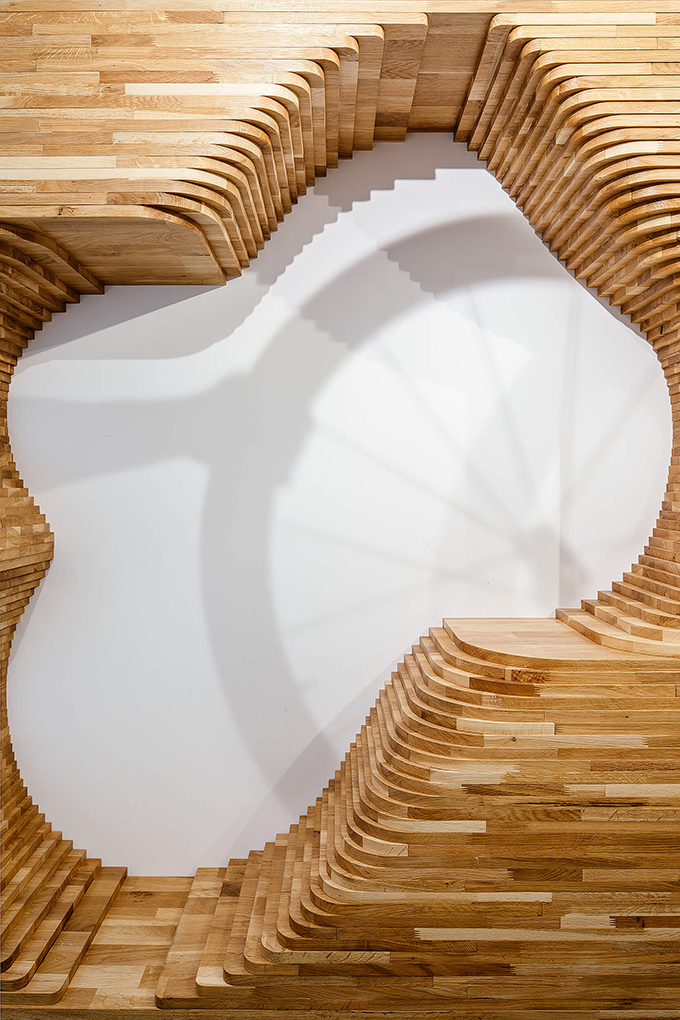 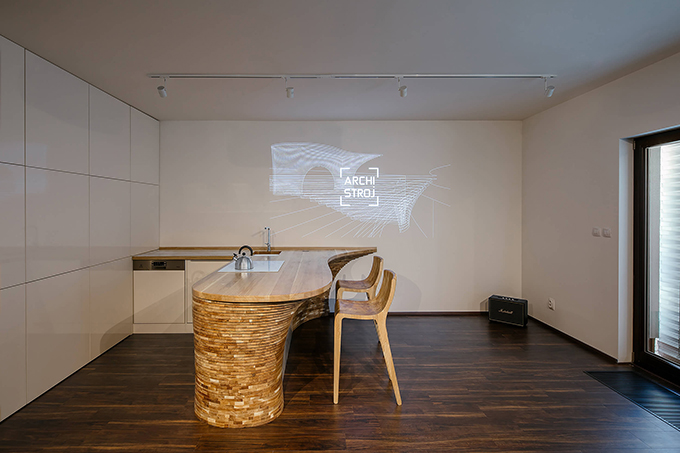 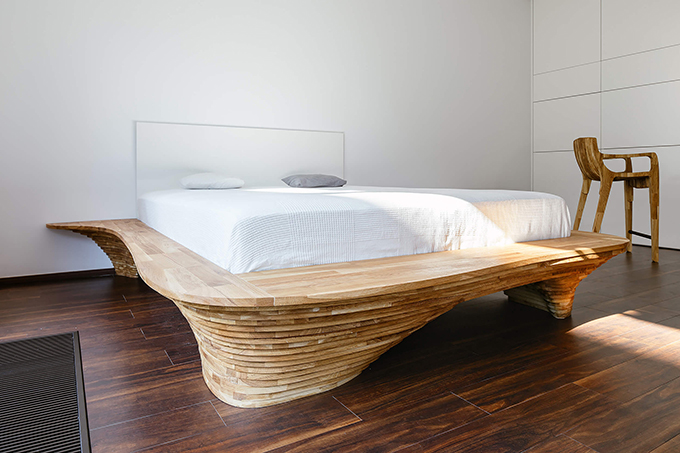 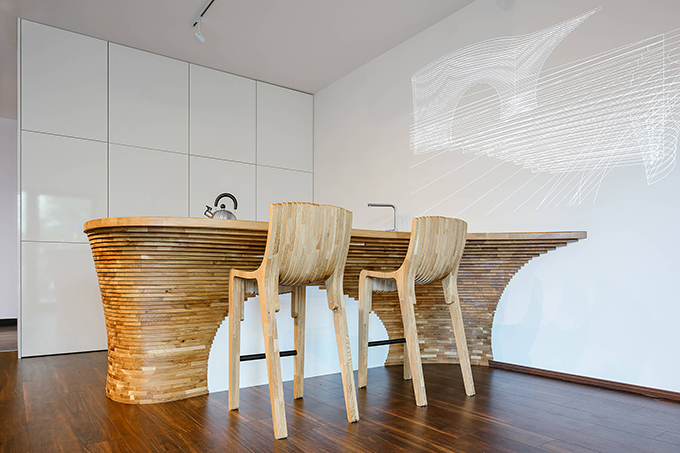 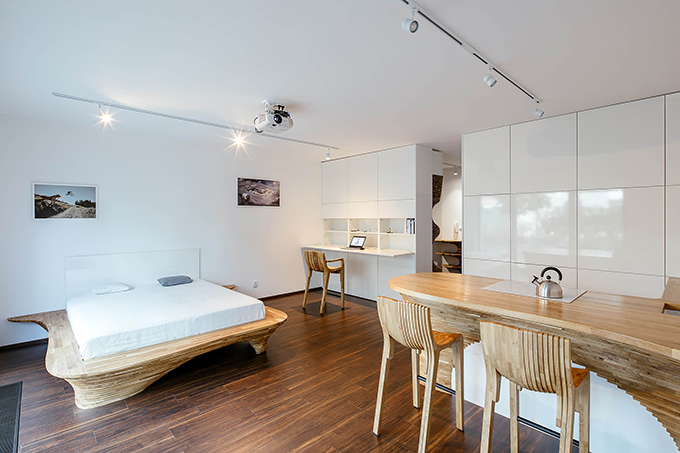 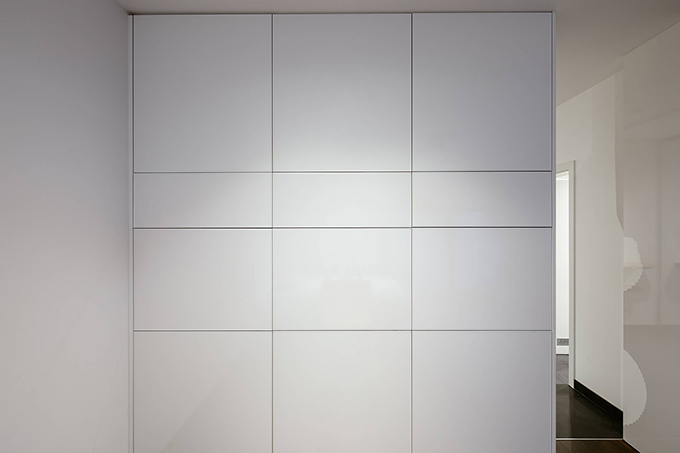 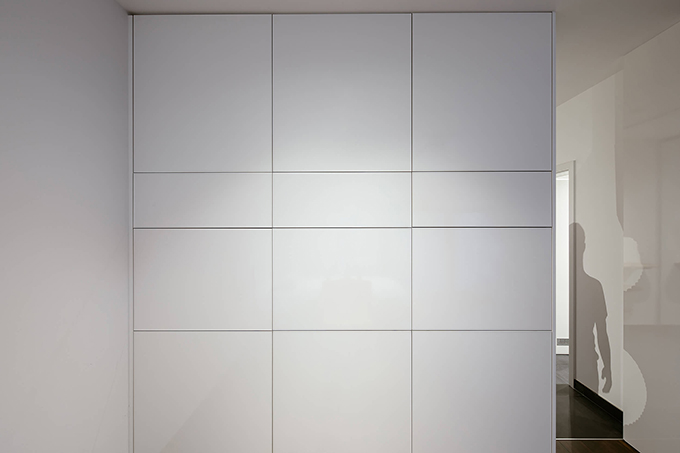 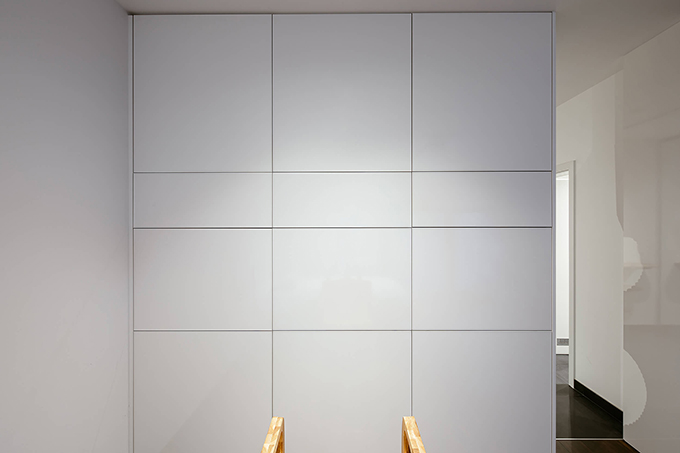 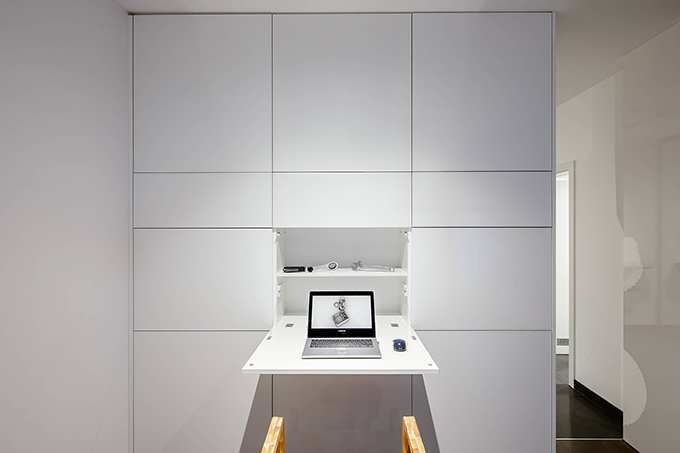 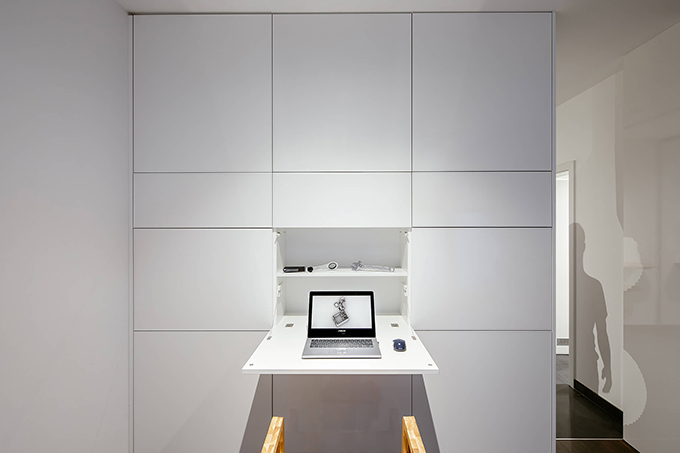 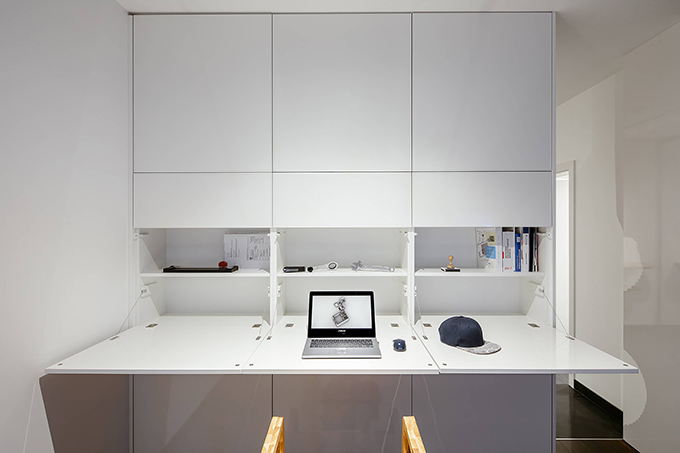 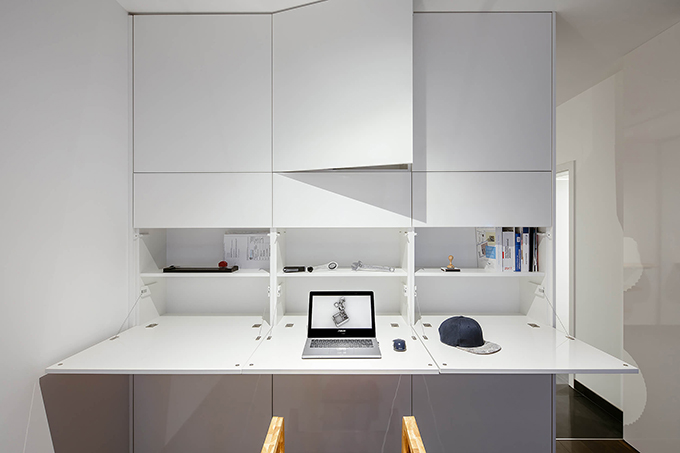 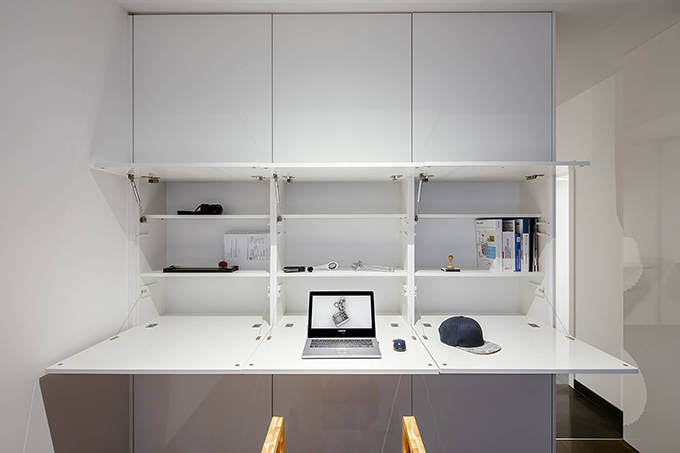 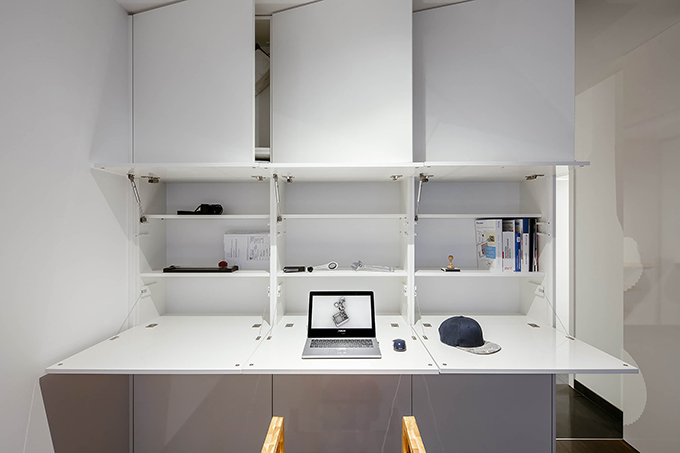 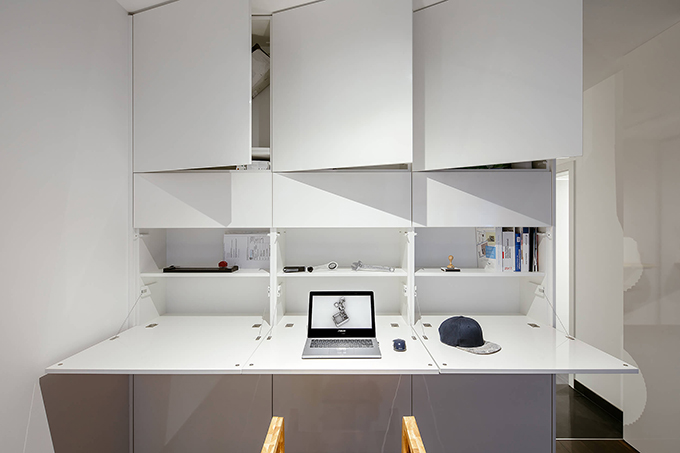 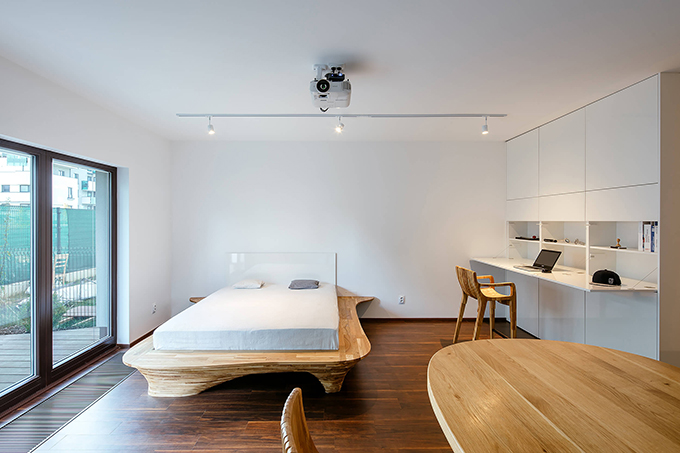 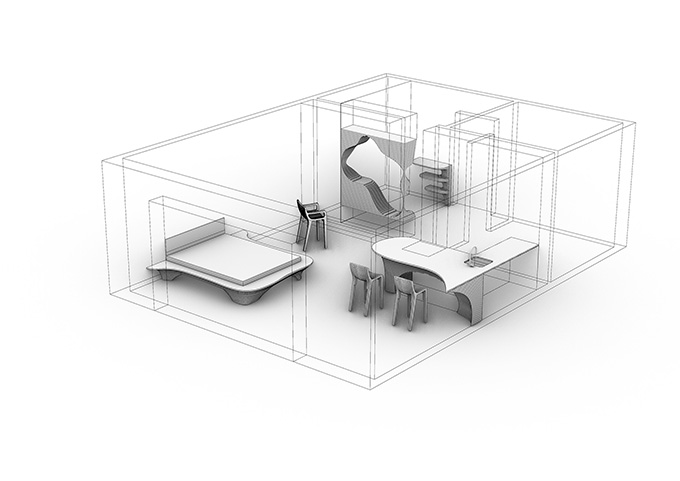 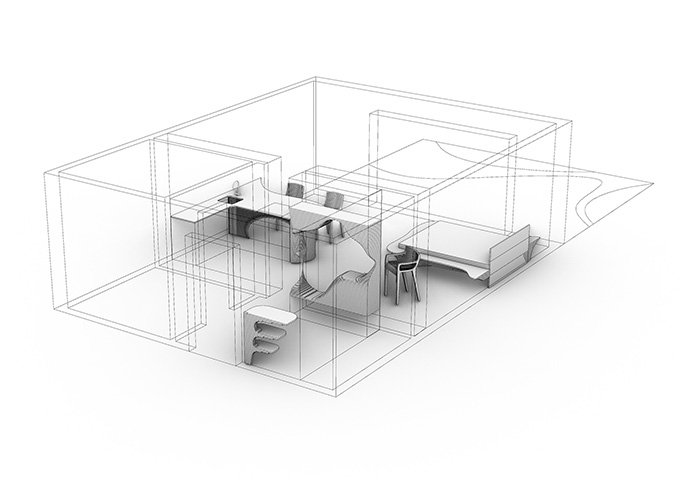 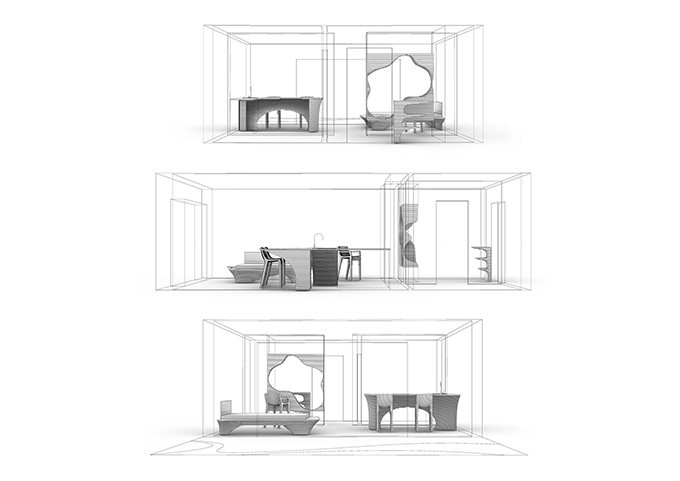 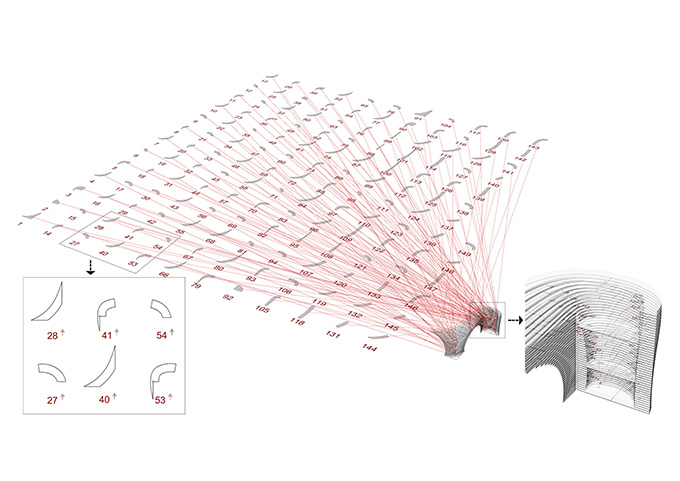 From the architects: A minimalist apartment on the outskirt of Prague with an area of 52 m2 with a garden area of 25 m2 reacts to the user’s active life in the wild nature and his interest in technologies. The unique design combines both. The main symbol is parametrically designed build-in furniture individualized and ergonomically shaped to the most user-friendly form. Algorithms have been developed together with the user to achieve the best possible design by using of digital fabrication. Detailed planning of each piece of wood and workflow has reduced the overall price because user easily assembled all the joinery elements by himself.

Despite the low floor area, the user requested the features to match the multi-room apartment. For this reason, some elements had to be designed as muc h as possible universal. The edge of the bed is shaped for sitting, which combines the functions of bedroom and living room. The bar is also a dining table and the built-in wardrobe can be converted into a desk. The universality of the elements was a key aspect for the well-being of living space. In the case of a entrance hall a part of the atypical structure is used to place as well as expose an important part of the client’s life – a racing bike.

The whole space of the apartment, or even service rooms and outdoor terrace are designed in a simple material and color combination, where the dominant white materials are complemented by oak joinery elements. The center of the space consists of white built-in cabinets, which are designed with an emphasis on simplicity and unobtrusiveness of the entire structure. The same principle of simplicity and lightness is then applied to the whole space, thereby ensuring emphasis on visually attractive parametric elements of the apartment. A kind of bright exhibition space, in which the wooden organic interior elements are displayed and in a way creating a layer of interior landscape. Other equipment such as gallery lights, mirror cabinets or white laminated kitchen are only complementary to this principle and enhance the focus on digitally designed layered constructions.

The interior is one of the very few examples of parametric design in the Czech Republic. This approach enabled to individualize the space exactly according to the wishes of the user, who could literally control the input parameters of algorithms that generated the resulting design. By the chosen method it was possible to create dozens of variations without time-consuming manual redrawing of plans.

The group Archistroj formed by trio: Pavel Paseka, Jan Petrš and Martin Žatečka was established at the Prague Faculty of Architecture, CTU, where it was strongly influenced by the Miloš Florián’s Studio FLO|W. During its existence it has been constantly evolving and moving from classical projects towards digital architecture and urbanism. Archistroj implements modern technologies and design based on parametric and evolutionary algorithms to its projects. Important part of the Archistroj is also research activities in areas such as evolutionary urbanism, adaptive planning and autonomous robotic architecture. 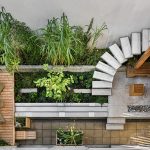 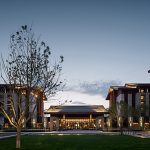