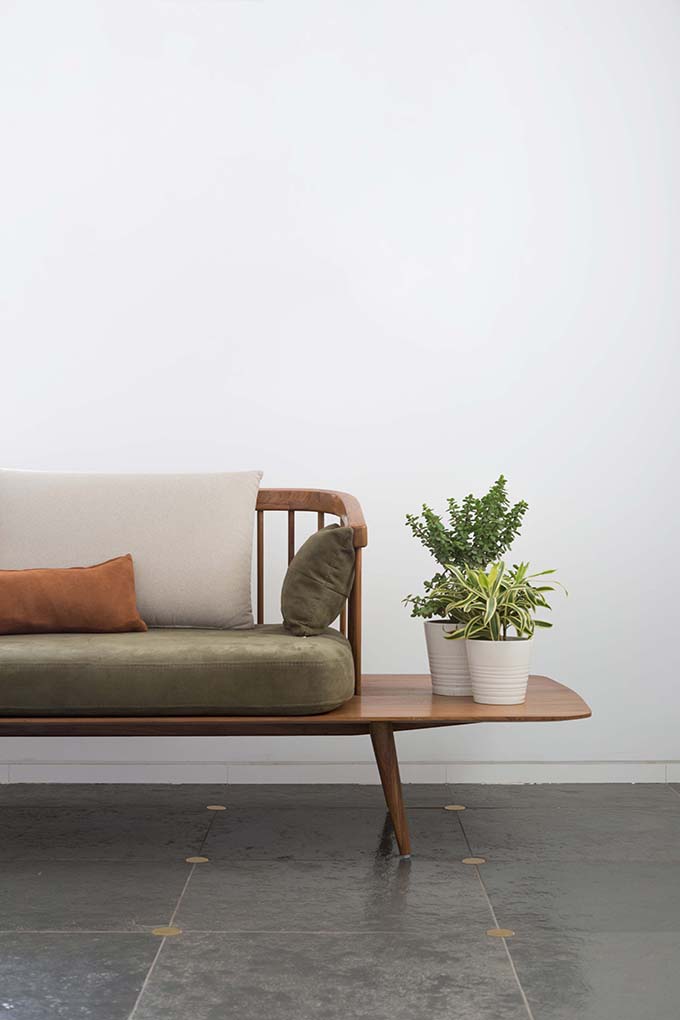 Design Experiment, designed this stunning apartment in Hyderabad, India. Take a look at the complete story after the jump. 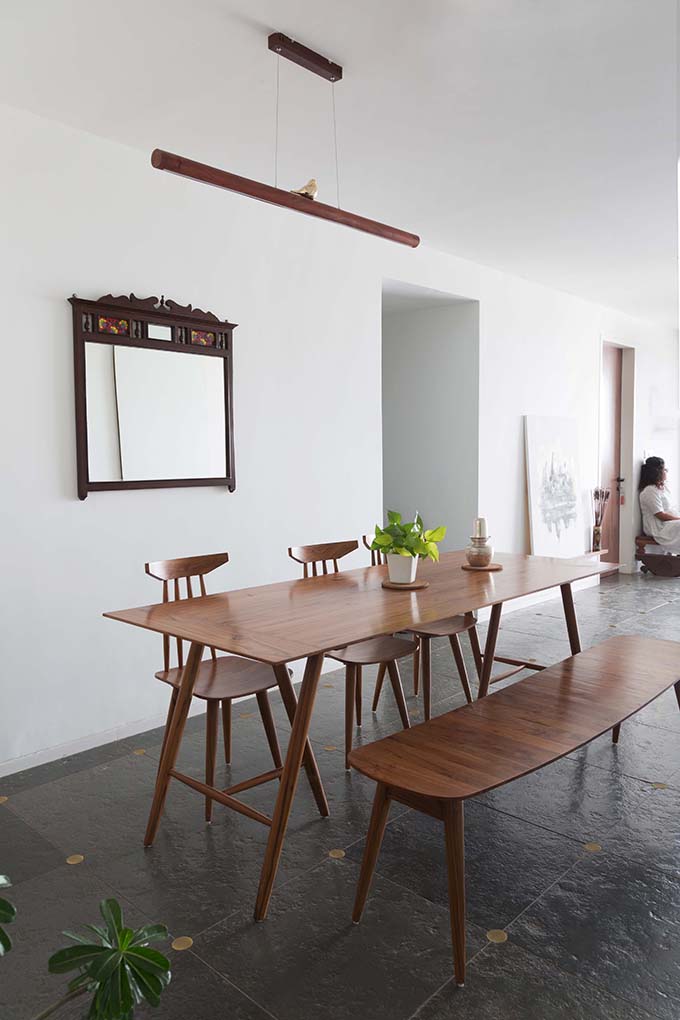 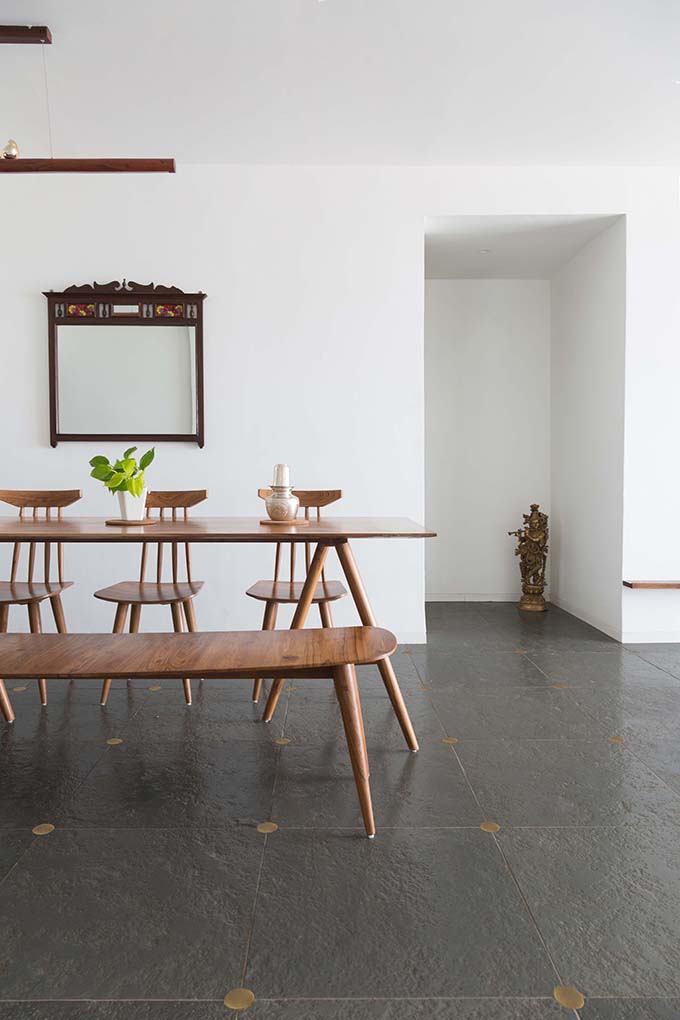 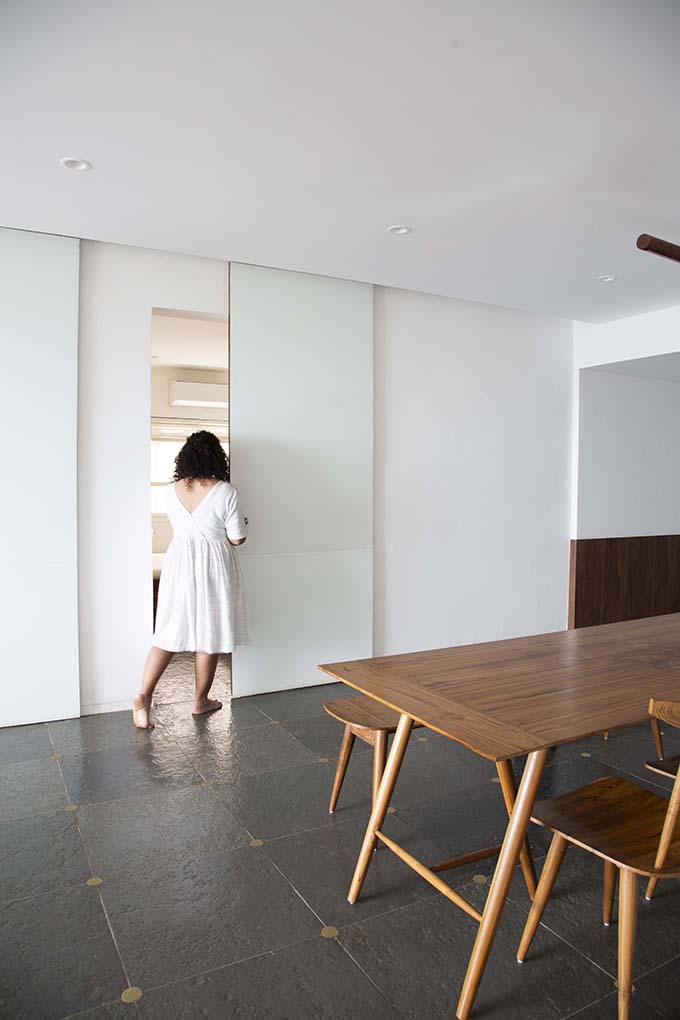 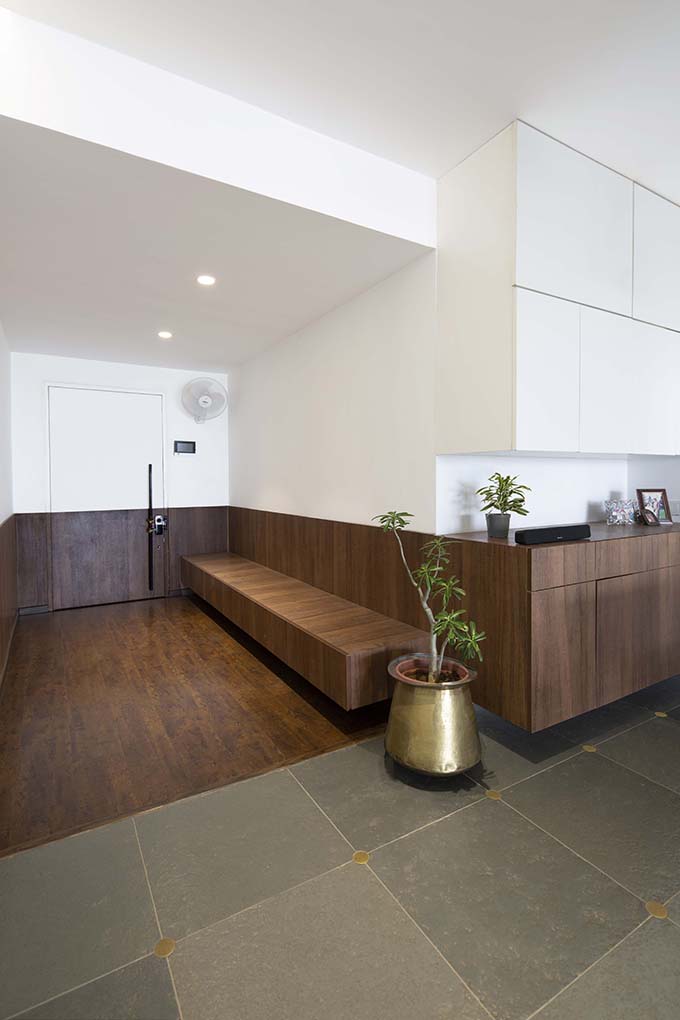 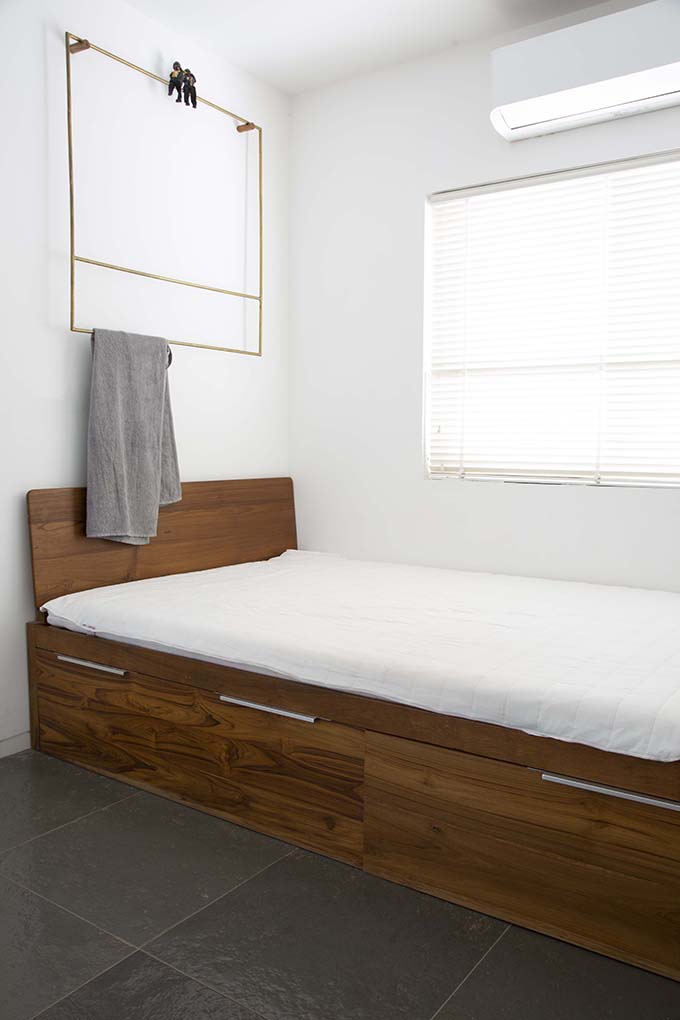 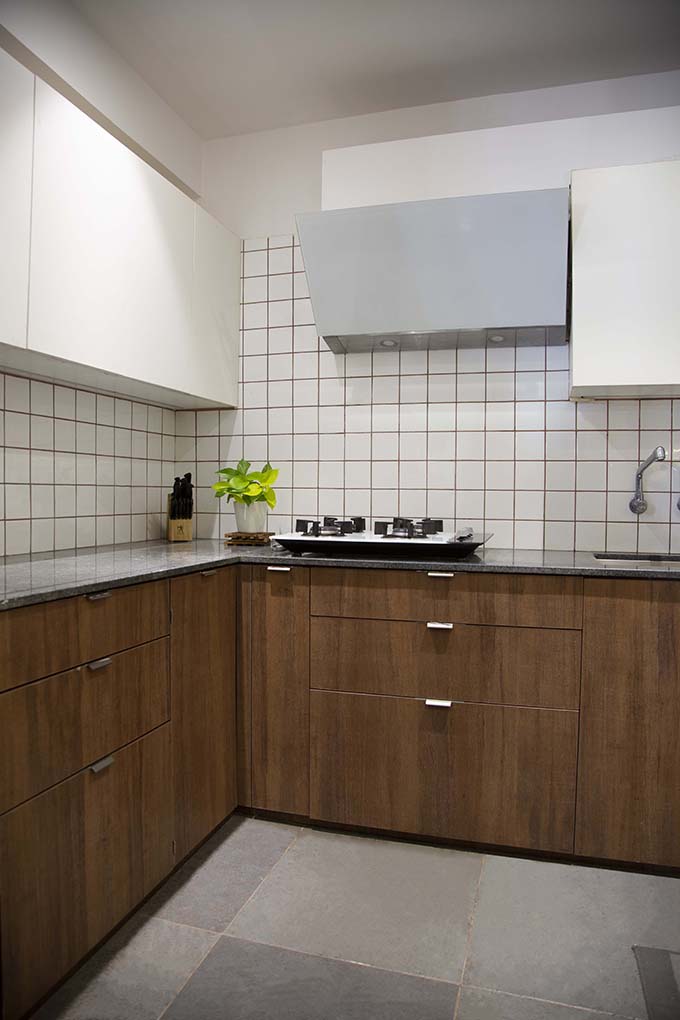 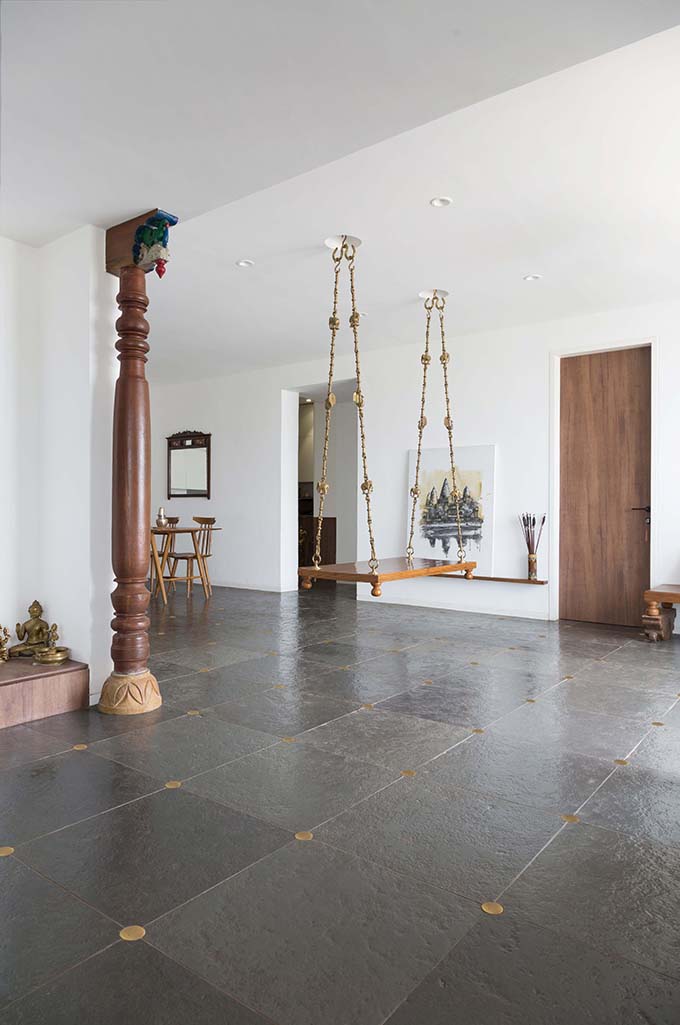 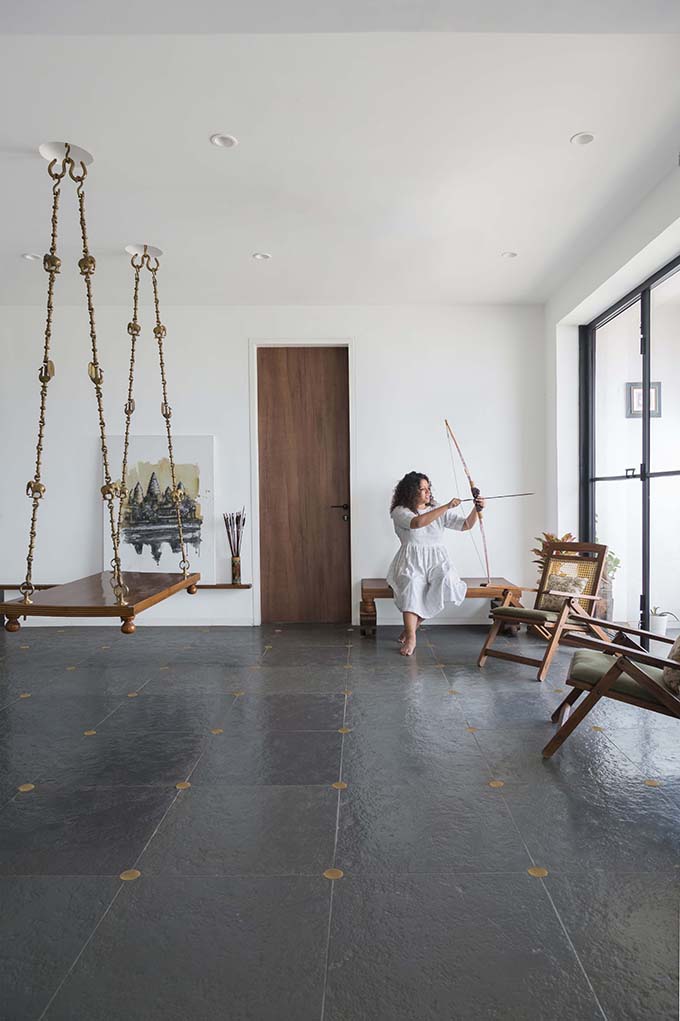 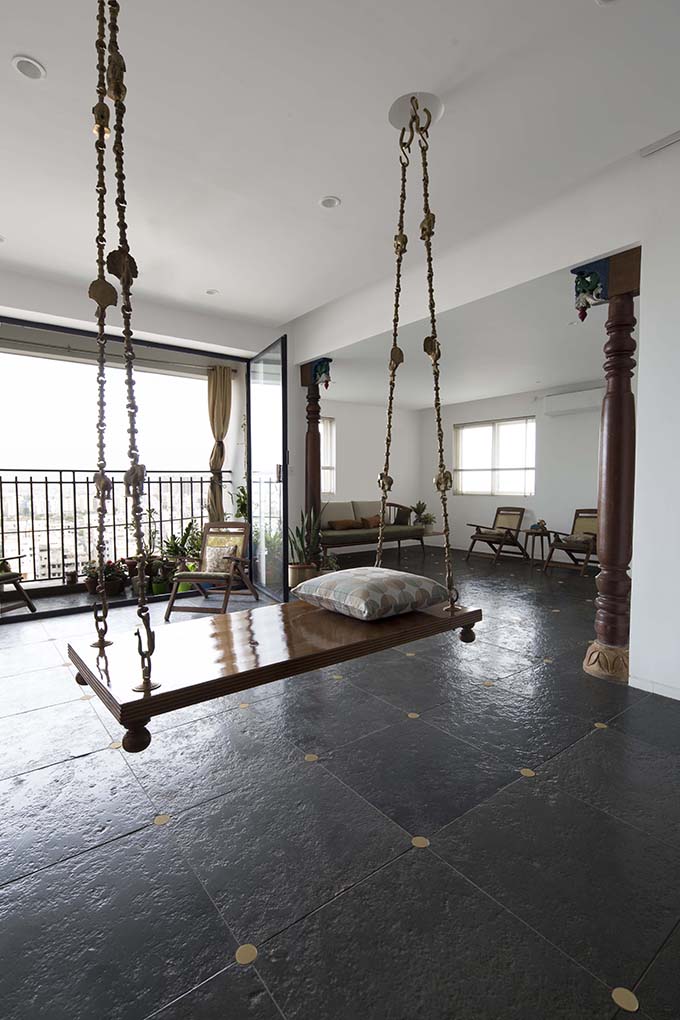 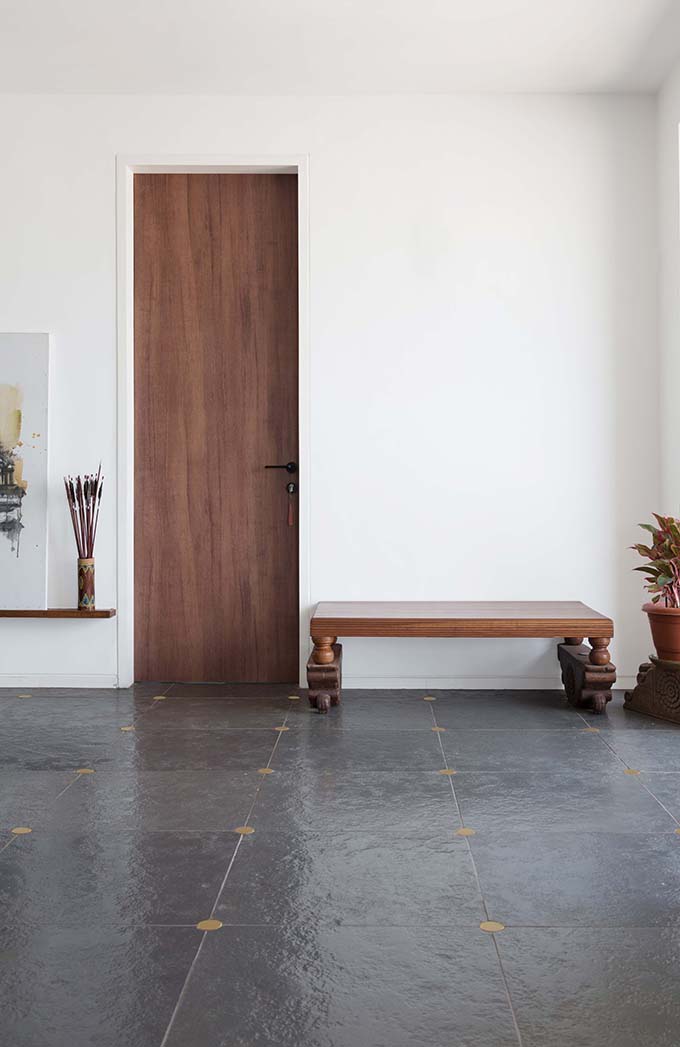 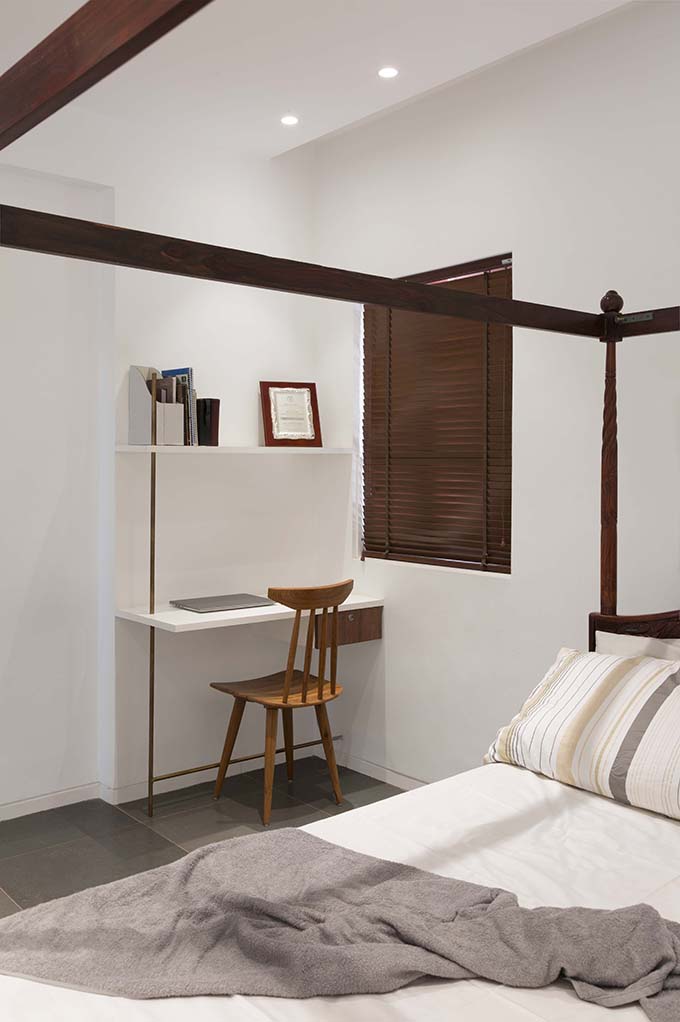 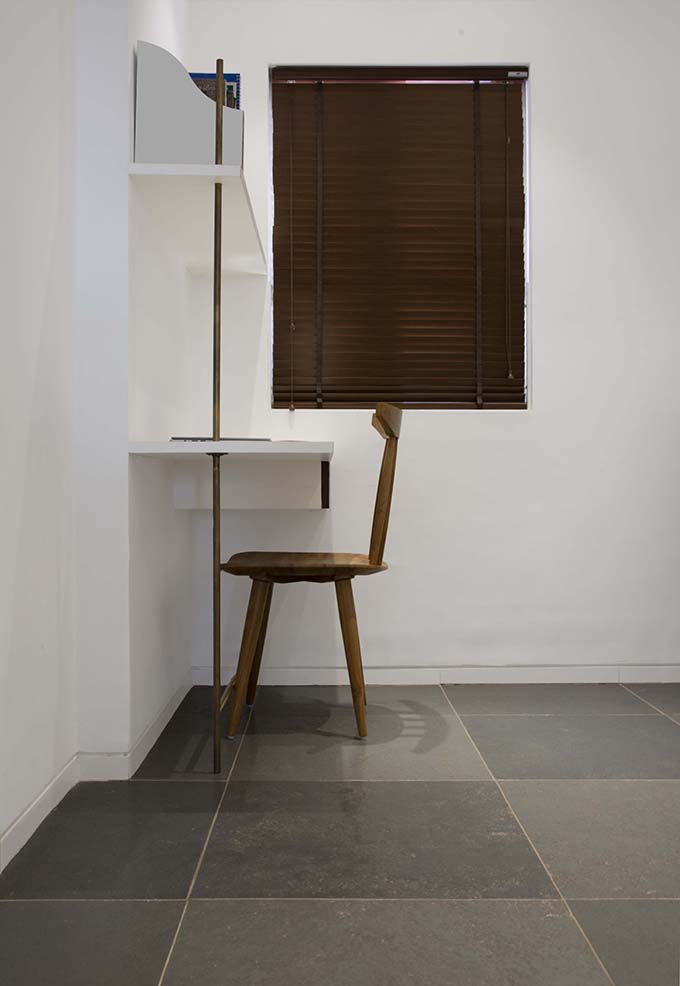 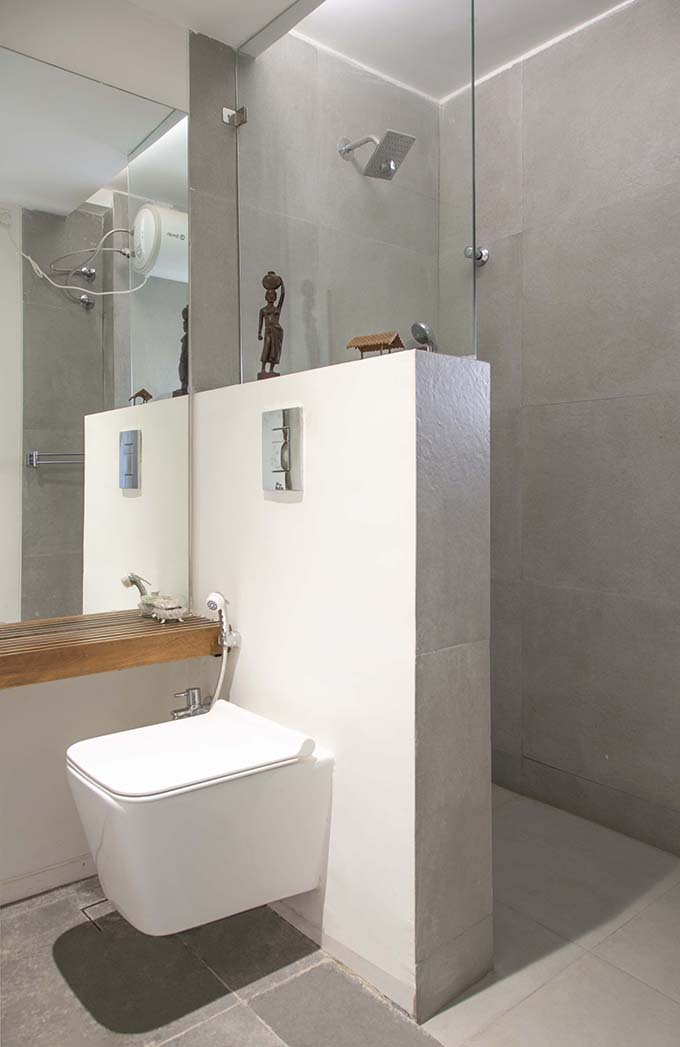 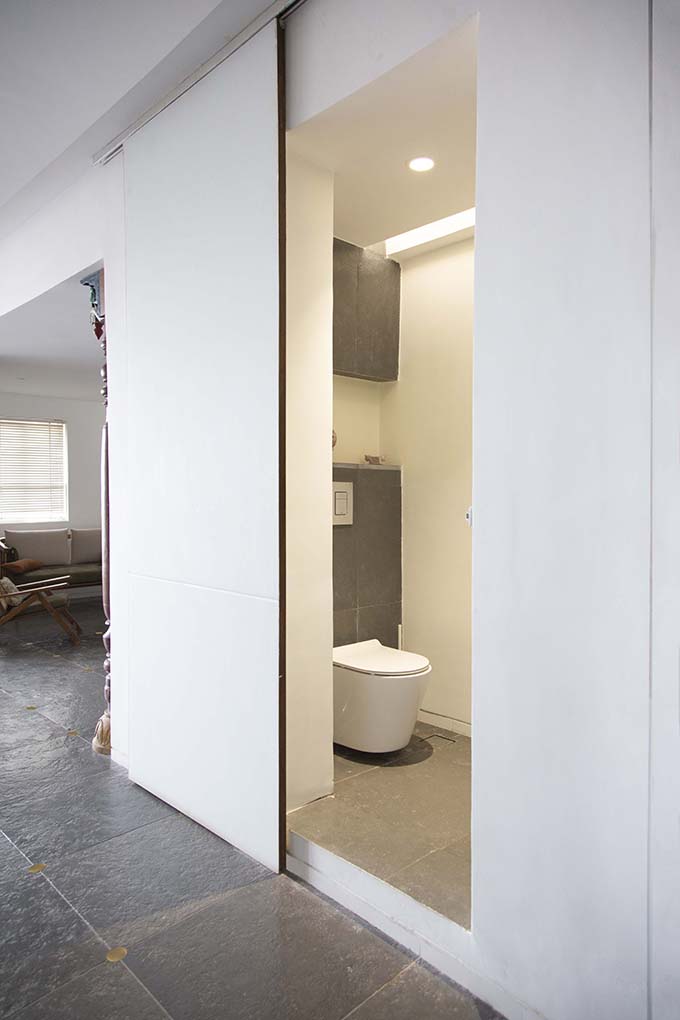 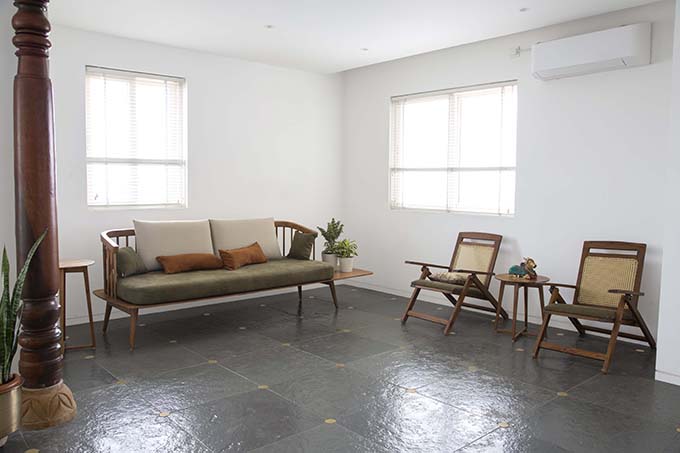 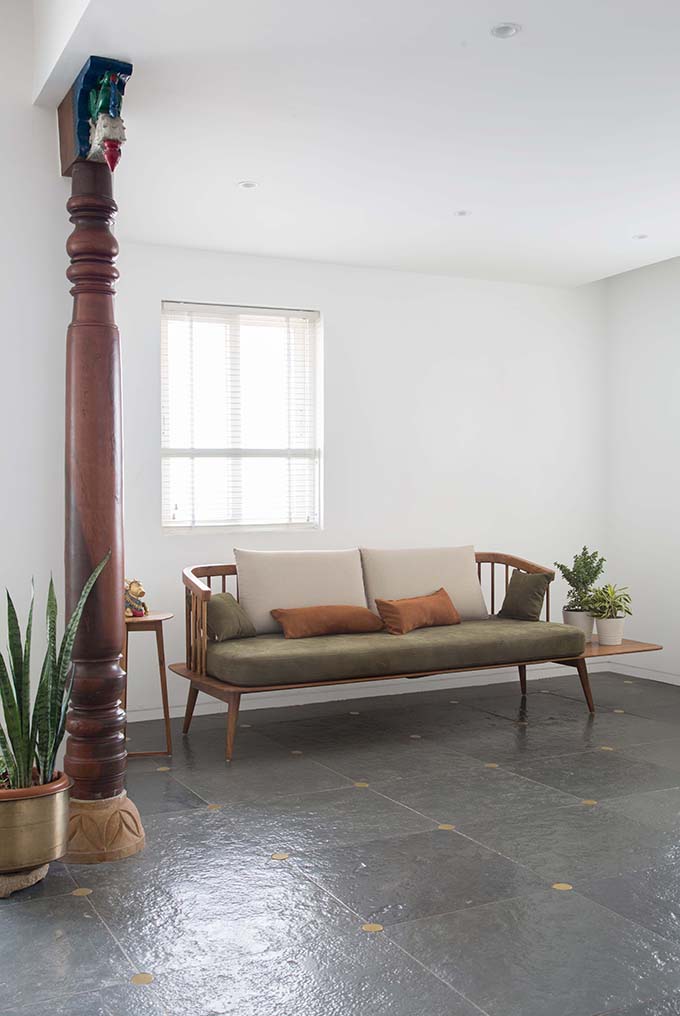 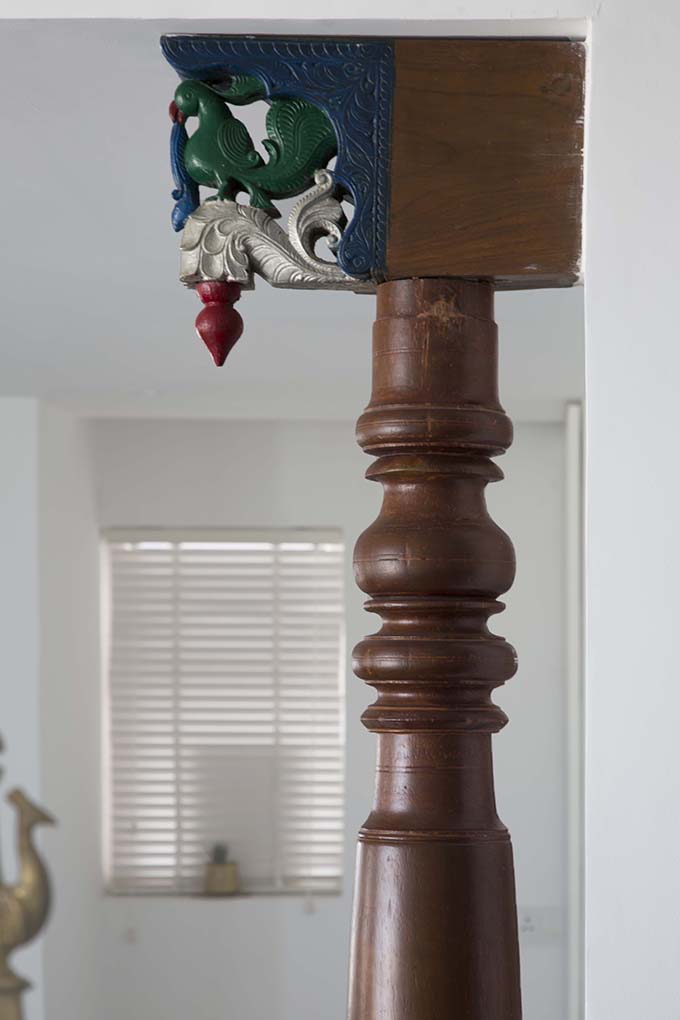 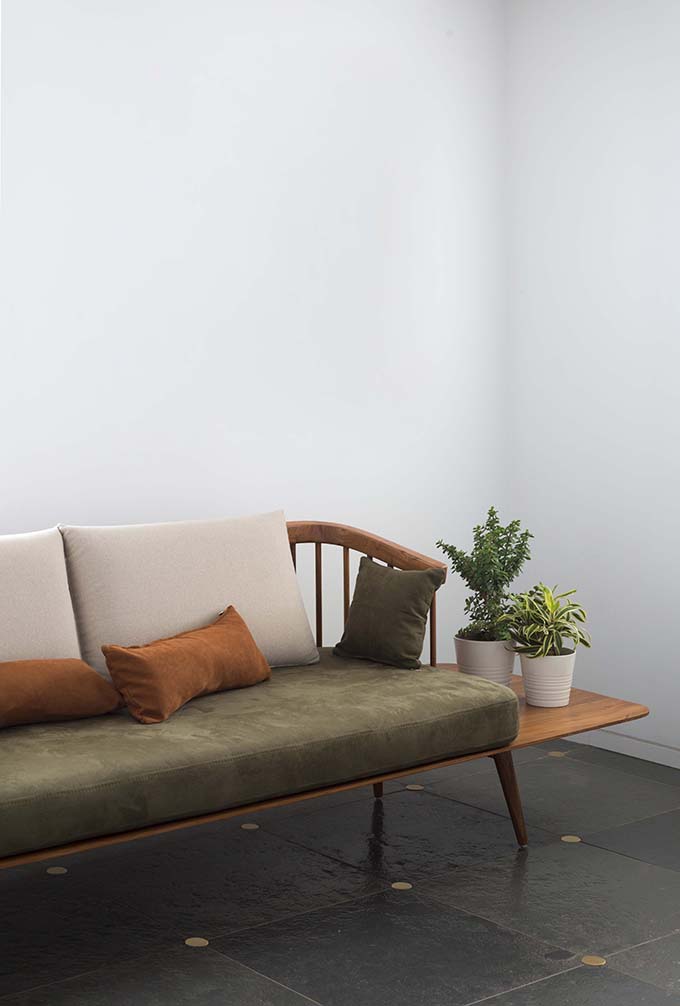 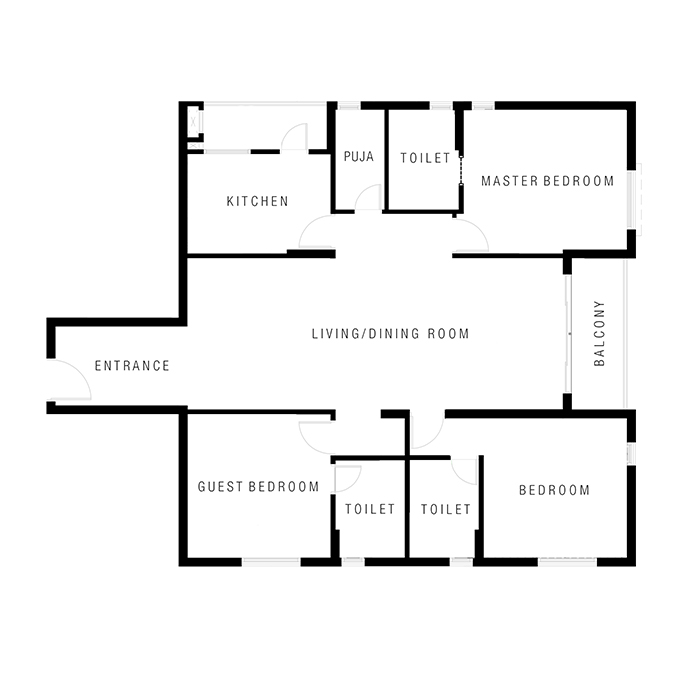 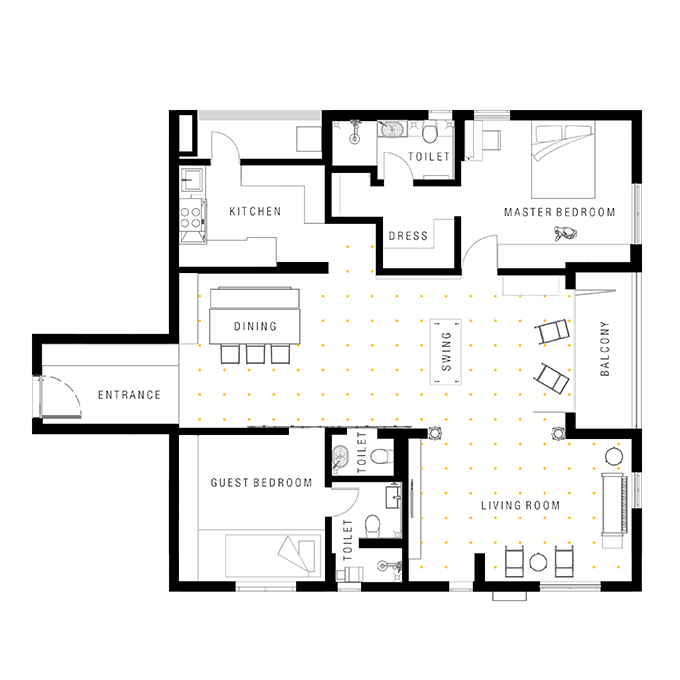 From the architects: After his retirement, Mr and Mrs Jayasimha Reddy wanted to settle down in the city, bringing them closer to their extended family, most of whom have settled down in Hyderabad and have established businesses.

Hailing from Kurnool district, and growing up around there, the clients share an affinity towards the countryside – living amongst carefully hand-crafted spaces by generational artisans and waking up into wide open spaces.

When they initially purchased their apartment, in one of Hyderabad’s fastest growing areas, they discovered, as is usually the case in the city, that their new home was much smaller than what they were used to. They wanted to bring in as much of what they cherished of their previous homes, with as little clutter as possible. They longed for a home that would be clean, functional and minimal, while also having the essence of a hand built traditional countryside home.

After a lot of thought and deliberation, they decided to approach Design Experiment, a design firm known for their philosophy of decluttering to work on their apartment.

The architects envisioned a home by applying principles of modern design, decluttering the space and interweaving it with traditional Indian materials and artefacts that the clients brought in with them from their ancestral properties. The final design is an amalgam of traditional village craftsmanship and modern minimalist design.

Some of the key functional changes to the apartment include creating additional wardrobe space, adding a powder room, a TV room and extended bathrooms. What was initially going to be jammed at the kitchen’s entrance, a compact puja was created in the TV area as per the request of the clients for a discrete yet functional puja.

This fusion of design ideologies is apparent right from the entrance door – which is made up of a combination of traditional rosewood aesthetic and slick white glass with biometric authentication built right into it. A thin brass separator gives a hint of what is to come. A stone bottom threshold and a contemporary oversized handle round out the entrance.

The entrance area is a small alcove for footwear and an extra seating space. The space is all clad in wood and serves as a contrast to the wide-open living space just beyond it.

Being used to wide open and airy spaces, the clients found the rigid openings of traditional UPVC French doors to be rather limiting. The architects decided to frame the breath-taking view of their 15th story apartment with a custom designed slide and fold steel door that completely removes itself, bringing the outsides closer into the living space.

The main living space is divided into three zones, the dining area, a casual sitting and a TV area, tucked away from view.

The dining area reveals itself as we walk into the apartment. What was once an extensively used material, Traditional Tandur flooring adorns the floors here with circular brass inlays to bring in a sense of reminiscence into the space. The dining table itself has been developed to blend into the narrative of the house with its modern aesthetic crafted with wood.

A swing from their ancestral home helps visually separate the dining, and leisure space at the balcony while becoming a centrepiece where the family can relax with the view of the city in the background.
Mr. Jayasimha, with his keen interest in gardening wanted a small garden which was accommodated in the balcony.

The doors to the powder room and the guest bedroom are designed to be in plain white and visually out of the way, while still adding a modern appeal to the space.

What the builder envisioned as a 3-bedroom home didn’t fall in line with the client’s current context where it is just the two of them with family visiting occasionally. Keeping this in mind, we decided to do away with one of the bedrooms and its attached bathroom making room for a TV area that helps open up the apartment from the entrance in. Indian rosewood columns almost half a century old, salvaged from their country home, adorn the entrance of this space.

Following a similar language to the dining room, the furniture in the TV room consists of a custom developed couch, and restored chairs the client had had, that we felt completed the room. The folding chairs were almost 25 years before being restored for the project.
To accentuate the aesthetic of the older furniture, we decided to make everything surrounding them white, including the cupboards. This helped increase their prominence in their individual spaces.

Decluttering as a concept can get misinterpreted to be a philosophy where getting rid of things is the primary objective. On the contrary, the intention is to create space, retain and if possible refurbish items of value and add pieces that help optimise usage. While delving into this we decided to retain an old cot that belonged to their ancestors while designing a new piece for the guest bedroom with extendable parts to make room for additional guests/family they’d host during festivals. Elements made of brass were designed to be aesthetic inclusions while being functional in the form of hangers and door handles within the bedrooms and washrooms.

Images are courtesy of Design Experiment 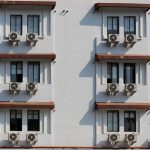 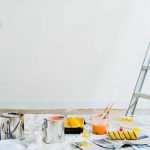