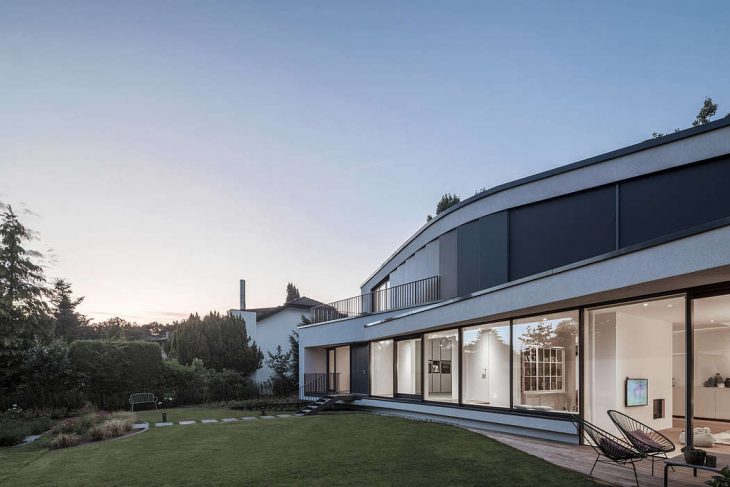 One Fine Day designed  this inspiring private residence located in Dreieich, Germany, in 2016. Take a look at the complete story after the jump. 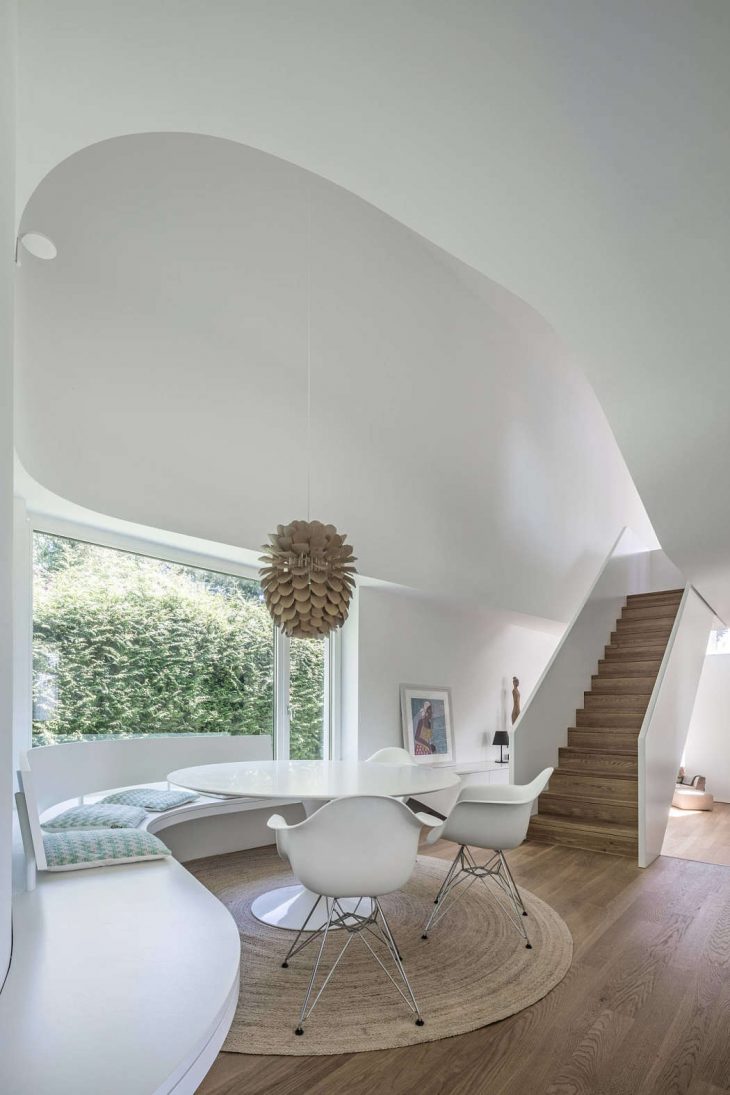 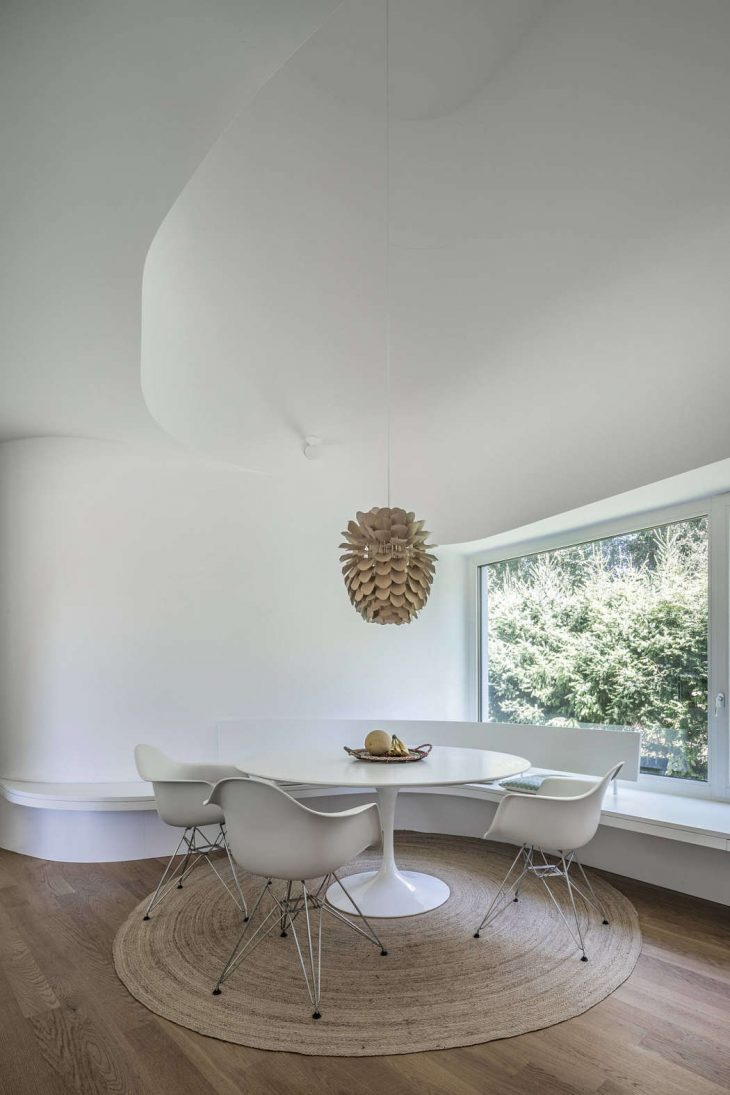 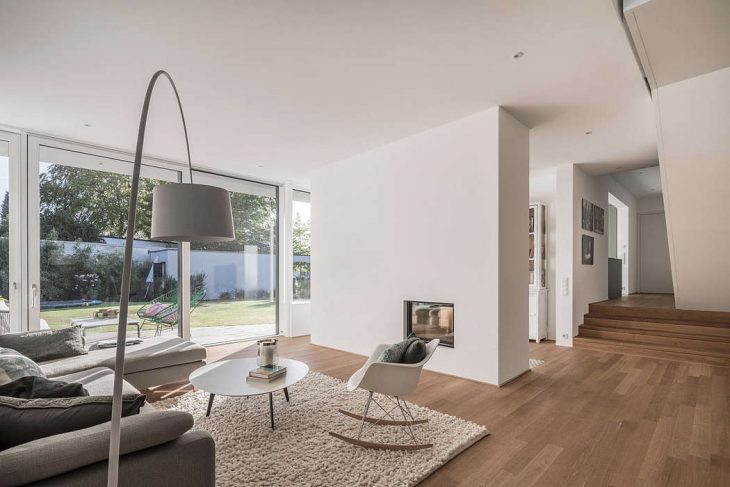 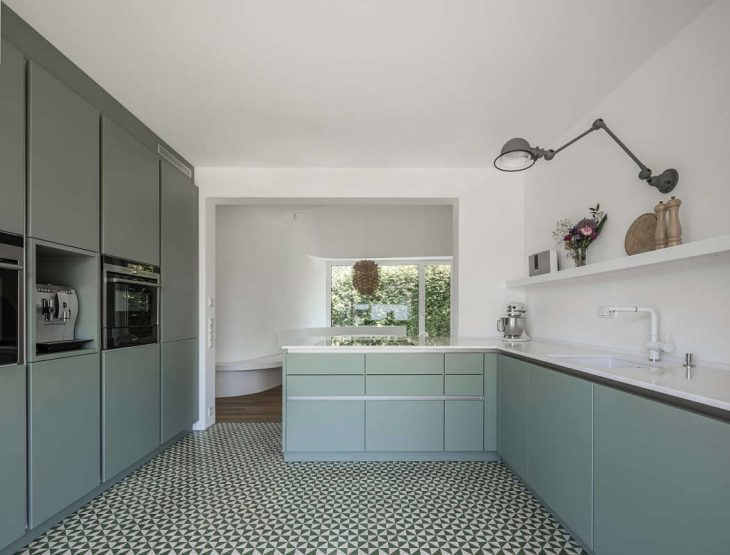 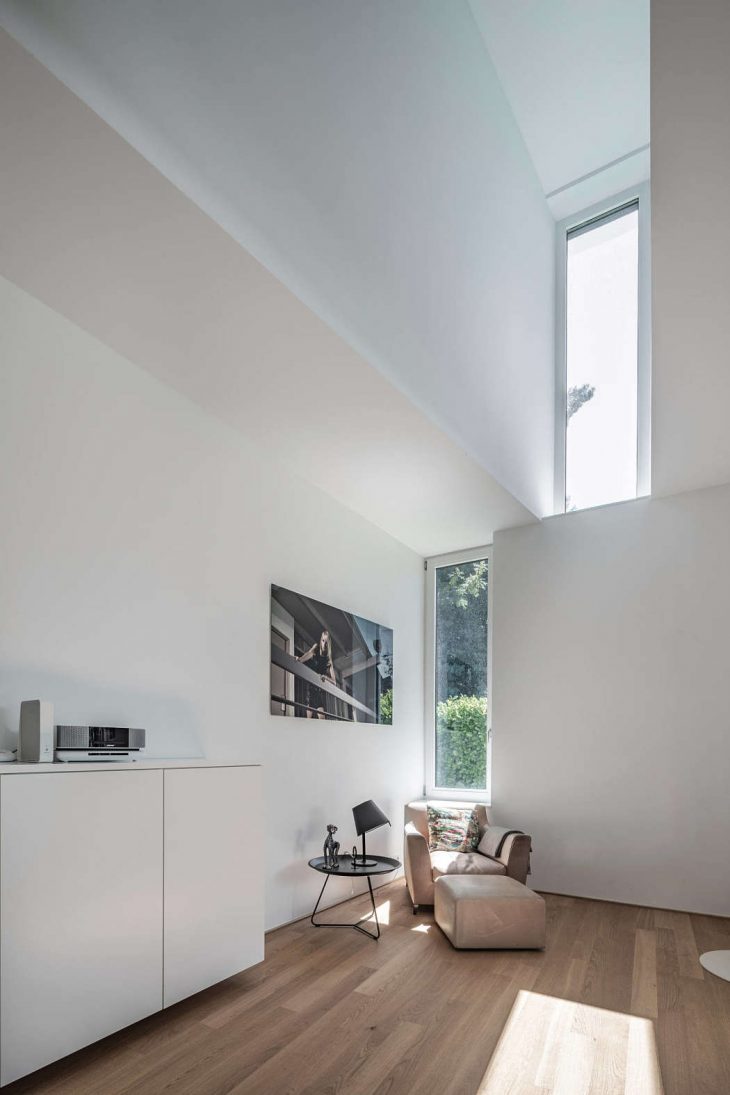 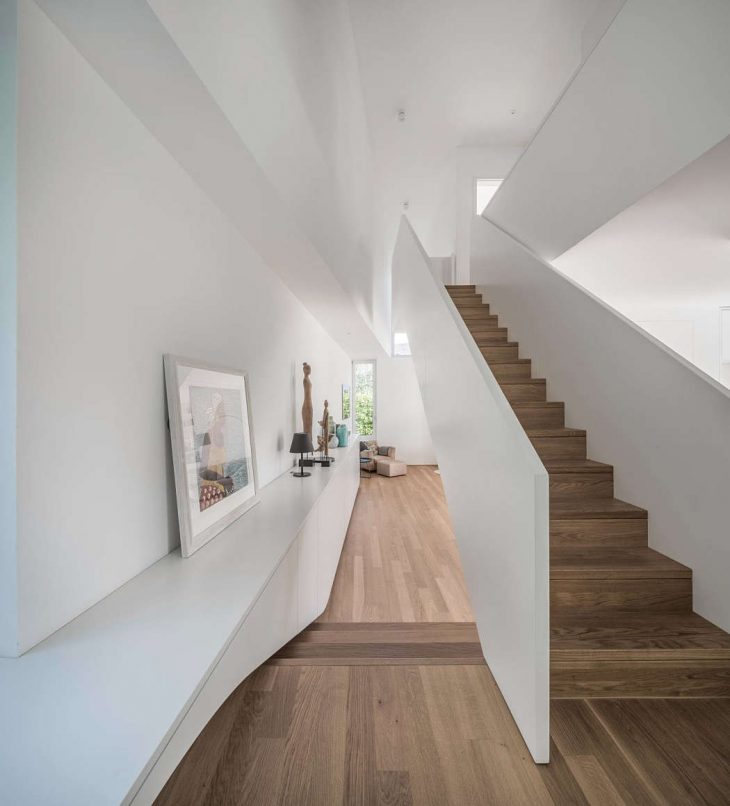 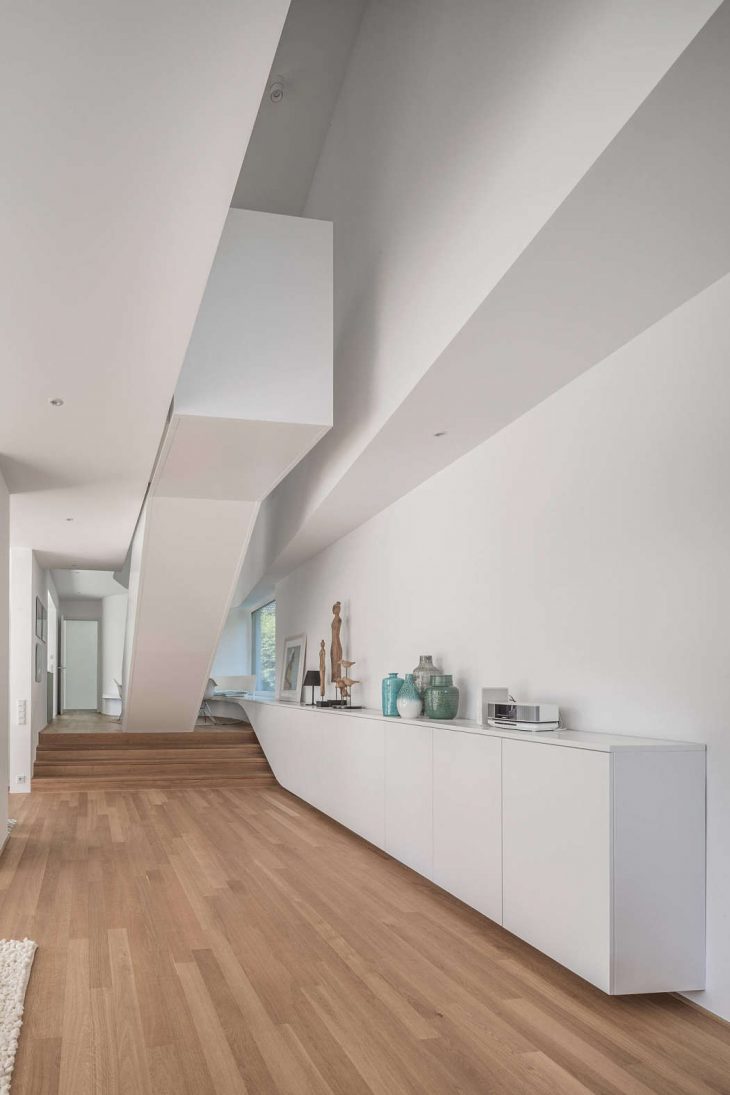 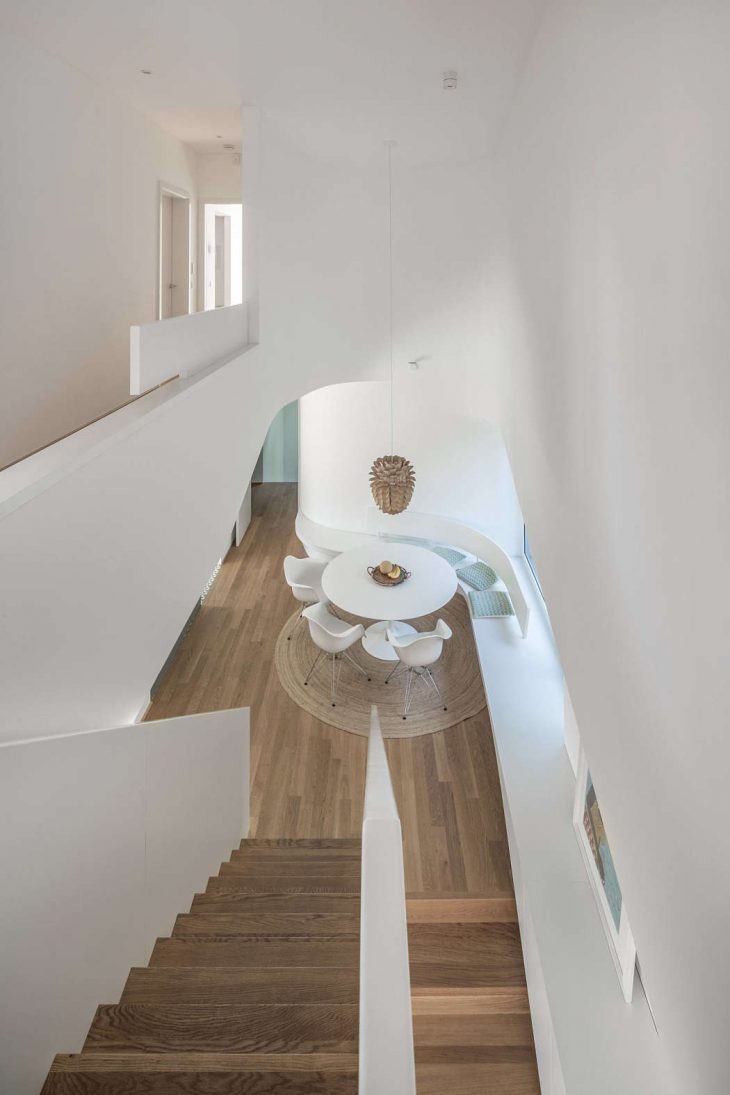 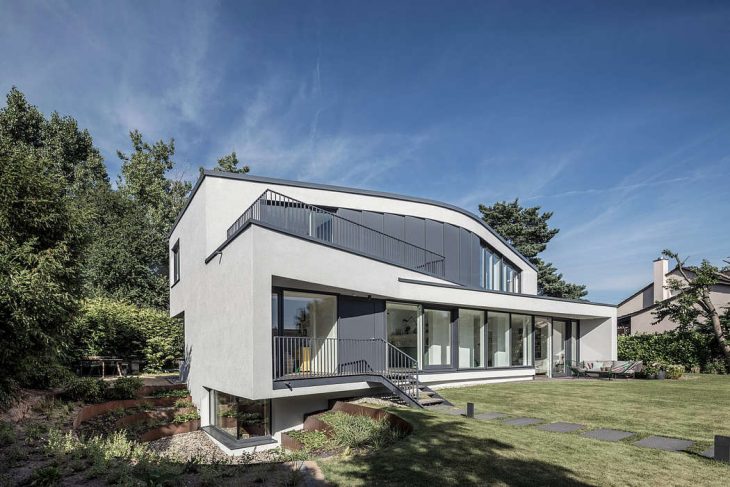 Haus B is located in in the town of Dreieich, within the vicinity of Frankfurt am Main, Germany. Here the house is embedded in a quite typical suburban housing settlement that had been developed during the 1960s. Today, this settlement depicts both: the aesthetics of an increasingly wealthy, yet rather conservative and homogeneous suburban society during the so-called “Wirtschaftswunder” of post-war Germany; and a heavily plural and individualist approach towards the aesthetics of one’s own house that manifests itself in a rather eclectic collage of styles since the 1990s.

Haus B is based on strictly ordered geometrical relations that allow for a certain degree of elasticity in order to respond to the different demands of, the client, the place, or the building authority. While it is conceived of a careful reading of the place, the house needs to respond to the rather technical influencing factors of its site as well. The building stretches as an elongated volume from north-west to southeast and exploits solar gains while it protects the garden from the noisy street at its north side. The slightly deformed volume adopts the directions and comparably low heights of the neighbouring eave-lines. It is then raised at its centre in order to softly translate the obliqueness of the neighbouring roofs and blend them with the advantages of an explicitly modern flat roof..

The house’s south-façade has to solve several important, yet contradictory functions at once: it has to be inviting and representative as it organizes the casual cohabitation of an everyday family-life. Here, the exploration of different outside spaces, such as the porch that preludes the front-door, the terrace that enlarges the adjacent living-room, the roof-terrace that completes the master bedroom and the roof-garden in front of the children’s rooms is used for both: it strengthens the connection of house and garden as well as it defines the building’s ‘Gestalt’.

The interior of Haus B is closely connected to this zone of transition. From here several well-known housing-typologies, such as an enfilade along the glass-façade, a gridded array of rather functional spaces, or a double-height space with gallery and open stair – all stretched across a split-level – blend to form a comparably rich and continuous living-landscape.

Haus B has been conceived and equipped to exceed the requirements of the latest German energy saving regulations (EnEV). It has been directed towards south/south-west in order to gain as much as possible solar energy during winter, whereby the projecting roofs and adjustable canvas blinds protect the interior from the sun during summertime. Next to the application of durable materials all exterior wall and roof surfaces contain up to 20cm thick layers of thermal insulation. All windows are at least double-glazed. A heat pump driven by solar panels provides the house’s heating and warm water-supply. 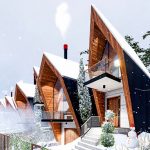