AN INTERIOR STREET THAT STRUCTURES THE ENTIRE BUILDING. Our thinking on the project and its relationship to the context led us to split the building into two stips to create a large inner street. This intersticial space is unifying the different activities of the building and generates a strong link between the outdoor spaces : the public phaze entrance and the open air theater. This double height street, is an extension of the outside environment into the building. It connects differents parts of the program by suspended walkways. Like a funnel, that space is expanding at its ends to create an opening to the outside. In direction of the city, it connects the building plazza to an open air theater on the other side that is overlooking the park. A glass roof raised above the street accentuate this relationship with the environment making extensive natural light in this space.

The layout of the building is a simple rectangle which is set up at the heart of the site. On the building periphery we put the offices, art workshops, studios and utility rooms. Our goal was to create a place of remarkable qual- ity, by its openness to the surrounding urban context and through its strong identity. The building is designed as a concrete envelope.

The concrete building facade is lifted frome the ground at the street entrance and open the building gener- ously to the intersection of major circulation flows. The canopy of the interior street is cantilevered above the entrances to create a large circulation.

A HOUSE OF ARTS IN A DENSE URBAN CONTEXT. We aimed to develop a certain porosity of the building envelope to the outside environment. The theater is placed in the center of the building to avoid creating blind or purely technical facades. The facades are per- forated with elongated window shapes that cut facades and singularly identify this cultural facility in the city. We designed a system of diamond-shaped bays, whose geometry is derived from an architectural interpreta- tion of a musical phenomenon. Inspired by the work of the painter Wassily Kandinsky on music and formal composition, or Vera Molnar on digital art, the facades present as a superposition of parallelograms forming reliefs and frame in the concrete shells.

The appearance of the site, both in the natural and in the urban aspect inspired the shape of the building. The volume of concrete shaped as a sculpted rock easily refers to the condition of the site while the rawness of Cultural Center of Épinay-Sous-Sénart(France) the material reminds the urban context. These two paradoxal aspects of the site are integrated in the project structure and envelope, between redundancy and optimization, between strength and fragility, between singu- larity and diversity. LIGHTING AND INTERIOR ATMOSPHERE. The roof is an important part of this project, it is conceived as an intelligent high-performance skin, which con- trols the atmosphere inside the building and incorporates the technical features of the theater and the thermal control. It allows the development of bioclimatic building with a focus on natural ventilation.

Natural light plays an important role in the cultural center spaces. All areas of circulation and reception areas are largely swam with natural light directly by the curtain wall of the lobby, through the canopy of the interior street, or by the “sheds” that punctuate the roof of workshops. This device allows bathing spaces with natural light all day without overheating.

They play an important role in the definition of light environments inside the building, through their size varia- tion. By late afternoon, lamps connected to photosensitive cells installed under the canopy and in the “sheds” gradually compensate the lack of natural light. 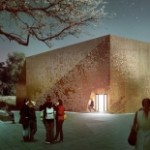 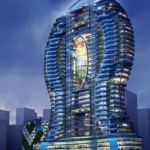