Built to replace a 1950s youth center in Joué-le-Tours, France, Le Temps Machine (the Time Machine) is a radical revision and, conversely, homage to the original facility. (An initiative of the country’s first Minister of Cultural Affairs, Gaullist and intellectual André Malraux, such youth centers were an important institution in France.)

A few years ago it became evident that the building no longer met contemporary standards and requirements. The competition, won by Jacques Moussafir’s team, called for the renovation and expansion of the venue. The architects suggested maintaining the patio and some significant fragments of the structure, including that of the concert hall – an identity-shaping element of the old building. Highly prominent on the facade, this prow-like form once contained the audience seating. Today it houses a 150-strong cabaret-style space (the Club), while the Grand Hall for a standing audience of 650 is placed right behind it, with rehearsal rooms tucked below the Grand Hall.

URBAN INTEGRATION: A MUSIC VENUE OPEN TOWARDS THE STREET

«Performance halls are often closed, blind volumes, so every time we design a concert venue, we try to open it towards the surrounding context,» says Jacques Moussafir. The Time Machine with its largely transparent street-level facade is not an exception. For stronger contextual integration, the project divides into two distinctive parts. The resolutely horizontal concrete + glass base houses a fluid and open interior space; deep projecting eaves create a welcoming feel. By contrast, the roof reveals three opaque, powerfully articulated volumes – the Club, the Grand Hall, and the resource centre – that seem to burst through their flat pedestal.

«The contradictory image we were aiming at is that of a unique yet familiar object, the one that challenges yet invites appropriation,» comments the architect.

True to his taste for paradox, in the Time Machine Moussafir inverts conventional exterior/interior characteristics. The building appears hard on the inside and soft on the outside. The interior is all about raw concrete, glass, and stainless steel. (From a practical point of view, the use of concrete for inner spaces efficiently reduces the need for artificial cooling – fundamental for a concert hall! – due to the thermal inertia of 35 cmthick walls.) The red-and-black color scheme of performance halls is juxtaposed to the total whiteness of the roof, literally upholstered in FPO membrane. Besides enhancing the «soft feel,» this proved the best way to deal with the material that was originally intended for horizontal surfaces only – and not for bold experiments in sculptural stretching. 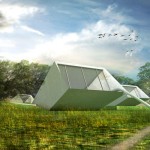 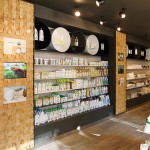