Kubota & Bachmann Architects practice had designed a proposal for the "Russian Character” Culture & Education Center located in the Moscow, Russia. For more images and architects' description continue after the jump.

For us, this building has answered what modern Russian architecture has to become, a simple and efficient building where the implementation of programs and practices in the inside creates connections (visual and physical) and a possibility to share. There is an intense dynamism to support social and urban life. Generic volumes, simple and efficient envelopes with constructive and fiscal coherence, where the essence is in finding quality in buildings throughout their logic, their simplicity and their ability to activate indoor and outdoor public spaces without useless ornament or formal complexity. This is what represents the Russian character.
Russia's traditional and modern culture is diverse enough to nourish modern architecture through unlimited amount of cultural references. The appropriation and development are through modern signs and languages based on new technologies and techniques. Its architecture should avoid superficial and misleading inventions and aim towards the reinterpretation of its own culture and the evolution of its knowledge. Honesty has been, is, and must continue to be the leitmotif of Russia's identity in architecture.

Envelope
To reinforce this idea of abstraction, erasing the concept of scale, the buildings envelope follows a simple geometric frame, based on the most stable geometrical shape, the triangle. A pure and indivisible geometric shape, applied to the building's repetitive frame, trying to clear the scale marks commonly found in façades by the horizontal lines of conventional floors, distance between columns, etc…. In this project, geometric guidelines of the building are removed, leaving a great constructive and formal simplicity.
In addition, the triangular pattern is a significant and recurring reference in Russia's traditional and contemporary culture. Integrating the triangle figure in the building's façade reflects on this tradition, with a modern and radical interpretation created for the project.
We explored the potential of the geometric shape of the triangle, which is a very suitable design for a structural façade. Dimensionally stable, triangular frames allows optimum transmission of forces without distortion of the frame, thus without danger for front fills. The stability of the frame drops the weight of the structure and reduces costs significantly. Landscape
The landscape project is a re-creation of fragments of landscape adapted at a human scale on an orthogonal grid where various gardens succeed: the square lawn, a mineral garden, a parterre in bloom, a low vegetation, a woody vegetation, a wooden deck, a vegetable plot and eventually a garden of sculptures.
The various gardens will be separated by pedestrian crossings of different sizes. It will be a promenade through Butovo Park.
A particular attention was drawn to the roof, the fifth façade of the building. Seen from the neighboring adjacent towers, the roof is designed as a continuation of the landscape frame from the south garden, ensuring the continuity of the landscape selected. From an elevated position, it changes the perception of the building as it almost completely disappears into the landscape. 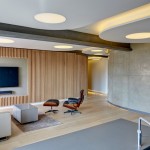 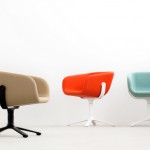