One of the world’s largest exhibition companies NürnbergMesse enlists Zaha Hadid Architects to construct Hall 3C following the growth in exhibitor and visitor numbers since 2014, when the Hall 3A was finished.

Continuing the successful principles developed by Zaha Hadid Architects for the existing Hall 3A, the trapezoid-shaped, 10,000 square metre floor plan of the new Hall 3C varies in length from 95 to 145 metres and is 85 metres in width. Its inclined roof drops from 20 to 13 metres in height to give acoustic benefits as well as reductions in energy consumption and emissions, while 3,000 square metres of glazed facades enable natural light to penetrate deep into the hall. – from Zaha Hadid Architects 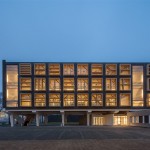 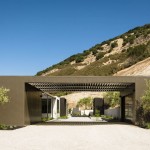