Paris based Stephane Malka designs EP7 Restaurant as a meeting space accomodating cafe and a restaurant using an accretion of raw wood, primed for the organic growth of plant life, marvelously creating the cover for an urban space. For more continue after the jump: This place evokes the notion of myth, a return to original architecture, abstract landscape of a lost paradise, an evocation of a mountain, a cave, a forest and clearing. Stimulate the desire to reconnect to the earth along with the built environment by generating a new relationship, more harmonious, between man and nature. It is a referrend to land art, but in the city, an urban art that became affiliated with the earth.

The dense forest makes room for the woods that are scattered along the clearing of the transparent facade.

It is an evolution of species and sense of materials.

The masses intertwine and challenge each other.

This place then becomes a resurgence, a renaissance in the city’s reliance to territory and landscape.

It is a contrast between two aesthetics, one inherited many millennia ago and the other invented by our new born century.

Thus wild green walls are born from delicate sections of wood which gradually spaces out, letting the light shine through the glass.

These three moments are completed by media walls installed on the inside part of the glass, playing with transparency towards the scene and simultaneously the projection of another place or just another point of view with a different scale .

This generous electronic surface recalls a pixel, but in a three- dimension, due to the turnaround plans of the angle.

A method as retro as this very Parisian guinguette, in the tradition of the typical french taverns, but with an advanced technology and yet very ruff.

These modular units are the basic units of the constitution of the skin of the guinguette.

Perceptions of the limits of glass are thus blurred.

The project, expanded, follows these perspectives.

However, the guinguette is the meeting point of extremes; the mass and the evanescence; nature and architecture; the thickness and fineness; shadow and light 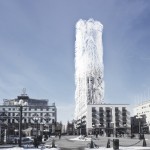 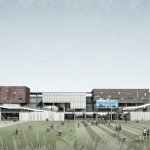