Third prize in the much talked about architectural competition for the design of Container Vacation House named [SYDNEY 08] comes as the project design by Australian team of architecture students James Moulder and Andrew Nicolle. This noted competition was hosted by [AC-CA], discover more of the project after the jump: Concrete- characterised by or belonging to immediate experience of actual things or events; solid, real, tangible.

Anamnesis- a recalling to mind; reminisce. Shipping container housing, utilised numerous times in locations all around the world, is now recognised as an architectural typology in its own right. Using structurally sound containers, stacked and cantilevered on top of each other, container housing speaks of an architectural form that expresses in itself the practical and functional nature of internationally standardised shipping containers. While the use of structurally sound containers for housing enables the sustainable reuse of containers nearing the end of their lives, it does not address the issue of the estimated 30,000 damaged containers currently in the oceans, or the additional 2,000-10,000 containers which fall off ships annually. These containers require on average 8,000 kWh to melt down, more than an average house uses in 1 year.
Our concept proposal, Concrete Anamesis, builds upon, yet is vastly different to ideas associated with container housing. Starting with damaged containers, no longer suitable for use in shipping and destined for the scrap yard, the Bondi vacation house gives purpose to these containers, using their damaged panels as formwork for the house. The damaged containers are organised on site according to the programmatic brief of the house and in order to best capture views, natural breezes and daylight. The intersection of these containers creates void spaces which, when cast in concrete, become solid forms.
This solidification of what was once void space turns what would normally be inert voids into space defining solids that defines rooms and areas of the house and imparts a captivating spatial quality to the house, speaking not only of the arrangement of the damaged containers but also of their memory. The concept of memory centres on the notion that memory takes place in space; it is related to both a temporal sense and a spatial experience. The cast form of the containers reflects the spatial experience, while at the same time those very deformations that shape the physical form also hold permanent an event in time, reflecting the temporal sense. It is these imprints, these memories, which inspire contemplation by the occupants of the containers rough lives at sea.
Concrete Anamnesis uses a sustainable concrete sprayed onto the deformed container formwork. Consisting of highly insulative Liapor high quality expanded clay as aggregate and using new technology that replaces cement with crushed waste glass, the cement has an estimated embodied C02 of less than 30kg/tonne. This concrete mixture results in low embodied energy building material, suitable to the exposed and harsh conditions of the site upon the headland. Concrete Anamnesis results in a vacation house that captures both the embodied memories and the beauty in the fragility of the deformed container, whilst providing a use for disused and structurally unsound containers within the harsh costal headland environment. 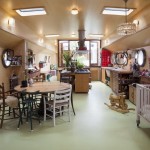 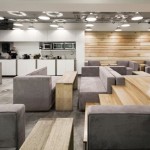