Uberraum Architects designed this contemporary residence located in Münstertal, Germany, in 2016. Take a look at the complete story after the jump. London practice UberRaum Architects have built a mountainside house with dramatic interiors and framed views inspired by its surrounding landscape.
Cloud Cuckoo House in the Black Forest, Germany, sits at an altitude of 800m above sea level. When fog drifts into the valley, the home for a young family appears to float above the clouds, enjoying magical uninterrupted views across the fairytale landscape of the Upper-Rhine area.
The steeply-sloping site was home to a humble detached house, which the occupants had outgrown. Part of this was removed, leaving a one-storey concrete plinth which now houses the bedrooms, which the new building soars above.
Cloud Cuckoo House grows out of its steeply sloping mountainside location, with rooms and spaces cascading down the hill, creating a living landscape of terraces on different levels, all under one roof. The staggered levels are all interconnected and allow the individual family members to get together on the wide plateaus, yet also find their own private niches tucked away in the hill.
The building consists of two parts: the original 1950s ground floor, and a new wedge-shaped timber structure sitting perpendicular on top.
A new terrace lies to the side of the new extension, and creates one of several landscape platforms.
The existing plinth has been reconfigured, and now bedrooms are below living spaces, nestling into the hillside to create a peaceful environment with a beautiful view down the valley.
The new prefabricated timber structure perches atop the plinth, providing a series of open-plan living spaces, under one big roof. An eight-metre wide gallery window brings natural light inside and gives panoramic views 50km down the Rhine valley.
A large void was cut through the existing plinth floor, and a continuous oak staircase inserted to flow through the house. This stair canyon leads out into the natural beauty of the Black Forest, allowing steps in the landscape to cascade through the house.
The interior is lined with picture-frame windows of varying sizes. Each one gives a different view of the landscape, from a 50 km view towards the Rhine valley, to a five-metre close-up of a pine tree in the back garden.
Together the windows create an indoor exhibition of the Black Forest; embedding the house Cloud Cuckoo in its setting, and shaping its character.
The new structure is made from prefabricated timber panels. Locally sourced and with a lighter weight than concrete or steel, prefabrication enables fast construction time, allowing the building to quickly be made weathertight before the cold Black Forest winter.
Built to the German Passivhaus standard, the house has a highly efficient, well-insulated building fabric, resulting in ultra-low energy consumption for heating and cooling the building.
Inside the ceiling is made from the same Black Forest silver fir, inlaid with flush LED light slots. A central chandelier illuminates the point where the two buildings meet.
Externally, the original structure is clad in slate. The timber volume is clad with locally sourced silver fir, pre-treated to gracefully weather to a natural appearance. 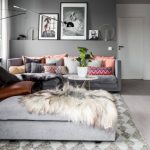 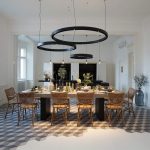