ZHA – Zaha Hadid Architects has been declared the winner at the competition to build the new Klenoviy Boulevard Station 2 in Moscow, Russia. Take a look at the complete story after the jump.

Transporting 2.5 billion passengers each year with a peak daily usage of almost 10 million, the Moscow Metro continues to expand to serve the city’s increasing population that has grown by more than 3 million (over 30%) to 12.5 million people in the past 20 years.

The new Bolshaya Koltsevaya Line (Large Circle Line) is the city’s third orbital metro line and will significantly increase the capacity and connectivity of the network. Approximately 58 million passengers have already used its sections that opened in 2018. The entire new orbital metro line will be almost 70km in length when completed in the coming years.

At the heart of the Nagatinsky Zaton district in the city’s southeast, Klenoviy Boulevard Station 2 will be the interchange between the orbital Bolshaya Koltsevaya Line and the future Biryulevskaya Line that will connect Kuryanovo and Biryulyovo districts to the south directly with the city centre.

Located at Klenoviy Boulevard’s intersection with Kolomenskaya Street to optimise convenience for residents throughout the district, the new station will also offer access to the popular Kolomenskoye Museum-Reserve and its 390-hectacre park on the banks of the Moscow River.

Providing intuitive navigation throughout, the design incorporates new innovations in lighting and passenger information systems to define the next generation of stations on Moscow’s renowned metro system.

A series of columns on the station’s platforms are shaped to express instances of the same form being marginally distorted as it moves through space, with each column being a slight variation in form to signify its distance from the centre of the platform.

The columns are developed as ‘arrows’ that direct passengers and also integrate lines of light on the ceiling and the floors to provide way-finding, functional lighting and signify platform edges.

The station’s lighting has been developed to enrich the environment and orientate travellers as they navigate through its spaces. Platform lighting conditions adjust to inform waiting passengers of a train’s impending arrival, while a dynamic lighting system further enhances passenger orientation throughout the station. 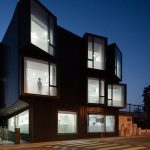 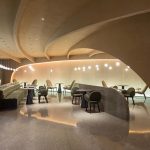