By 2015, the Esplanade Tower will fit into Fribourg’s skyline.  The tower is a 60 meter glass skyscraper of 18 floors that is anticipated to become a landmark of the new downtown.  The downtown area has a long and rich history.  It is layered with the transformation of its historic districts, stratified along lower and upper terraces.

The tower’s facades respond to the conditions of its placement.  The north-west side, which faces the former station, is smooth and austere.  The south-east side, facing the medieval town and the urban developments, is expressive – full of corbellings and balconies – inciting a dialogue between the historic face of the city and its new developments.

The tower will be mixed use, including a commercial area, office spaces, a restaurant and housing. 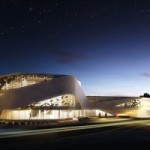 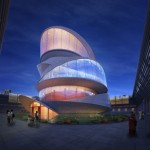