The £25m scheme sets out to create spatial juxtapositions where people of different age groups and religious faiths can meet in an informal play-learn environment. 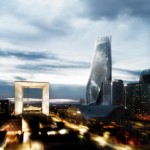 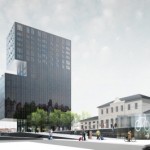