NAS Architecture practice has won first prize for their proposal named In Between Museum, by participating in an international competition organized by Berlin Natural Science Museum. The Museum of Natural Sciences in Berlin is inscribed from over 170 Museum across the city and the project site is located right next to the Berlin Zoo.

The Museum of Natural Sciences in Berlin is inscribed from over 170 Museum across the city . The project site is located right next to the Berlin Zoo. The site is strategic from the train stop which is situated south of the plot. The school buildings complement the surrounding urban fabric . The design of the Museum is supported on a wish of mix different programs related to research, education and exposure to create an interactive and interconnected space. The first idea is to build on the foundation of a Museum of Natural Sciences in the approximate maximum nature and which is exposed to the interior. Not to build a tall building we have chosen to bury most of the museum and offer a ground floor open (visually) playing with a topography featuring a cityscape. To be found on the Museum volumes rational that resume surrounding typologies and street alignments. These volumes are intended for easy operation and remain in connection with the Museum with large patio overlooking exhibition spaces. The physical connection between the different levels is from the Lobby located in the central volume. The most ready line railway Volume is composed of a thick wall in order to distance the noise and vibration of the train. The facades are treated to reflect the surrounding landscape while protecting from the sun. The inclination of the reflecting Pannels is to open to the north and capture and indirect light.

The facades of the ground floor are very transparent in contrast to let the look to exhibitions, distributed throughout the topography. Museum comes to blend into the landscape and the post is in response to the trunks of trees. The Museum is an extension of the Zoo and the Park making the transition from both sides of the track. Front of the Museum, a large plant site is available to visitors and residents. This space is penetration into this landscape in which we wander at will. Museum unfolds gradually as we advance and stimulates curiosity is not fully visible from the street.

The museum wants to be the transition between nature and urbanity kind of wink to the evolution of man in his environment. 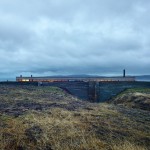 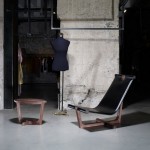