Project: The Museum of Energy
Designed by Arquitecturia
Authors: Josep Camps & Olga Felip
Collaboration: M. Agudo, I. Sola, A. Horta, J. Farres, A. Serrats
Client: ANACNV
Location: Ascó, Catalonia, Spain
Website: www.arquitecturia.net
Arquitecturia shares with us this impressive project for The Museum of Energy located near river Ebro at the entrance of Spanish city Ascó. For more images and architects description continue after the jump: The Museum of Energy is located at the entrance of the city of Asco, next to the river Ebro. Through a careful approach to the site by an analysis at different levels and also, by a research for references to be incorporated at the proposal, the citizens become to be familiar with and take ownership of the new public and private spaces. At an urban scale, there was the opportunity of solving the end of the industrial area – a built system of mute containers-. At a territorial scale, we understood the strategic location of the site, between the landscape and the urban core.

Therefore, the museum needs to be anchored between public and private, between the river and the topography, between urban and landscape. Because of this, one of the principal aims of the proposal was to reconfigure the site and its sourrunding understanding its BOUNDARY condition.

The Museum of Energy weaves together several social and physical realities. It generates a new space in a currently undetermined place and links urban to landscape. This interlacing of different realities is dealt by three different stages of a promenade. At a first stage, the visitors are RECEIVED, at a second stage, the exhibition content is SHOWN and at a last stage, the views toward the landscape are FRAMED: to RECEIVE, to FRAME and IN-BETWEEN, the content is SHOWN. 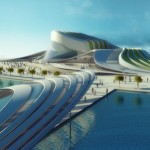 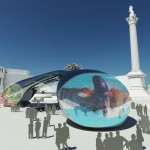