The RW Concrete Church is located in Byeollae, a newly developed district nearby the north-east region of Seoul. We envision a new landscape situated between nature and the artificial, creation and extinction, rather than a building on a complete urban fabric. The church is set to become part of a new urban environment, materialized through its simplistic form, unified materiality, and program-based continuation of space.

Site accommodating simple volume and unified material merges with the multitude of desires originating from the newly developed district. Concrete, as both the structural and basic finishing material, displays its materiality throughout the church, and in contrast serves as an abstract notion, representing the solid materialization of grounded place. Material reveals its solidity as a metaphor of the eternal religious values in an age of unpredictability. The cross which is the symbol of Christianity unifies with the building using a vacant head of a staircase, rather than erecting a huge tower. When advancing in to the piloti elevated building, one first encounters an empty concrete courtyard on the first floor. The courtyard is simultaneously a place for interaction with the local community and a flexible space that accommodates daily changes in religious programs. Passing the transparent lobby and mounting the stairs, as soon as one adapts to the darkness, a bright space is revealed. Inside the protruding 6 meter cantilever, the internal hall is an inevitable passing place to enter into the main chapel. This place becomes a physical and spiritual intermediary space, connecting the every-day with the faith. The chapel is a softly sloping singular space, emanating a feeling of comfort as if worshipping on a gentle hill. The mellow light from the long and narrow clerestory embraces the entire chapel, as if breathing life into the still space. 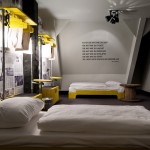 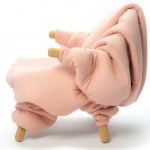