The Steering Committee of the French Rugby Federation (FFR) has retained the services of Populous and Ateliers 2/3/4/ for the design of the Grand Stade FFR. After several months of discussions with three competing groups, the FFR has made its choice of designers and has issued the first computer-rendered images.

The FFR Grand Stade will be much more than a stadium; the 82,000 capacity venue will become the ‘national stadium of rugby’. It will host all the French rugby home matches, and also accommodate conventions, shows and a broad range of sporting events thanks to its multi-purpose design. The retractable pitch will endow the FFR with the best quality pitch amongst all the major rugby stadiums in the world. The retractable roof will deliver a more intense atmosphere, it will ensure matches are played whatever the weather, and will create the largest roofed entertainment venue in Europe. Four large video boards are part of the multi-purpose facilities, allowing the broadcasting of replays and extra technical information.

The stadium has been designed to contribute to writing the future of the Fédération Française de Rugby and of French rugby. Its architecture echoes a fortified town delivering both hospitality and protection, with white stone echoing the quarries in Baux de Provence. Within this protective venue, the Plazas des Bandas, the general admission arcades, the multi-level lounges, the corner suites and the presidential box make a variety of outstanding and unique spaces that are there to catalyse the fervors of the French rugby fans. The heart of the stadium lies under the protection of tall mineral walls and large glass windows looking onto the finely cut bowl, which will create a vibrant atmosphere. There will be between 17 to 20 events a year, including five to six games of the French national rugby team and the final of the TOP 14. 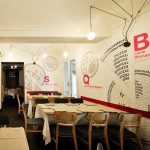 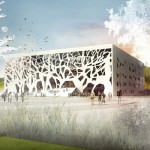