BaO collaborated with KJYAO (Beijing) and Pd'AA (London) on an exciting project for the Busan Opera House competition in South Korea. The site of the competition was located on a reclaimed island in the middle of existing docks that will become in a near future a new cultural zone for Busan Metropolitan City. We proposed an OPERA ON THE MOVE as a creative response to the evolving nature of opera in the 21st century, setting new standards of presentation and production in the performing arts. Our projects advocates both a programmatic dynamism(Opera = open cultural center for everyone) and a much more literal kind of move. We envisaged that a fragment of the Opera House could detach itself from the main body of the building and sail across oceans to dock at venues around the world! If opera and theatre troupes keep touring the planet to give performances, why couldn't the building itself do so?

One single mega-structure literally splits in two and open up a whole new range of possibilities. Locally the movement of the floating theatre enables new configurations and new programs to appear. Globally, the floating nomadic icon traveling around the city, the country and the world would become a cultural phenomenon proudly promoting Korean arts around the globe.

Moments of departure when the floating theatre casts off, sails away, or appears suddenly in different locations on the five continents, or when it returns after a long journey to its "mother ship", would surely become wonderful events and playful spectacles. Architecture is here in a way part of the show, architecture becomes choreography, architecture gives a performance. On the Move. We responded to a brief that was clearly stating Busan's ambition of building an architectural icon recognized and recognizable globally. Our proposal goes one step further by designing a twofold icon: an impressive large scale mother ship and a nomadic fragment that would separate and export the symbol of Busan and Korean culture in other parts of the world.

The audacity of the main concept is more than a simple "architectural special effect". The possibility of movement generates a great flexibility of usage and settings for the Opera House and permits the creation of new types of spaces, atmospheres, programs and conditions for events that usually never occur in Opera Houses.

When the building is in its combined position (theatre at dock), the positioning of the spaces permits to couple, separate, link or seal the performance spaces. When the theatre cast off and is anchored 50m away in the dock, an outdoor auditorium, that one can still access from within the building, appears on the roof. The lobby is also transformed and expanded in a semi-outdoor dock between the two main performance spaces where more informal kind of events can take place.When the mobile theatre is offshore, its negative void is reused and reinterpreted in the main building as an active asset. The new type of conditions that the dock embodies pus forward qualities of a rough harbor and hard space contrasting sharply with the delicate atmosphere of Opera House and the softness of the auditoriums.

Negative / Positive. The floating theatre was conceived as an abstract piece of building that resembles a weird geometrical sealed volume. The uninhibited "carapace" of the theatre was directly derived from its program (vertical fly box, main-sides-rear stages holy cross, auditorium blind box, sloping outdoor theatre on the roof) so as to expose a spatial organization that is usually hidden in traditional opera houses.When the floating theatre casts off, a formal play between voids and plains, negative and positive, starts occurring. An outdoor stepped theatre appears on top of the mobile element as it separates itself from the lecture hall in the main building.

The strange inverted void advocates new possibilities for programmatic renaissance where maybe more contemporary types of performing and popular arts could take place (rock concerts, festivals, poetry, improvisations, etc…). The cavernous imprint left by the theatre is both a spatial cavity and a void for informal spectacles not on the fringe of the building but right within as if the Opera House of the 21st century would embrace and welcome any kind of spectacle.

Public Cluster. The idea of theatrical dialogues between voids and solids was further developed in the envelop of the whole building. The Opera House is organized around the 3 enclosed core performance spaces (Opera-2000 seats, multipurpose theatre-1600 seats, lecture hall-450 seats) . All the auxiliary programs that are present either to help them function (backhouse, technical, administrative spaces) or to help expand the scope of the building into a cultural and educational center (libraries, workshop rooms, training and convention center, leisure and commercial spaces), literally revolve around the three central entities.

Each program has its define box-like space that is stacked, shifted, connected, juxtaposed, clustered on top of the other one, to a point that the accumulation and aggregation of all these usages form a porous three dimensional envelop. Lobbies, foyers and generous circulations are freely created in between the clustering public cultural programs and the auditoriums. We believe the rich array of voids and plains, defined and undefined,negatives and positives, advocates an openess that would have made the Opera House an active and lively places all day long and for everyone. 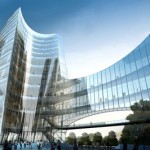 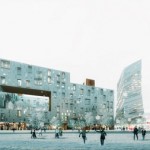