The rich culture of Turkey includes a monument to human achievement, invention, and practicality – a site called Cappadocia.  More than two thousand years ago, the people of the region sought a strong, permanent and imposing shelter. Inspired by the natural geological formations in the region which withstood all natural on sloughs, the people carved and “engineered” homes and public spaces within those natural rock formations.  They did this with such skill and esthetics that it still echoes today with vibrancy and life.

This is the inspiration for our “ROCK-SETTE” as fulfillment of its functional requirements.  There are also two significant additions to the site which reflect in its architectural vocabulary – the tracks of the nearby metro station to the east and the creek to the south.  The reflection of their smooth curvilinear lines expresses by their intersection and interaction a direction and accelerated form change.  The north-south orientation of the extended site has a drop off of about two meters which allows the building to naturally blend with its environment in a sustainable way.  The edifice is also oriented and composed to get the best of the natural resources that the site offers.

The shape grammar is carefully and surgically implemented, revealed as Modern Abstract Expressionism where sculptural expression takes charge.  The recreational area with the entire vertical connection is borrowed from ancient times when people traveled by donkey.  The ramps in the building, which are the major connections between levels, echo this.  When people move between levels and explore the interior sculptural space, they become unintentional visual “exponents” for people entering the building.  The space by itself creates a narrative that one can only understand by passing through it.  Each view has its own “story” with a unique identity, but taken together they form an orchestration of timelessness, exuberance, and excitement.  The methodology is similar to that of a sculptor who smudges, curves, ads, and subtracts from a ball of clay the necessary substance to form a work of art.  This “work of art” is also carefully engineered to make it sustainability efficient and entirely energy self-sufficient.

The building is intersected by a passageway, running north-south, which connects the back parking lot on the north with the main entrance on the south.  The two volumes, one on the west and the other on the east, are connected at the second floor by a dramatic atrium with a glass elevator running through it from the parking level in the basement to the roof structure.   At the back parking lot an outside ramp climbs to the second level, giving an opportunity to view the rock-like formations of the building.  The ramp enters the building next to the two-level café/bar, which introduces the food court where conference participants may enjoy whole meals, snacks, or just coffee.  Next to the food court is a fully equipped kitchen on the first floor and a preheat kitchen on the second floor.  A freight elevator connects these two kitchens with the back parking lot for supplies.  This elevator is also used to bring food cooked on the second level to the preheat kitchen.  Two areas of congregation, the Conference Hall and the Planetarium, are each situated in one of the two main volumes of the facility.  Gathered around them are areas for similar activities, defined at the convenience of lecturers. The Conference Hall is flanked by the Exhibition Hall, the Orientation stage, and Children’s Section.  And the Planetarium is flanked by the 4D-Video Display Room, the Fire Fighting Training Room, and the Rainstorm Simulation Section.   At the far northeast corner is a third section positioned as two separate volumes.   In the northwest volume at the first level is the Library.  Two levels above and supported by hydraulic equipment is the Earthquake Simulation Section.  This volume is highly visible from the back parking lot and it becomes an attraction when the upper level is put in motion.   At the end of the northeast volume of this section are the Smoke Maze Room and the Shelter for 150 people.   For emergency egress, the Shelter connects via a bridge to a hillock on the east side of the property.  Through excavation, this hillock forms an Amphitheater for outdoor evening activities and daytime lectures.   It is bordered with a pleasant view of the building and an artistically arranged landscape and garden.

The entire approach concerns the blend of Nature with high technology and arrival at a solution which represents both our present and future.  The technology and materials chosen are recyclable – ferroconcrete, stainless steel, and natural glass.  People in Europe lay smooth and beautiful concrete, as this material is the closest to natural stone.  By laying the concrete without any pores, bubbles, or air pockets, it doesn’t need to be plastered but only painted in the Old Italian Venetian style with two subtle shades of natural looking stone. New computer technology allows 3D modeling to be paired with construction technology to erect the building in the most efficient way (so the construction company chosen to execute the project should know this new approach very well).  The metal is exposed stainless steel that does not rust, and it exposes the very basis of its nature.  To paint it would be to lose its character and soul.  The building is kept clean with a very small pallet of colors where exuberance and strong geometrical composition define the building rather than a veneer of colors.

ROCK-SETTE is this type of architecture wherein art, rich cultural history, high technology, and contemporary vision come together.  To do it, the deep history was analyzed, abstracted, and with a minimalistic approach, the essence of a shelter within rock formations was developed into a rich architectural pallet.  ROCK-SETTE was done by people for the enjoyment and education of people.   Each volume, an individual piece of glass, a mullion is an essential part of the entire composition.  It has a democratic approach wherein the individual is not abandoned, but rather nurtured.   ROCK-SETTE is for the people of Turkey. An important issue for the facility is also how to make it function as a “Green Machine in the Landscape”, to be self-sufficient, and non-polluting.   The creek, passing on the south side, brings fresh water as a feature of self-sufficiency.  The water is purified and brought into the property where several artificial ponds are arranged with the building standing over them.  The cool air from these ponds is brought indoors to cool the interior naturally, with diffusers in the floor plates and walls to distribute the cool air.  The water from the ground level drops down at the back parking level to create a cool and pleasant natural effect for people arriving at the facility.  Solar panels on the south-facing roof are sufficient to satisfy all the facility’s electrical power needs. The building has two nuances of the same idea developed on the exterior of the building’s south half where it is completely screened with perforated metal panels which filter the light of hot summer sunrises and which create a comfortable environment.  This feature can drastically lower the HVAC bill and pay for itself in the long term.  Additionally, it creates a beautiful architectural feature which marks the entrances on both the north and south sides.  It is done in a way that not only satisfies the functional needs but also is an important architectural addition.  On the north side, the building is completely open and playful.  The natural rock formation vocabulary makes people stop and see it as a reminder of Cappadocia which has survived for millennia and still remains strong. 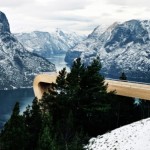 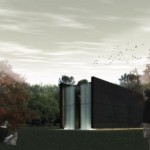