Tanzo Space Design have recently completed works on this inspiring boutique in Beijing, China. Take a look at the complete story after the jump.

From the architects: In my city, time is running backwards; dead trees are awakening in spring;all the disappeared smells, sounds and lights are recalled. The demolished siheyuan, hutong and temple are restored to their original appearance. The tiled roofs are like sea waves running to the low-rise skyline. Pigeons are whistling in blue sky; children are familiar with the changes of seasons, and residents stand firm in faith.
–City Gate, Open Up by Bei Dao

When it comes to Beijing, most people will immediately have a map in their minds, on which arrays of boxy buildings are closely packed. If viewed from the perspective of clouds, the capil-lary-liked alleysare the soul of this capital city: that is hutong. Despite the rise of reinforced con-crete structures, hutong still exists and records the trivial daily life of common people in the city with its leisurely image, holding the city’s most original memories.

Strolling in Wudaoying Hutong, a clothing store called “Naqu Shuiyue” is located in the noise of street along with many other shops and cafes. As the second Nagqu store opened in this hutong, the owner Mina invited an old friend, the interior architect Wang Daquan, to design the space for this brand again. Based on his unique insights into traditional culture, Wang Daquan looks at the past and the present in the form of overlapping four important elements. Eventually, the Naqu Shuiyue store, which is imprinted with historical context, has become a small window for observing the city.

The first element in quartet
Containing the old past

As an old part of this city, the bricks and tiles of hutong are wrinkled skin, and the beams under the skin are muscles and bones, being the soul of the old building.

The fully retained beams support the spirit of space, and the lightly wrapped color paste provides a simple ground color for its soul.

The cement has rough and bold texture and the bamboo curtains have fine and elegant form.
Among the shadowy ripples generated by the collision of objects, the lines of gown appear particularly clear and plain.

The store was born in hutong and will grow there. The structure of house already exists, so, the design is to create more possibilities for its interior.

The name “Shuiyue” comes from a pool of water in the store, full of the artistic conception of water returning to courtyard from four directions. In the event of rain, raindrops will fall down along the eaves, and the pond will collect them, conveying an expectation of life and growth in nature.

Acer palmatum stands in pond in the form of an island, revealing its unyielding tenacity in the soft water.

When people look at it from the glass window inside, it also gazes at the inside space right out-side the window. Therefore, it presents different expressions according to the unpredictable changes of four seasons.

In various colored crude potteries, there are plants that bloom and wither according to the season.

The flowers such as rosabanksiae, pomegranate, osmanthus, and wintersweet are seeking changes in the ancient building, bringing a new sense of freedom.

The third element in quartet
Surge of time

The weather changes, the light and shadow change too. The breath of people in space changes, so does human thought at every moment.

One cannot step into the same river twice, just as the beauty at the moment will collapse and fall apart in the next second, and then it forms a new color and picture.

Since it is impossible to catch all the changes at every moment, it is unnecessary to persist or complain about it. And design shouldn’t put itself in the position of omnipotence.

When a design allows unsatisfactory things to occur and develop freely, and leaves enough room for the unpredictable light, shadow, and scenery to be displayed, it will have a new impression for each encounter.

The fourth element in quartet
Peace of mind

Let yourself hide in rain, play the Chinese zither and make tea. Things appear clearly in front of you, and dimly in the light.

In the intervals between contemplations, occasionally there is a blank space in mind, which is shrouded by the current ease unconsciously.

The pool of water seems ready to come out, and the water is reflecting the mental state of truth and goodness.

Regardless of the function of clothing store, the significance of this space is interdependent and growing together with people.

The project shows traditional culture through contemporary elements, preserving the continuation of hutong history. It reflects the culture of an entire city from a partial miniature, expressing the best respect to the past and present from a generation. 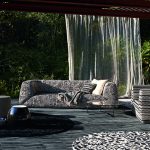