Architecture firm QuattroAssociati transformed a deconsecrated church into a new design-driven hospitality space that hosts the new Hotel NH Collection Citylife. The architects undertook the renovation of the 1934–1990 abandoned Chiesa Cristo Re church, as well as designing all of the custom fixtures and furniture. It creates a strong link between historical components and modern living requirements.

“We set out to reinterpret hotel spaces by safeguarding the existing building’s spatiality, respecting its decorative layout and hallmark architectural elements, deploying a continuity- and permanence-led approach to the historical evolution of this piece of architecture”

The new NH Hotel Group location, the chain’s 12th hotel in Milan, is located at 14 Via Colleoni, in the hip and newly built CityLife neighborhood, which for many years served as the city’s fairground sector. A former church structure that was once an enormous, recognizable cathedral made of beautiful white stone and with a 13-story tower attached has been turned into a genuine artistic and architectural masterpiece. The church was to be deconsecrated, according to a directive from the Bishop of Milan in 2017. In order to provide this magnificent 4-star hotel to the people of Milan, it was later purchased by Igefi Group and CLH srl, who collaborated with the Quattroassociati design firm. NH Hotel Group later joined the project.

The church structure, which has a three-aisle Latin cross floor plan, has been partially preserved and now serves as the hotel entry. It still has its original wooden doors, semicircular arches, and rows of pillars in the side aisles. With the intention of forming a single design image, all of the service facilities, conference rooms, the restaurant, and the rooms were added to the initial concept. The new architectural plan is based on the original church design but has been updated with classical and civil architectural style aspects that were common in Milan in the 18th and 19th century after being stripped of its conventional religious components. The space created by the vertical expansion of the building and the presence of natural light have been fully highlighted to create a building with a new purpose in continuity with its history. Universal non-religious structural and spatial elements have been highlighted, such as columns, capitals, and rib vaults with their sculptural and decorative features.

The lesene, a softly protruding vertical pillar embedded into the wall with a decorative, non-load bearing function, which serves as the connecting element throughout the hotel building, emphasizes the heights and vertical development. The gilded organ at reception, the features of the cocktail bar and restaurant, the cascade of light in the lobby, and the slabs in the Venetian terrazzo floor all contain vertical lines that are a part of the compositional design of the 13-storey tower façade.

The hotel has 185 rooms, including 10 duplex suites built above the central nave, and 175 rooms in the adjacent 13-storey tower. It provides comfortable, distinctly one-of-a-kind lodging so that visitors, particularly business travelers, can enjoy Milan in all its splendor as a city of art and tourism as well as a center for business. Thus, NH Group added 6 sizable meeting rooms, a sizable private garden for holding various events, a garage, and a round-the-clock outdoor gym.

At the district-inspired Tailors restaurant, where chef Gabriele Grisolia, a native of Basilicata, serves traditional meals, both guests and urban dwellers are welcome. The District cocktail bar, the latest place to be seen for the Milan social set, is located on the exclusive rooftop area of the hotel, which is its most prized feature. 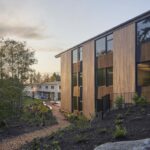 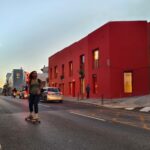