Design and engineering team Petr Tej, Marek Blank and Jan Mourek completed a 130 m long ultra-high performance fiber reinforced concrete footbridge that connects the largest island on Vltava River with the land. Take a look at the complete story after the jump.

From the architects: Lužec nad Vltavou is a village in Bohemia near Mělník in the picturesque floodplain landscape of the Vltava River. Since 1907, when the lateral canal between the villages Hořín and Vraňany was built, it has been the only village in the Czech Republic that lies on the island with its entire territory. The island is also the largest island on the Vltava River.

The footbridge runs across the innavigable river flow between the villages of Lužec nad Vltavou and Bukol. The bridge is on the long-distance north-south cycle route EuroVelo 7 leading from Sweden to Sicily.

The architectural design is based on the lightness and subtlety that are made possible by the technologically extremely advanced material UHPFRC (ultra-high performance fiber reinforced concrete).

The footbridge is conceived as a suspended structure with one pylon and two fields with spans of 30 + 100 m. The main field crosses the river with a width of 70 m. The bridge deck is led in a high-rise arch with a radius of 777 m and is composed of directly walking prefabricated segments from UHPFRC. The hinges consist of 17 pairs of locked steel ropes.

All elements of the structure are unified and dematerialized by tones of medium gray color.

The footbridge is connected with the landscape by a newly planted oak alley along the road on the Bukol side. The oak trees will grow to the height of the pylon. 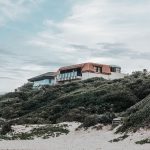 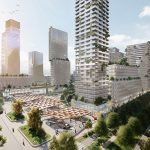