The house, conceived as a second home for a family who lives in Switzerland, is in a special location: it is 50 meters from the beach, between the dunes and the woods of pines, and near the ruins of Ampurias.
The plot is rectangular in shape and has a regular slope in the direction of the beach. Its southern end, the sunniest, it is at the same time where the best views to the sea are. It is at this point that it was designed a large terrace to which you can access from the living room and the kitchen.
When we start digging we found two tombs from the Roman period and a Greek. Our plot, between the old city and the sea, was part of its necropolis. The project conceptually it is an allegory of the relationship between the world of the living (white) and the world of the dead (stone); both separated by a thin line, in the project, of galvanized steel. The stone, the existing walls, the excavation, the Roman and Greek worlds, are very present throughout the project.
The house is divided into two floors, the lower floor, dedicated to services and amenities, is designed in a way that it is open to the rear side of the garden and to a pine forest that descends to the beach.
On the top floor there is a living room, a dining room – open to the large outdoor terrace – a guest toilet and two rooms for the children with a bathroom for each of them, and also the parents suite, with a spacious room with a walk in closet and a bathroom with a shower and a bathtub.
On the lower floor there is a guest room with its own bathroom, a multipurpose room with some space for an office, a TV and a bar, a dressing room, a room for washing machines, a garage for two cars and wine cellar.
At the entrance there is a big glass that allows transparency of the two facades, facing to a nice tree that allows the owners follow the season changes on it, in the distribution hall between the day and night areas, and opening the space to the rooms to the sun and the views.
The day area blends into the garden through a large porch that connects the inside with the pool and the sea.
The kitchen is located strategically, maintaining its own space bounded by a central island, but at the same time enjoying the relation with the outside.
The facade of the upper floor, all white, is playing with textures. Part of the stone walls, are lime whitewashed.
In the plans that are a little bit hidden from the principal plane of the facade, in the rooms and the skylight, there is a specially designed vertical sequence, composed by the golden proportion related to their height, which creates a play of light and shadows throughout the different phases of the day, giving life to the façade.
The materials have been used, following the concept of the project, and are different on the ground and underground floor. On the ground below, where a perimeter courtyard floods with natural light all the rooms, the pavement is a continuous magnesite floor, with its natural color, and upstairs, the floor is made of an American oak wide plank of 24cm long and variable in length.
The result is a comfortable, functional house, with plenty of natural light and intimately connected to the Mediterranean Sea and to the ruins of an ancient civilization. 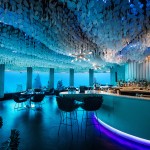 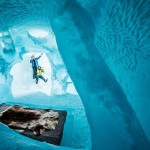