The 400 m walk to reach the waterfront of the "claridade" beach in Figueira da Foz, isolates the city and its inhabitants from the sea.
The prominent shape of the coastline in Buarcos is the starting point of a linear gesture that stretches along the whole waterfront of Figueira da Foz, sewing together the existing promenade and the beach front, and ending at the tip of the northern pier.
Along this new path, one is confronted alternately with both the sea or the city. This gesture takes people to the beach and brings them back to the city. The new promenade is structured in such way that it approaches the city at the intersections of the main streets, and projects itself in intervals between those points.
The proposal is for a light concrete structure that "fly's" over the dunes allowing for a gradual and controlled re-naturalization of the area between the existing promenade and the waterfront.
The new promenade generates new "pockets" with specific atmospheres and programs that relate alternately with the city or the sea. 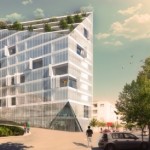 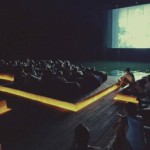