For more about this project continue after the break: Whit Two Trees as our client, SHoP and Field Operation's master plan for the Domino Sugar site replaces a city-approved 2010 plan whit a new proposal that adds 60% more publicly-accessible street grid; provides for a new 24/7 mix of office, residential, neighborhood retail, community facilities while retaining original commitments for affordable housing; and a new form of open architecture that connects the existing neighborhood to thenew quarter-mile waterfront. Most strikingly, the plan envisions a new skyline for Brooklyn–one that relates to the height of the Wiliansburg bridge to the south and scales down to meet the lower buildings across Kent Avenue to the east. Central to the scheme is the renovated Domino Sugar refinery building, which will become the nerve center of the project as a new office building across from a new public space, Domino Square. The new surrounding buildings are porous, featuring large openings that allow light and air to penetrate through the site into the neighborhood beyond. While exuberant on the skyline similar to the new architecture being built around the word, the buildings responsibly meet the ground and the Wiliamsburg street grid. 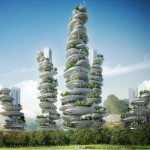 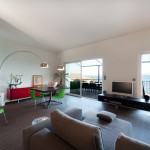